The long-awaited but incredibly elusive moment electric vehicle advocates have been hoping for is finally here: a Tesla Model 3 for $35,000.

In a surprise announcement today, Tesla Motors just introduced its long-awaited $35,000 standard Model 3, a long-sought goal for the entire electric vehicle market that has proven elusive up until today.

Tesla’s long-term goal has always been to make a mass-produced electric vehicle that retails for $35,000 or less. This is considered the price point where the average automobile consumer can afford to purchase a new vehicle, which takes Tesla out of the luxury car class and puts it squarely within the budget of the general public.

There had been considerable concern when Tesla removed the standard Model 3 option from its website this month, but it is now clear that this was likely in preparation to begin taking orders for the vehicle today.

In a statement released by the company, Tesla announced that the company would be shifting all sales of Tesla vehicles online. The company says this is necessary to be able to sell the Model 3 for $35,000 and still remain a financially sustainable company. 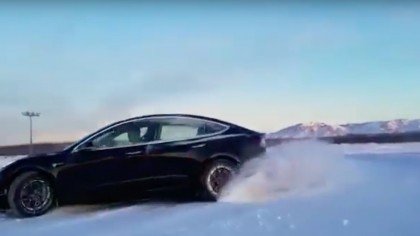 The company also said that in lieu of a showroom, North American customers can order their Tesla Model 3 in about a minute over the phone and enjoy a 7-day or 1,000-mile trial period during which you can return the Model 3 to Tesla for a full refund.

“Quite literally, you could buy a Tesla, drive several hundred miles for a weekend road trip with friends and then return it for free,” the company’s statement said. “With the highest consumer satisfaction score of any car on the road, we are confident you will want to keep your Model 3.”

The shift to online-only sales has allowed the company to lower the price of the Model 3 by about 6% on average, Tesla says, allowing it to reach its goal of introducing the $35,000 standard Model 3 earlier than anticipated.

The Tesla Model 3 Standard Edition at a Glance

According to the company, the standard Model 3 will offer a range of about 220 miles, a top speed of 130 mph, and 0-60 mph acceleration of about 5.6 seconds. The company says that the car has all of the features that earned its longer-ranged Model 3’s a 5-star safety rating, which the company says “has the lowest probability of injury of any car ever tested by the U.S. Government.”

In addition to the $35,000 model, Tesla is also introducing a Model 3 Standard Range Plus, which has a range of 240 miles, top speed of 140 mph, 0-60 mph acceleration of 5.3 seconds, and a majority of the Model 3’s premium interior features for $37,000 before factoring in government incentives.

“For 6% more money, you get 9% more range, more power, and an upgraded interior,” the company says.