The lively, effective and engaging science videos done by artist Álvaro Gracia Montoya has been gaining the YouTuber many supporters.

In the past decade, the vast and seemingly endless capabilities associated with 3D art, 3D printing and 3D scanning have taken center stage.

From apps that walk you through the 3D scanning process, to the unprecedented rise of 3D printed buildings, we have all become obsessed, in one way or the other, with all things 3D more than at any other time since the technology first began to appear 30+ years ago. Although it is not clear whether the increase in popularity reflects larger improvements in the field, or is simply the result of more product-driven support for 3D technology, every day new and surprising applications are appearing.

One of the latest examples is 3D designer Álvaro Gracia Montoya’s project, “Solar System Size Comparison”. The bilingual YouTuber shared the video on his channel, which he describes as a “channel of machinimas, 3D animations, comparisons, short films and special effects”, one of many done in his London-based MetaBallStudios (MBS).

Montoya explains how the aim of the project was to create something original and add to the body of information out there about our Solar System: “This comparison demonstrates the size of some of the most important celestial bodies in the Solar System: planets, dwarf planets, asteroids, and satellites. Although this type of comparisons are very popular and there are several versions on the Internet, I have decided to make my own version since it is one of the easiest comparisons I have made, it was not a big problem to do it. [This] part can add information that others do not have or [offer] a different visual aspect.”

The artist always picks an interesting focal point to serve as the background: in this case it’s the site of Tugunska, the place in Siberia where an asteroid made contact with the Earth on June 30th, 1908, obliterating several animals and trees in the area—it was not even until 1927 when Russian scientists were able to capture the first images of the site.

After giving the Tugunska Event meteor a size of 0.1km, and reinforcing the scale concept by placing it next to a scaled-down image of a commercial aircraft, he moves the viewer through the Solar System, quickly comparing the sizes of each planet and their respective moons side by side.

Montoya recently completed another video, “The Solar System on a Smaller Scale”, using only Adobe After Effects.

He first scaled down the size of the Sun to a diameter of only 139cm, setting it against a map image of the island of Manhattan to illustrate, first. the size of the other planets, and then their relative distance from the Sun. 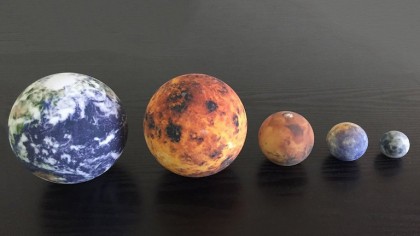 He even calculates the distance to Proxima Centauri, the nearest star, giving it a distance of 39, 960 km from the location of the Earth (Although he did commit the scientific crime of including Pluto in the video, let’s hope for now that the critics will forgive this small oversight.)

The detailed illustrations and smart editing choices help the images come to life, and through his unique DIY approach to understanding science, Montoya does a good job of taking a conceptual scientific topic and simplifying it in a way that is focused and easy and to follow using his own creativity.