Computer software animators have to move the limbs of the characters they are making for animations by using a computer mouse or stylus. They have to tediously move the limbs into place one key frame at a time. However, their job could be made much easier as researchers at ETH Zurich in the Interactive Geometry lab have now designed a different way of being able to move virtual characters via 3D joysticks. The joysticks can create shapes and movement inputs. 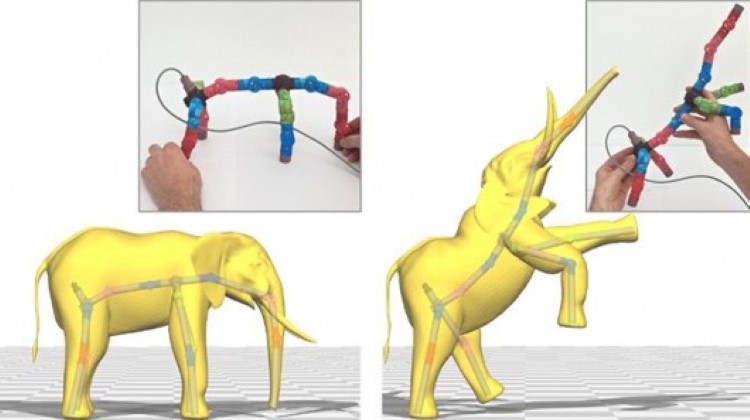 They are working along with Autonomous Systems Lab, the lab team is headed by Professor Olga Sorkine-Hornung and they have devised what they call an Input Puppet. The puppet comprises of a set of 3D printed modular construction blocks, which may be connected together to resemble any character the animators want. Each of the joints has sensors integrated in them which are able to measure the bends angle or how many degrees of twisting motion the character has. The model can then be used to transfer information directly to the software, which then works out the way in which the virtual character should move.

"The software assists the artist in registering their newly assembled device to the character’s shape," explained Professor Sorkine-Hornung. "Thus, the artist can match each actual joint of the input device to the corresponding virtual joint of the animated character. This way, even if the input-puppet features a rather short neck, it can be fitted to an animated giraffe's long neck."

However it isn’t just researchers from Zurich that have the goal of making direct input devices, there are many others working on virtual character input technology. These have included puppets which are able to be manipulated with sensors having been put into the joints of the puppet. These devices are said not be as versatile as the IGL/ALS version, due to the fact that they are one standard shape.

"Anyone can 3D-print the separate units and with the help of an engineer to integrate the electronics," explains Sorkine-Hornung. "We are going to present the device at the SIGGRAPH conference and exhibition on Computer Graphics and Interactive Techniques this coming August. So we hope to receive some feedback whether there is a demand for a commercially available set and for further improvements of the device's design," said Professor Sorkine-Hornung.

At the moment the device does have some limitations as they can only bend or twist in two movements, ideally it should be a fluid motion, but the researchers are looking into an idea of ball and socket joints, so as to ensure that the input puppet can be manipulated in a more lifelike fashion.

13 Laptop Gadgets to Make Your Time with Laptop Much Easier

7 Personal Safety Devices That Will Make the Perfect Bodyguards