The State Department has conceded to the demands of a weapons site to make the sharing of files for the printing of 3D firearms legal.

A years-long battle between the US State Department and a website called Defense Distributed (DD) has come to an end this week in a settlement that favored the latter and may now introduce the "age of the downloadable gun." The story began a few years back when DD decided to start offering a 3D printed gun called the Liberator for download.

DD considers itself an open-source organization for digital firearms files however its products were not available these past few years because its designer Cody Wilson was embarked in a long-standing battle with the US government. The State Department had demanded DD be taken offline stating the website violated the International Trade in Arms Regulations (ITAR) which restricts how guns are exported.

Since the plans for the 3D printed guns were posted online, the website was effectively exporting them to other countries, had argued the State. Wilson, however, spent years fighting back and this week the government finally acquiesced to his demands agreeing to rewrite federal laws to make 3D printed guns legal. 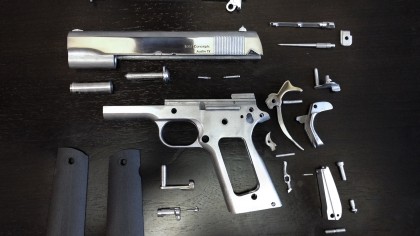 Wilson was supported in his suit by the Department of Justice (DOJ) and Second Amendment Foundation (SAF). “Under this settlement, the government will draft and pursue regulatory amendments that eliminate ITAR control over the technical information at the center of this case," said SAF founder and Executive Vice President Alan M. Gottlieb in a statement.

"They will transfer export jurisdiction to the Commerce Department, which does not impose prior restraint on public speech. That will allow Defense Distributed and SAF to publish information about 3-D technology," he continued.

The government was instructed to waive its prior restraint against Wilson, pay a significant portion of his firm's attorney fees and return $10,000 in State Department registration dues previously paid by DD. DD was quick to reveal the settlement to its customers.

The age of the downloadable gun begins

"Defense Distributed relaunches DEFCAD after reaching a settlement agreement with the US Department of State, concluding a multi-year federal lawsuit. The age of the downloadable gun formally begins," reads DD's site.

Under the settlement, new export laws will allow DD to freely sell plans for firearms under .50 caliber, including semi-automatic rifles like the AR-15. DD will begin selling its gun files on August 1.

“Not only is this a First Amendment victory for free speech, it also is a devastating blow to the gun prohibition lobby,” said SAF's founder. However, gun control advocates are already fighting back submitting Freedom of Information Act (FOIA) requests.

We're extremely concerned about a sudden settlement by the DOJ allowing blueprints for 3-D printed guns to be posted online, and we're looking forward to learning through our FOIA request exactly how this came to be. From the @nytimes: https://t.co/XuZXzNQIHs

"We're extremely concerned about a sudden settlement by the DOJ allowing blueprints for 3-D printed guns to be posted online, and we're looking forward to learning through our FOIA request exactly how this came to be," tweeted nonprofit gun control organization The Brady Campaign to Prevent Gun Violence.

Via: The Department of Justice and Second Amendment Foundation