We've already seen exoskeletons that can assist heavy lifting or even offer assistance to those disabled below knee level, but now, 3D Systems and EksoBionics have gone a step further by creating an exoskeleton that has allowed Amanda Boxtel, who is paralyzed from the waist down, to walk again for the first time in over 20 years. Boxtel expressed her joy by saying that, "After years of dreaming about it, I am deeply grateful and thrilled to be making history by walking tall in the first ever 3D printed Ekso-Suit, made specifically for me." 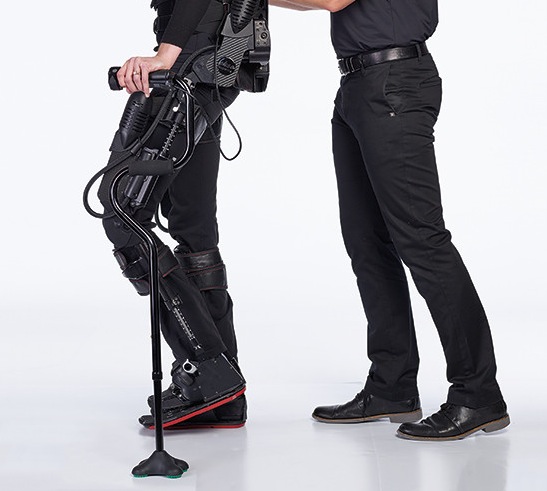 3D Systems scanning technology produced a three-dimensional reading of Boxtel's lower body and spine, allowing the exoskeleton to be completely tailor made to her body shape and contours. This not only provides improved comfort from the design, but also greatly benefits in reducing the risk of injury; as Boxtel has no sensation below the waist, bruising or wounds formed from rubbing are not immediately detectable. Therefore, wounds can become infected before even being noticed. "We had to be very careful with creating geometry that would dodge the parts of the body that it had to dodge...[designing] parts that wouldn't impede circulation or cause bruising," said Scott Summit, 3D Systems senior director for functional design.

This is where 3D printing is crucial to the design as it offers ease of creating complex and custom contoured parts compared to traditional methods. 3D Systems printed the complex tailor-made parts from the scans that would be the connection between Boxtel and the robotics, with the main focus being on both comfort and safety. 3D printing offers such complexity that the suit was designed to minimize perspiration by allowing Boxtel's skin to breathe and was made in a mere 3 months, a much quicker time than one would expect to produce something from traditional methods with such customized features.

EksoBionics then provided the sophisticated mechanical actuators and controls that produce the mechanical movement. There are currently a number of different methods of control for the exoskeleton. Users can actuate their steps either with buttons on the accompanying crutches or walker, by moving their hips or by using weight shift with the initiation of forward leg movement, thus, offering solution to people with various degrees of disability.

3D printing is continuously unchaining the shackles of difficulties found in traditional manufacturing methods and it has now offered a step forward in the comfort and safety between humans and robotic exoskeletons and a promising hope for the future of paraplegic and disabled people to walk once again.

Acer's Special Offers for June: The Opportunity to Have a New Laptop