Getting around in the snow is a tedious task. It's cold, slippery, and treacherous. Under the snow can be many hazards including rocks, caverns, ice or water. Snow machines need to be tough to make treacherous treks across the tundra. Over the years, many designs have been made to take on the challenge of traversing the snow: Here are the top 5.

The Tatra Aerosled is a German engineered vehicle which was made in 1942 with the intention to cross the snowy plains of Russia. Though, there exist few records that indicate whether the Aerosled suppressed preliminary testing. Historians believe the war ended before the inadequacies of the vehicle could be improved to a point where it was functional.

Though no original models exist of the Aerosled, a fully functional replica was constructed by Tatra in 2008. The replica reveals the unique inner working of the vehicle.

The Aerosled uses a unique combination of a special rotating drum and a propeller to give it its power. The rotating drum on the back accelerates the vehicle up to a certain speed before the propeller takes over. It also serves to provide extra traction and power when the vehicle climbs inclined surfaces.

The braking system is similarly unique. Activating the brakes causes the front skis to skew inward into a snowplow position. At the same time, pins at the back of the skis deploy to grip the ground and slow the vehicle even more. If the driver needs more braking power, the drum can also be used by lowering it and dragging it through the snow or ice.

The concept of attaching tracked systems to motorbikes is relatively simple. A single track replaces the rear power wheel and a single ski replaces the front. The drive chain attaches to a sprocket which in turn spins the studded track providing exceptional grip in snowy conditions. It is way less stable than a traditional snowmobile, though it does look incredibly fun for experienced riders. 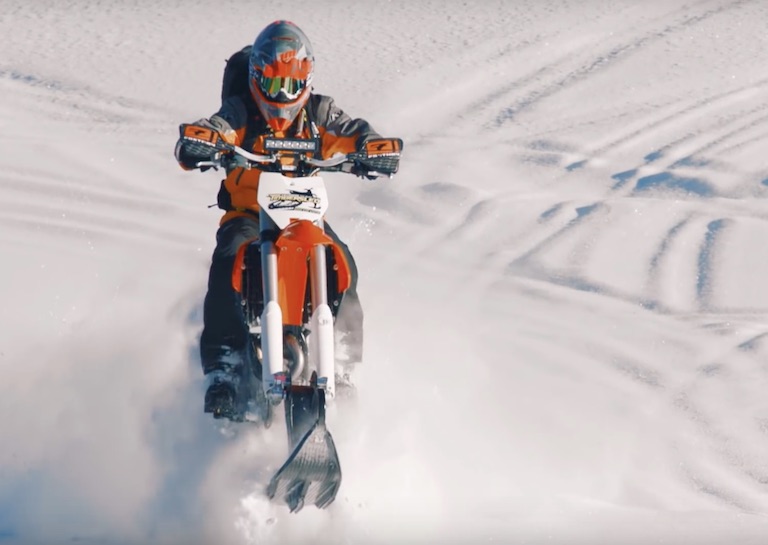 Almost any dirt bike can be transformed into a snow motorbike with an installation kit. It is said to be rather easy to install and allows riders to use their bikes all year round!

The Winston Ice Vehicle is an incredible prop-driven vehicle which was used to help transport researchers across 4000km across the Antarctic. While the vehicle only has the capacity for the pilot, its purpose was not to transport people, it is instead intended to lead the expedition and find a safe route of passage for the 10 supporting researchers and the other mobile research laboratory.

The vehicle weighs in at an incredibly light 700 kg and has a top speed of 135 km/h. Its lightweight design also makes it easy to be manhauled if its propeller cannot provide the power to get across difficult sastrugi terrain.

Perhaps the most fun and rigorous on this list is the Sherp ATV. The vehicle's absurdly large wheels allow it to traverse over obstacles 70 cm high.

Though it is only 3 meters long and 2.5 meters wide, the Sherp has an incredible dry-weight of 1300 kg. The vehicle also has a surprisingly low horsepower of just 44.3 hp, yet it is still capable of carrying a load of 1000 kg.

Adding to its ability to traverse difficult terrain- including through water- are its insanely huge wheels. The 4x4 drive system and large treads and incredibly huge 800 L volume tires allow the vehicle to power through the water. The lower portion of the cabin is sealed to provide extra buoyancy. The result is an incredibly fun off-road vehicle.

Concluding the list is the Eco-friendly Zeisel. Because each Zeisel is built to order, there is no standard model. Though they do break up into multiple basic models including the street, the sport, and the Aebi EC170- though we are unsure of what the latter version entails (other than a ton of added features).

The sport and street vehicle is powered by an electric motor which provides 500nm of torque while the Aebi EC170 model maintains about 1000nm. The vehicles also have a maximum speed of about 30km/h. The models have the ability to tow an impressive weight of 300 kg unbraked up to a maximum of 500 kg braked.

Since the vehicle is powered by electricity, they produce nearly no noise and no emissions. The charging time varies between 2.5- 4 hours- depending on the charger. On one charge, the vehicle can be driven for an impressive 4 hours.


SEE ALSO: The 5 Most Bizarre Aircraft in the World

Comets: Everything you need to know about 'dirty snowballs' of space