We look at 5 medical advancements that help to prevent, reverse, or even cure blindness.

As long as there have been old folks walking the earth, they have struggled to one degree or another with one of the most persistent and debilitating ailments that afflict the aged: losing their eyesight.

While not limited to the elderly, this disorder of the eyes is something that almost everyone must eventually deal with to one degree or the other as we get older.

Medical innovations have made great strides, however, to reverse or even cure several common reasons for eyesight degeneration and these advances are certainly the most promising in the race to cure blindness.

One of the most common problems that affect people as they get older is that certain parts of a well-functioning organ begin to wear out, and the eye is no different.

For centuries, the solution to this problem has been eyeglasses and other corrective lenses that do what the cornea no longer can, but recent advancements offer a surgical solution.

Using a laser to make a small incision in the eye, the corneal inlay, an implant the size of a pencil eraser, is inserted into the eye to help focus the light coming into the eye, fixing issues with near-sight vision loss.

Glaucoma is one of the most common diseases that can result in blindness. Medications have long been available for the disease but due to side effects and basic human nature, patients can have a hard time sticking to the dosing schedule provided by their doctors.

New contact lenses though can make the delivery of necessary medication simple and effective. By binding timolol maleate—a common medication for managing Glaucoma—to nano-diamonds embedded in the contact lenses, the medication can be administered automatically.

As the eye’s natural tears interact with the nano-diamonds, the timolol is released over time, managing the disease.

Reducing the incidence of side-effects that can turn patients off from using timolol eye drops will prevent the long-term damage. As glaucoma can cause damage to the optic nerve and lead to the progressive loss of eyesight.

A recent study offers new hope for those diagnosed with the untreatable form of the disease. It found that the rogue molecule that causes dry macular degeneration, known as Alu RNA, shares a common need for the enzyme reverse transcriptase as HIV.

Researchers found that anti-HIV drugs that exploit this need can be harnessed to treat dry macular degeneration, giving hope to many who previously had no option but to await the inevitable loss of their sight.

Gene Therapy for Inherited Diseases of the Eye

Often, when dealing with sensitive organs like the eye, genetic mutations can produce debilitating diseases and disorders.

One such condition, retinal dystrophy related to a genetic mutation in the gene RPE65, is a rare eye disease that causes severe visual degeneration.

The disease begins in people as early as infancy and sufferers progressively lose their peripheral vision and then their central vision, leading to total blindness. 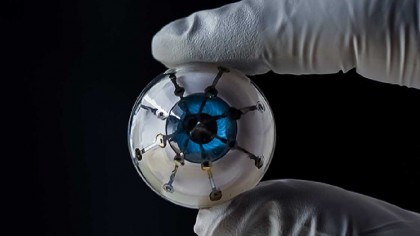 Last year, however, the US Food and Drug Administration approved a gene therapy to treat this condition. Gene therapies work by using a virus that carries an unmutated form of the gene and is injected into the affected area.

The virus then does what viruses do, target cells and inject their DNA into the cell, overriding the cells genetic code.

Normally, this has a devastating effect as the cell will now begin replicating the virus rather than function normally.

However, in the case of gene therapy, this is precisely what you’d want since not only is the cell’s mutated genetic code fixed and replaced with healthy DNA, it will also spread the corrected DNA throughout the eye, repairing the mutation and preventing the disease from taking someone’s eyesight.

Depending on the success of the treatments in the coming years, we can expect to see many more instances of gene therapy being utilized to fix any number of inherited eye disorders.

Easily one of the most futuristic cures for vision loss is the bionic eye. Approved in 2013 by the US FDA, the prosthetic eye is a revolutionary new device that can restore limited sight to those who have total blindness.

In the case of the Argus® II Retinal Prosthesis System, a product of the Sylmar, CA-based Second Sight Medical Products, Inc., patients have one of their eyes replaced by the Argus® II.

They then wear glasses with a built-in camera that captures light and converts them to electrical signals in the form of pulses.

These are then wirelessly transmitted to the Argus II, which then taps out the corresponding signals onto the remaining cells of the retina.

Thanks to brain plasticity, these signals are processed by the brain as patterns of light, which it will then make sense of, allowing people to see shapes and forms, movement, and the outlines of family and friends.

In clinical trials of the Argus® II, participants who received the prosthetic performed better than the control in terms of day to day functioning.

Many could find the lights and windows in their house, see the lines of a crosswalk and stay within them, and avoid obstacles as they walked. Some were able to sort their laundry and half were even able to read letters that were at least nine inches tall.

As the technology improves, the gains to sight from such prosthetics—and even some of the advancements over normal sight—are sure to multiply.