Gravity is one of the fundamental forces of nature, but some believe it can actually be an illusion.

Gravity is one of the most studied phenomena in science. It is also a fundamental force of the universe, but what is it?

We experience it every single day of our lives, and in fact, without gravity, your body would soon undergo some interesting changes.

What is gravity theory?

According to NASA, gravity is: -

"the force by which a planet or other body draws objects toward its center. The force of gravity keeps all of the planets in orbit around the sun."

Put simply, anything that has a mass of any kind will exert or be under the influence of gravity. Objects with larger mass have more gravity and the force gets weaker the further you are from a center of mass.

It is because of gravity that things fall to the ground and is the very reason we have weight. If you were to travel to a planet with less mass than Earth you would actually weigh less, and vice versa for planets with larger mass.

Whilst the above definition is simple and intuitive, gravity might not be so simple. It has been one of the most studied phenomena in physics and the more we learn about it, the less it seems to make sense.

In fact, it is one of the least understood of all the fundamental forces of nature. Whilst on the grander scale (like the solar system), gravity seems to work just fine, at the quantum level it appears to break down.

It seems that gravity might actually be an illusion...

Whilst this might seem a little counterintuitive, gravity might not actually be a force at all. According to Albert Einstein, gravity is actually more of a consequence of something else rather than a force in its own right.

Einstein's theories proposed that space-time is actually bent by massive objects, like planets and suns. This phenomenon distorts the path of objects through space-time creating the effect that we see and feel as gravity.

2. Your favorite fridge magnet is stronger than Earth's gravity

It's amazing to think that that tiny magnet is able to defy the gravity of an entire planet.

Gravity is the weakest of the so-called fundamental forces in physics. It also pales in comparison to the electromagnetic force that holds the magnet onto the fridge.

This makes complete sense when you think about it.

Other forces, like the strong nuclear force in the nuclei of the atoms of the magnet, are also vastly superior in strength to Earth's gravity.

It is also unable to defeat the weak nuclear force of atoms that are responsible for radioactive decay. 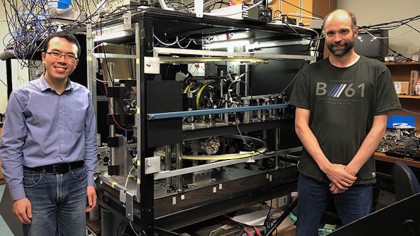 As previously mentioned, Einstein's theories describe how massive objects distort space-time. As these objects move that should, according to Einstein, create ripples in the very fabric of space.

You can liken this to a water boatman skating across the surface of a pond.

Whilst this was purely theoretical for many decades, we have actually been able to detect these waves in recent years. Notably back in 2007, the Nobel Prize for Physics was awarded to 3 scientists for just that.

They were able to observe a collision between two black holes about 1.8 Billion light years away. These black holes are massive indeed with one being 31 times the mass of our sun and the other 25 times.

The collision converted the mass of about 3 suns into gravitational-wave energy in the fraction of a second!

The Earth is not a perfect sphere. It also has lots of lumps and bumps in the form of mountains, and deep gorges.

The composition of the Earth is also not uniform around the world. Different rock types, concentrations of minerals, and geography all collude to create pockets of varying average density in all over the place.

This directly affects gravity at different places on the Earth's surface.

This can be measured with relative ease, and organizations like NASA have actually mapped this effect from space. Using a pair of satellites that work in tandem, they were able to measure the relative pull of the Earth's gravity as they travel around the planet.

Called the GRACE satellites, NASA was able to produce an interesting "bumpy" model of Earth's gravity.

5. Quantum mechanics and gravity are at odds

Quantum mechanics helps us explain how atoms, molecules, and other fundamental particles interact. Einstein's theory of general relativity, on the other hand, helps explain how things work on the mega-scale.

But the problem is these two realms of physics don't seem to fit together. Whilst a lot of work has been carried out to fix this issue, it is still one of the biggest challenges of modern physics.

It is likely that this is because, as we have previously mentioned, gravity isn't actually a force per se.