5 Most Challenging Tunnel Constructions Around the World

Tunnels are considered to be one of the most challenging construction projects in the world. Requiring bespoke pieces of machinery to excavate difficult rock strata, tunneling projects are often expensive and dangerous. Engineers are usually faced with plenty of geotechnical challenges that prompts for intelligent solutions and practical executions. These 5 tunnels demonstrate ingenuity and clever engineering, which resulted in the construction of the world's longest and deepest tunnels. From Norway to Japan, let's explore these subterranean infrastructure giants and discover some of the most difficult engineering challenges they faced.

The world's longest road tunnel, the Lærdal tunnel in Norway, is 24.51 km long which connects Lærdal and Aurland, north-east of Bergen. Lærdal tunnel carries two lanes of European Route E16 and serves as the final link on the latest main highway that connects Oslo and Bergen. The tunnel saves people from traveling through difficult mountain crossings during winter and the hassle of ferry connections. 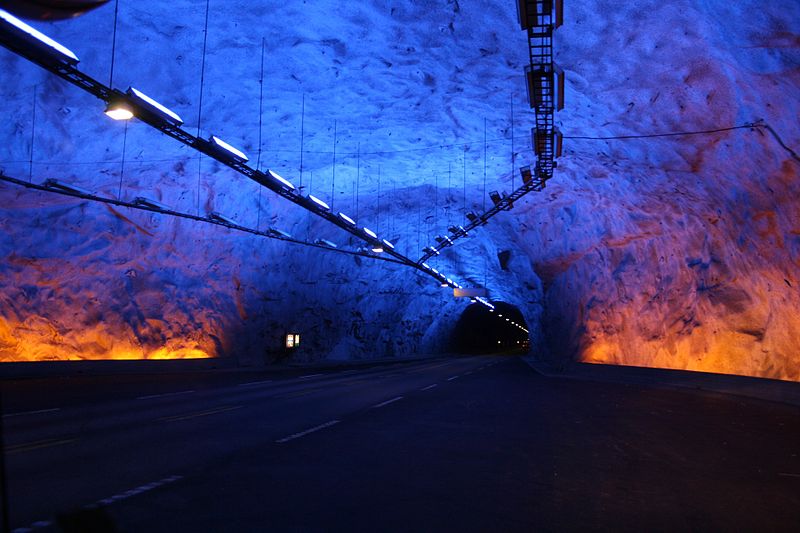 Apart from being the world's longest road tunnel, it also features the first air treatment plant consisting of two large fans and an electrostatic and carbon filter. The air treatment plant gets rid of dust and nitrogen dioxide from the large infrastructure. One of the amazing features of the tunnel is that it's equipped with special lightings to provide the perception of driving into daylight as the whole tunnel journey takes an average of 20 minutes. This is to prevent drivers from falling asleep.

Running deep within the mountain, 1,400 m of rock exerts immense pressure above the tunnel. Additional horizontal stresses from the Earth's crust can result in the collapse of the tunnel's ceiling and walls after rock blasting sessions. This phenomenon is called rock burst and the Lærdal tunnel project faced this problem often during its construction. So, to overcome this, hydraulic scalar fitted to an excavator to clear up blasted rocks after explosions. The roof and walls are then free to be reinforced with galvanized steel bolts and fiber-reinforced shotcrete. Stresses are then transferred deeper into the rock using the steel bolts and the shotcrete binds the tunnel surfaces together between the bolts.

Stretching at 57 km across the Swiss Alps, the Gotthard Base tunnel is the longest rail tunnel in the world. The railway tunnel complements Switzerland's existing mountain rail routes as it's designed as a level transalpine railway connection with only a few gradients. Gotthard Base tunnel allow trains to travel up to a top speed of 250 km/h and also permit heavy goods trains to pass through the transalpine route. With a maximum depth of 2,450 m, the tunnel is also the deepest of its kind in the whole world.

28.2 million tons of rock and earth materials were excavated from the two-bore tunnel by conventional blasting and using tunnel boring machines. The alpine geographic profile has a range of various different rock strata, from hard granite to crumbly sedimentary rock.

One of the major challenges engineers experienced with the construction of the tunnel was the water saturation level of the alpine rock. A particular section called the Piora syncline was rich in dolomite and geologists feared that they may encounter an explosion of rock filled with water when subjected to high pressure. After conducting geotechnical tests, evidence revealed that lower down where the tunnel was going through, the rock profile was considerably dry. This called for the tunnel to be watertight and engineers decided to take an "umbrella" approach. They covered the vault of the tunnel with a layer of concrete and waterproof mantle, which permits the water to flow down the internal side of the walls. Pipes were then laid out under the railway tracks to channel the flowing water out of the tunnel. 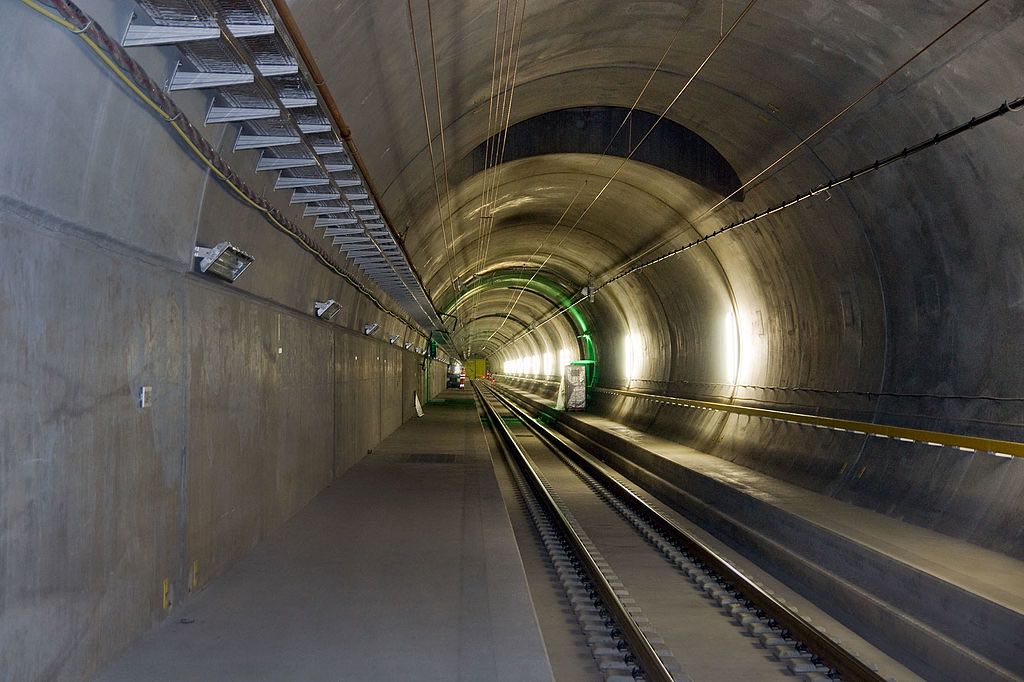 When you think of trans-European travel, the Euro tunnel or Channel tunnel will be the first to spring up to mind. This ultimate European tunnel connects the southern coast of the United Kingdom to the northern coast of France at a distance of 50.45 km.

The amazing fact about this tunnel was that it was bored at both the English side and the French side simultaneously. Giant boring machines were customized to cut through layers of rock and soil, with a combination of extremely high-pressure water jets and rotating discs. The tunnel comprises of three bores: two railway bores at 7.6 m diameter and 50 km in length and a 4.8 m diameter service bore tunnel in between.

The main challenge for this infrastructure is to address the problem of tunnel fires. The engineers designed the tunnel with a service shaft in between the two, big rail track shafts. It proved to be effective when 32 people were trapped in a fire that burst out from a train coming from France but was able to escape the burning tunnel through the service shaft.

The Seikan tunnel is Asia's longest underwater rail tunnel with a total length of 53.85 km and approximately 23.3 km is submerged under the seabed. Construction of the Seikan tunnel experienced many technical challenges as the infrastructure sits through an earthquake-prone zone. The engineers couldn't use tunnel boring machines (TBM) as the rock and soil underneath the Tsugaru Strait was arbitrarily unpredictable. So, the tunnel was painstakingly carved out by drilling and blasting. During its construction, a soft patch of rock was hit and 80 tons of water per minute gushed into the tunnel, which took more than two months to normalize the condition. Fortunately, no lives were lost in this incident. 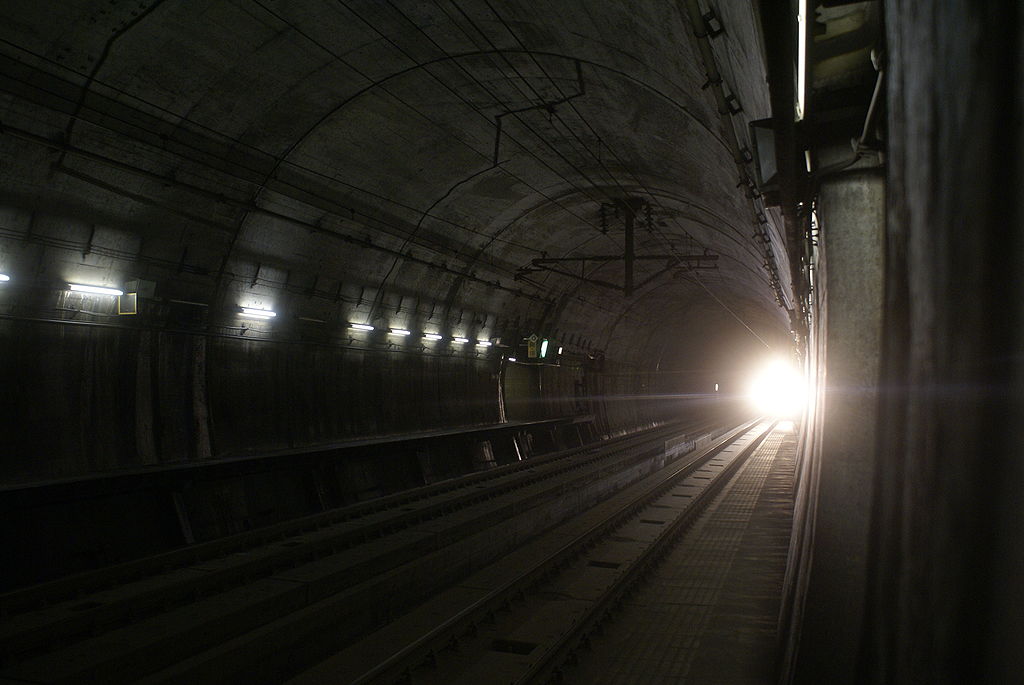 The Drogden tunnel is part of the 16km Øresund link between Copenhagen and Malmo. This project is considered to be one of the most ambitious construction projects in the world because of its complexity and specific construction conditions. The entire link consists of the 8km Øresund bridge, the 4km Peberholm artificial island and, of course, the 4km Drogden tunnel. Peberholm island is the man-made piece of land that supports the tail end of the bridge and connects it to the tunnel's entrance. 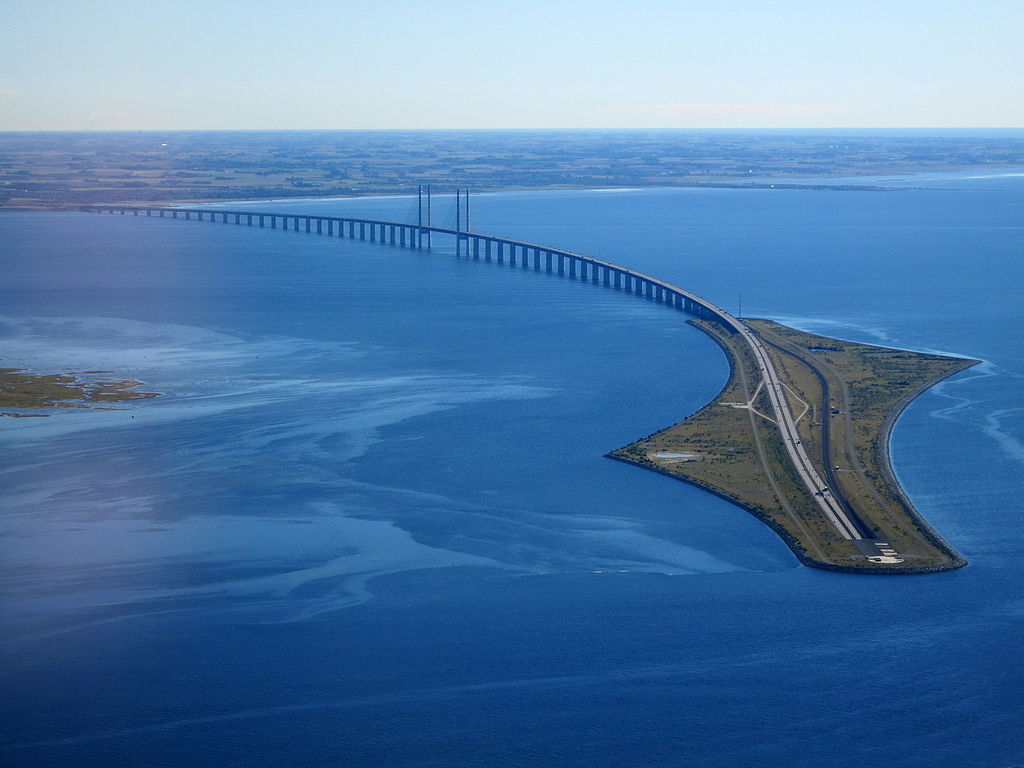 So, what makes the Drogden tunnel incredible? Well, just by looking at it, the bridge's road leads to the opening of the tunnel, which looks like a portal heading to a different dimension. The Drogden tunnel links the nearest populated part of Denmark to Sweden, which comprises a 3,510m underwater tube tunnel and 270m entry tunnels at both ends. This tube tunnel is composed of 20 segments of prefabricated reinforced concrete, each weighing 55,000 tons making it the heaviest tunnel in the world. The immense weight of the concrete segments meant that no machine was strong enough to lift them. The solution - each piece were plugged and turned into rafts and a basin system was built to bring water to the segments instead of the segments being brought to the water. This method allowed the segments to be transported through the channel and sank into the trenches dredged in the seabed.