There are not many events that are bigger than a TEDx stage. TEDx talks often times get millions of views online.

Let's think about that for a moment.

-There's a speech at the White House

-There's a speech maybe to a big audience of 5,000 people

If you've seen my other articles, you know that all I do on Interesting Engineering is provide the top speaking tips to help you up your communication game and become a more confident speaker.

Leonard Kim. Managing Partner of InfluenceTree, had the opportunity to speak at TEDxUCIrvine. So you can imagine, Leonard was probably as nervous as he could be. And he needed all the help he could get. So who did he turn to? Me, Ryan Foland. Expert communicator, professional speaker, and the person who you want to get on your side, to really teach you how to speak.

Now, Leonard. He's a great writer, but when it comes to speaking, I mean, he's okay.

And, that's me putting it nicely, right? I mean, when he first came to me for help, and we first started rehearsal, what he did was pull out this big long script and he started to read it. It was awkward and unnatural, super long, dry and boring.

I taught Leonard Kim how to give the best speech of his life, even though he has limited speaking experience. I did so by making him follow these 5 steps.

These are the 5 steps you need to take to deliver an amazing presentation, even if you’re nervous as hell.

Buy into the emotions of what you're talking about. 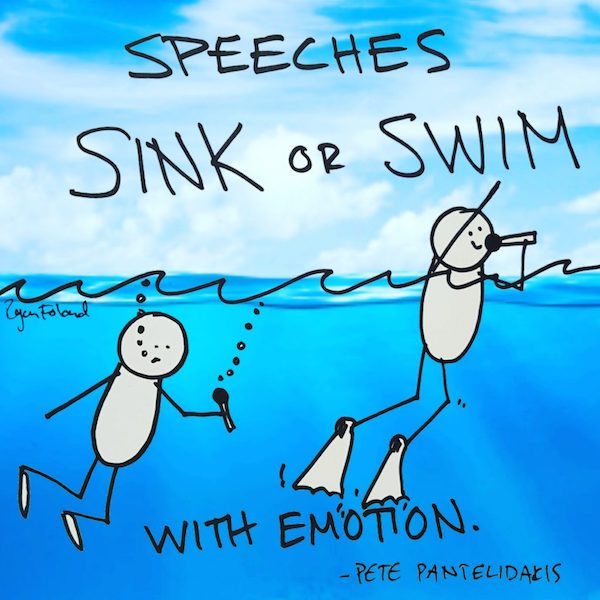 When Leonard was reading this script, he was just telling. Leonard was smiling at the sad moments and laughing over them. He didn’t seem to be taking it seriously. But, when you're making a serious talk like what he was, you can't be laughing and joking around. You have to really buy into and reel in those emotions. So I helped Leonard do that.

Instead of just reading your script off of your paper, try to recall what your feelings are at the time of the story or section that you're describing. Your emotions should match the situation.

If you are talking about sad memories, you would want to lower your pace, lower your tone, make a softer body language movement, and lower your voice a little. If you are sharing a part of your story that is supposed to be fun, uplifting and/or inspirational, pick up the pace, smile and bring energy to the words.

Break your talk into segments. 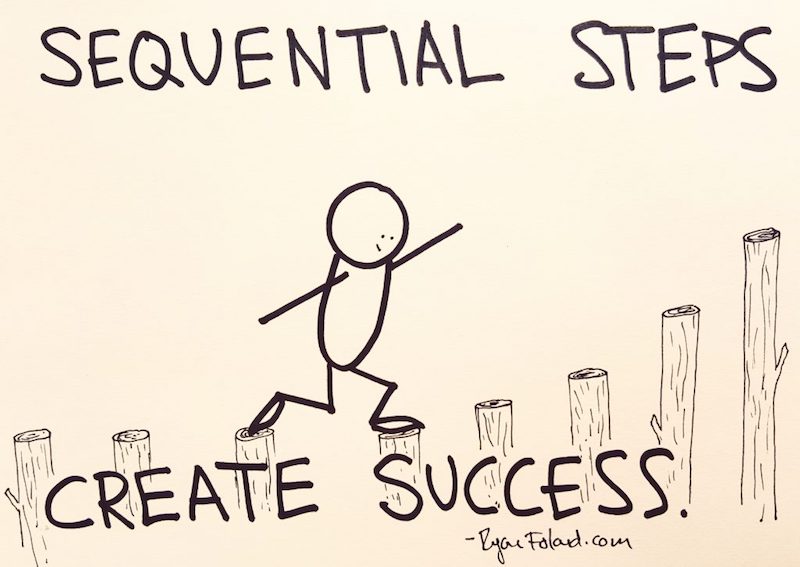 Think of the sections of your talk as sequential steps. One thing Leonard had a lot of difficulty doing the first time he tried giving his talk, was remembering all the key components in the right order. A TEDx Talk has to be 18 minutes or less, and if you are not an experienced speaker, this can seem like forever. It is intimidating to memorize every little piece of it, and Leonard seemed pretty stressed out. There are no scripts allowed on the TEDx stage, but how was Leonard going to memorize it all?

If he tried to remember the entire talk, from start to finish, it was going to be impossible for him. Also, if we decided to change elements, it would mess him up. So, what I did is I drew a few boxes on the whiteboard for him. Five boxes, to be exact. I broke down his story into five different pieces. Five different chunks of information that were smaller sections that he could more easily remember. This simple step made the long talk, a lot more digestible for him.

By making it more digestible, he was able to recall and remember things much quicker, and we were able to focus on each section at a time. Whatever the length of your talk or presentation, try to break it down into smaller elements to make it easier for you to work with. 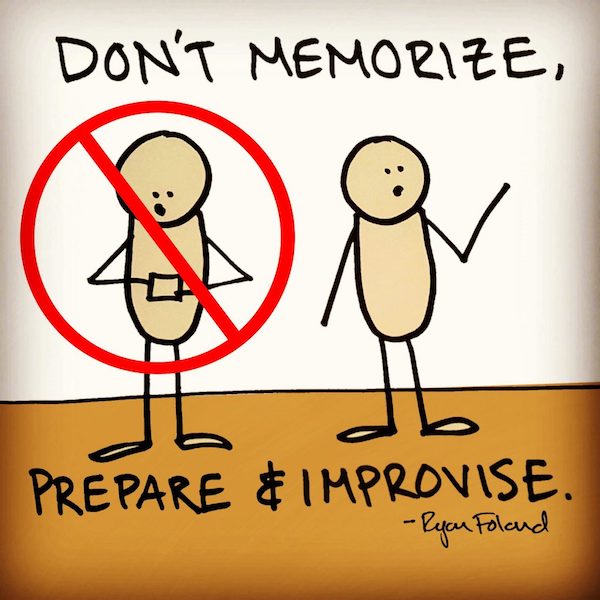 Many people think having to memorize speeches is as exciting as being chased by a bear. But you should not memorize your speeches. Instead, you should prepare and improvise. This is one piece of advice I give very often, and was very relevant for Leonard's talk. He was trying to memorize his whole talk, and it was very obvious.

During rehearsals, he would almost sound like a robot, rehearsing what he had memorized. When he forgot sections of it, he would stop, and lose his place. The downside to memorize a talk word for word is that it can work against you. If you forget one part, it might mess you up, and create a very awkward moment during your talk.

The best way to prepare for a talk is to not memorize but prepare and improvise. Each time you give your talk, it should be a little bit different. You should know the core elements, and explain things in a certain order, but it should be natural sounding, and not like you have memorized every word. For more insights on how to better prepare for a talk, see another article I wrote that outlines everything you need to develop an epic TEDx talk. 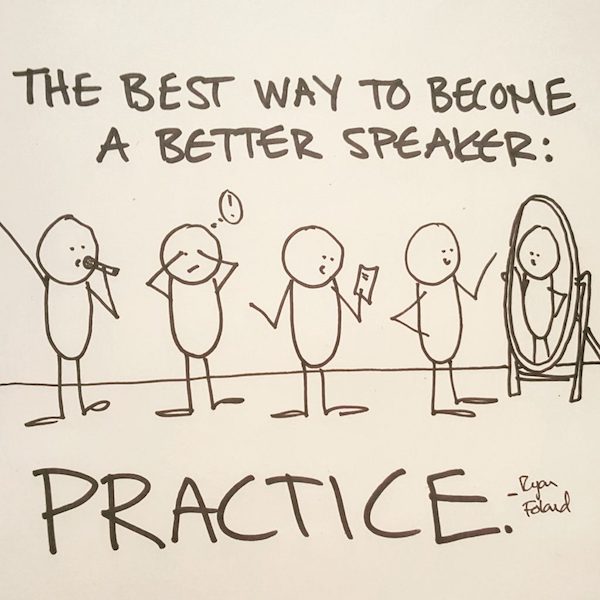 I told Leonard to practice every day. I would call him and ask if he had practiced that yet, and most of the times he said he hadn't. This is a pattern all too familiar with beginner speakers. If you are trying to prepare for a speech, the best thing you can do is practice. And the easiest thing to do is to not practice. So, I knew I had to keep Leonard accountable. I would send him a text message, or call him every single day to make sure and hold him accountable for practicing.

The acceleration that I saw in improvement came when Leonard started to practice consistently. I would make him call random people, and give the talk to them. I would have him videotape himself and then watch it. I would even tell him to practice his talk in front of stuffed animals.

If you're just rehearsing the same speech in the same way at the same location every time, it will become monotonous. You have to change up how you practice. Practice in different locations, to different people, and at different times of the day.

-Break it down into three segments:

-Practice in front of friends

-Practice in front of different sized audiences and groups

His talk ended up being funnier than he thought, but he wasn't thrown off guard by the audience's laughter, because giving his talk was so natural, since he had practiced, practiced and practiced.

Forget everything you've learned, and just go with it. 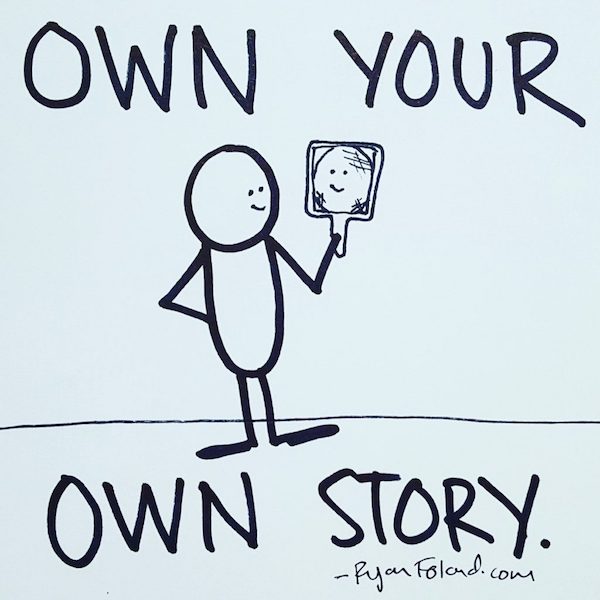 As you can imagine, 24 hours before Leonard's talk, he was pretty nervous. He probably was scared. And knowing him, I’m sure he wanted to run away, because that's the type of guy that Leonard is.

I could tell Leonard was nervous. I even saw some social media posts, where he was talking about how nervous he was. But, the time had come for his speech, and he had put in the work that he needed to put in. It was showtime. When it's getting down to go time, and you’re a day before the event, that's when you should relax and enjoy all the hard work that you've put in.

Forget everything that you've been trying to do, and just be natural.

You're not memorizing, so you're not repeating a memorized speech. You know what your emotions are at different parts of your talk. You've practiced this in front of so many different people, there's a flow to it, and you know it. You can feel it. It has become natural. Each time you practice, the talk is a little bit different, but the core message is still the same. That's the magic of being a good speaker, is that every time you give a talk, it should be a little different, because it should be natural.

At the very end, forget everything you've learned, and just go up there and enjoy yourself. Because what I told him was, regardless of how the speech goes, if you have a good time, the audience will have a good time. And that is because the audience is a reflection of you. You have hundreds of eyeballs looking at you, and they are picking up your every move. They hear not only the words you say, but they see what your body is saying. If they can sense that you're nervous, they will get nervous for you. If they sense that you're actually enjoying yourself, they will be able to relax, listen to your talk, and enjoy themselves.

And that's exactly what happened with Leonard’s talk.

This is how you can be not the best speaker, but give a stellar presentation that is emotional, and tells your story. At the end of the day, if you follow the above 5 steps, you will feel confident when it is time for your TEDx talk, and you step onto the famous red rug.

Want to know something really cool? Imagine how excited Leonard was when he was informed that his talk was named #2 on Inc Magazine's top 1o list of TED Talks to overcome your fear!

After you watch his talk, hopefully, you will be inspired. If you are an engineer and don’t think you have what it takes to give a TED talk, think again. Learn from Leonard’s experience. It just goes to show that with the right coaching, even a bad speaker can be good.

If you are inspired to give a TED talk of your own, I have mapped out the steps you need to take to apply, and spread your idea worth sharing.

If you are interested in private coaching for an upcoming speech, presentation or even TED talk, email me at ryan@ryanfoland.com and we can discuss!