5 Top Renewable Energy Research Centers in Europe and the USA

Five top renewable energy research centers in Europe and the US.

Renewable energy research and innovation is becoming increasingly important as the world seeks to counter climate change and decarbonize its energy system. At the core of this research, activity are a number of highly renowned and influential research centres that are leading the way in clean energy technology innovation and development. Here are five of the most well-known research centres in Europe and the US.

CREST has been researching alternatives to fossil fuels for over 20 years, collaborating with industry and international academic networks in order to develop new technologies and support rapid growth within the global clean energy sector. It is the largest sustainable energy research centre in the UK and was the first in the country to offer a postgraduate degree in renewable energy systems technologies (REST). It also maintains a distance learning scheme which helps to widen its global reach and influence.

The centre conducts research in a number of key areas, including wind power, solar PV, grid connection and integration and energy storage. It is a member of the European Renewable Energy Centres Agency, which consists of over 40 top renewable energy research centres.

In 2014, researchers from CREST developed a multilayer anti-reflection coating for glass surfaces that can help reduce the sun’s reflection from solar PV panels, thereby improving their efficiency. This consists of four layers of zirconium oxide and silicon dioxide and is aimed particularly at improving the efficiency of thin film Cadmium Telluride solar cell devices, although the coatings can also be applied to other thin film technologies such as CIGS (copper indium gallium selenide) and amorphous silicon.

The UK Energy Research Centre (UKERC) is funded by The Research Councils UK Energy Programme and carries out leading research into future sustainable energy systems. It also acts as a focal point for UK energy research and as a gateway between the UK and other international energy research centres overseas. Its research informs UK policy development and the strategies of a wide number of organisations in the public, private and third sectors.

UKERC’s research currently focuses on energy system change, including a core research programme and a flexible research fund. This involves research across a broad range of topics including the implications of possible future developments within UK energy (energy futures), energy sources and vectors (such as electricity, heat and liquid fuels), energy modelling, interactions between local, national and European energy systems at varying scales, interactions between the energy sector, UK energy policy and the wider society, decision making at various levels from households to government and multinational businesses and technology and policy assessment.

UKERC publishes a regular series of papers and reports on a wide variety of topics. For example, a recent paper authored by Mariana Mazzucato, Gregor Semeniuk and Jim Watson, released on December 8th, examined the various policy imperatives required as a basis for a truly green energy revolution, focusing on the discussions at COP21 in Paris and President Obama’s announced intention to make the US a world leader in tackling climate change.

The centre also allocates funding for numerous projects, most recently £1.3 million for four research projects looking at incumbent energy structures in heating and appliances; governance of low-carbon innovation for domestic energy retrofits, equity and justice in energy markets and policy pathways to justice in energy efficiency.

As with other research centres, UKERC holds a number of key events, such as Energy systems challenges in a world in transition, a flagship conference to be held in Oxford in March 2016.

One of the centre’s key programmes is BLEEP – Blade Leading Edge Erosion Programme, which aims to coordinate industry-wide initiatives in reducing the adverse impact of erosion on the leading edges of turbine blades, thereby improving the operational performance of offshore wind turbines. This will be a £1 million, an 18-month programme consisting of six work packages assessing impacts on turbine blade aerodynamic performance and structural integrity in order to reduce operations and maintenance and maximising turbine availability and reliability. This, in turn, should help to reduce the cost of electricity generated by offshore wind turbines.

The US National Renewable Energy Laboratory (NREL) is probably the world’s best known renewable energy research centre, operated by the US Department of Energy (DOE). Its main campus is located in Golden, Colorado, but it also has an office in Washington D.C. It has a number of separate departments, specifically the National Bioenergy Centre which is aiming to advance technology for producing renewable transport fuels from biomass; the National Centre for Photovoltaics (NCPV) which focuses on technological innovations driving US growth in PV manufacturing, and the National Wind Technology Centre (NWTC) which is America’s premier wind energy technology research facility, looking at both onshore and offshore wind in order to increase system reliability and reduce costs. NWTC is located just south of Boulder, Colorado and incorporates a number of test sites which are geared towards the development of advanced wind energy technologies. 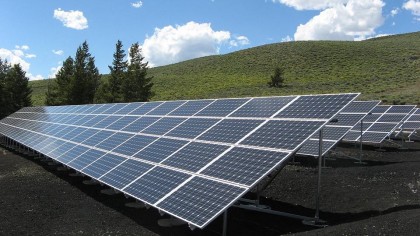 NREL has 13 major research programs including transportation, bioenergy, buildings, electricity, defence energy programs, geothermal, hydrogen and fuel cells, solar and marine energy. It also has a number of collaborative research facilities. It receives over £300 million in funding per year and employs 1,500 people with around 800 visiting researchers, interns and contractors.

The Fraunhofer Institute is a world-known renewable research organisation located in Germany which has around 67 different research institutes across the country.

One of these is the Fraunhofer Institute for Solar Energy Systems (Fraunhofer ISE) which conducts research on renewable energy technology in the areas of solar thermal energy, solar building, solar cells, electrical power supplies, chemical energy conversion, energy storage and the rational use of energy. Its work ranges from fundamental scientific research to solar energy applications, including technology development and the construction of prototypes and demonstration systems. ISE employs 1300 people including specialists from a range of disciplines working on twelve distinct business areas. These include materials research, semiconductors, optics and photonics, electrical engineering and controls, information and communications, modelling and simulation and measuring, testing and monitoring.

Another Fraunhofer Institute is Fraunhofer Institute for Wind Energy and Energy System Technology (Fraunhofer IWES) which was founded in 2009 and employs more than 500 people with an operating budget of 32.1 million Euros in 2014. IWES operates a series of extensive testing and experimental facilities, laboratories, and state-of-the-art equipment. It is well-known for international collaborative work in development and project cooperation.