Danny Thompson has fulfilled his dream by setting the new land speed record for a car using an internal combustion engine.

A new world land speed record of 722.1 km/h has been set by a 50-year-old car, the Challenger 2. The historic car made its first attempt at the record back in 1968 by Mickey Thompson. 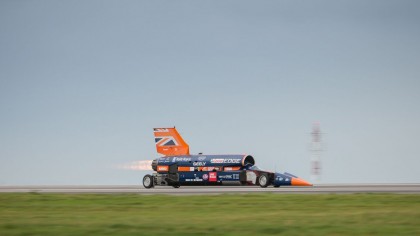 Now Thompson’s son, Danny has finally set the record in the same, although refurbished car. The record was set at the famous Bonneville Salt Flats, an area loved by speed freaks for its flat open surface.

In recent years many new records have been set using turbojet and fanjet engines, but this latest record is for the land speed record achieved with a car using an internal combustion engine. It was last broken back in 2012.

69-year old Danny Thompson has spent the last few years carefully restoring the Challenger 2, maintaining a lot of the original exterior while upgrading the interior and motor to match modern racing standards.

Finally, the motor enthusiast's dedication has paid off and the new record of 722.1 km/h or 448.757 mph for a piston-powered car is officially his.

The record is set by calculating an average of the car's outward run 718.7 km/h or 446.605 mph and return run 725.7 km/h or 450.909 mph over two days. "That has been the goal since day one of the project, and it wouldn't have been possible without the extraordinary efforts of my crew," said Danny Thompson in a statement.

"The men and women who volunteered to join me on this crazy adventure are the reason for today's success. I can never thank them enough." When Danny’s dad first tried to set the record fifty years ago, his hard work was hindered by huge rains that washed away the track's smooth surface.

The record for Danny is bittersweet, both his father and mother were tragically murdered in 1988. It wasn’t for another 15 years after their deaths that Danny could bear to face the Challenger 2 again.

Thompson junior says he feels like he has finally been able to fulfill his father's dream by setting the record this week.

For speed freaks who want to feel what it's like to be inside the drag car as it tears along the salt plain, the cockpit video from the record attempt is a must-see.

Thompson thanks his friends, family, and supporters profusely in his post about the record-setting day describing it as a fantastic day.

Thompson joins Rocky Robinson who is the current holder of the motorcycle land-speed record. Similarly, the record is calculated from the motorcycle's average speed over a fixed length. The current motorbike record was set in 2010 and is the first to have broken the 600 km/h (373 mph) mark.

Scientists Have Set the World's First Record for DNA Sequencing