A child’s milk tooth, dating back to at least 560,000 years, was discovered in France. The tooth belongs to a sub-species of humans called Homo heidelbergensis.

In an exciting discovery by Spanish and French archaeologists recently, a one-of-a-kind child’s milk tooth, dating back to at least 560,000 years was discovered in a French cave on the Pyrenees Mountains that border Spain. This fossil was found housed in the Arago Cave in France, which has a prehistoric value in itself at Tautavel.

This species resembles the modern day humans as well as the ancestors of our Homo erectus. While the examination of the tooth is yet to be done, researchers have analyzed the soil and based on the estimation, the tooth dates back to at least 560,000 years, if not more.

This makes it even older (100,000 years older to be precise) than the Tautavel Man skull which was discovered in 1971 on the same site.

"The tooth likely belonged to a child aged five or six, who still had their milk teeth but had used them a fair amount."

Tony Chevalier, a paleoanthropologist at the research center in Tautavel and the University of Perpignan explained, "The tooth likely belonged to a child aged five or six, who still had their milk teeth but had used them a fair amount." He also mentioned that this milk tooth was very likely to "teach us lots of things about man's behavior" at the time.

“It's one of the oldest human remains discovered in France, and the oldest child,” said Gaël Becam, a research professor at the European Center for Prehistoric Research of Tautavel. He said that the tooth had a root which means that the child would have died prematurely, as it did not grow old enough for the tooth to break off.

This human remain is the 151st that has been discovered in these caves and the isolated tooth is the 80th discovery, according to the official French source of the news. None of the individuals discovered at Tautavel are among our ancestors.

The most recent human remains of the site date back to 450,000 years ago. At that time, Homo sapiens did not exist any more than Neanderthal (a subspecies that went extinct 40,000 years ago). 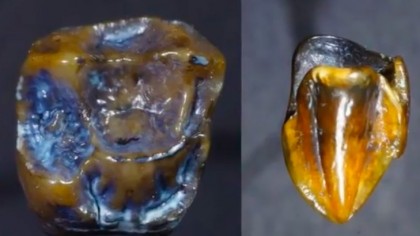 All the human remains of Tautavel are attributed to Homo heidelbergensis, as revealed by researchers. This early human species lived in Europe and Asia 700,000 to 200,000 years ago and was the first to build shelters out of wood and rock.

While the tooth is yet to be analyzed, it undoubtedly gives us a deeper insight into the way of life of these distant cousins.

Researchers are fascinated by this discovery and call it as “exceptional” as the human remains that date back to this period is very rare. It has always been a source of wonderment for researchers and scientists how the people back in those days lived and survived.

These sites have been the source of a number of discoveries amounting to almost 150 ancient human fossils that have significantly helped researchers in getting some much-needed insight into the way of living of the people back then.

However, what they are still yet to ascertain is whether these caves were simply a temporary shelter after tiring hunting trips for our ancestors or whether they turned it into their permanent homes to live with their families.

This milk tooth could probably go a long way in solving this mystery, although that is yet to be seen.