The collapse, which would have turned Earth into a barren, Martian-like landscape, was only prevented by the timely solidification of Earth’s central core.

New research from the University of Rochester in New York reveals that life on Earth caught a lucky break 565 million years ago when the collapse of the Earth’s magnetic field was prevented by the timely solidification of the Earth’s inner core.

The Slow Collapse of the Geodynamo

A new study published in the journal Nature Geoscience provides strong evidence that the Earth was close to suffering a catastrophic collapse of its magnetic field about 565 million years ago.

Examining crystals found near Quebec, Canada that date to about half a billion years ago, lead researcher Richard Bono found strong evidence that the Earth’s magnetic field was about 10 times weaker than it is today and getting weaker.

Lattices in the crystals—which are sensitive to the changes in the Earth’s magnetism—showed that the it went through a period of weakness that lasted about 75,000 years, with its weakest point coming around 565 million years ago.

This was much longer than it would have been had the weakness been the result of an imminent change in direction or pole reversal, which have occurred regularly in the past. The only explanation would have been the imminent collapse of the geodynamo, the convection currents of the liquid outer core of the Earth responsible for generating the magnetic field.

“Liquid iron in the outer core convects, carrying with it magnetic field lines that twist, continuously regenerating the field. Without the convection there would be no core magnetic field,” said study co-author John Tarduno.

The Earth’s Magnetic Field Isn’t Just About Your Compass

The role this shield around the Earth plays goes largely unappreciated by the public at large, but it is a silent guardian over all life on Earth.

Without it, the sun’s solar winds, charged particles that are blown out by the sun at millions of miles an hour, would hit our atmosphere without interference. Over time, this would have a similar effect on the atmosphere as the weathering effect of sand in the desert has on desert monuments. Over time, paint is stripped away, features flatten out, and—given enough time—, the entire statue would be worn away to nothing.

And we don’t have to speculate about what it would look like, all we have to do is look at the barren landscape of Mars to understand what Earth could have looked like without a strong magnetic field.

Saved in the Iron-Nickel of Time

At the moment when the Earth’s magnetic field was weakest, life on Earth caught a lucky break. The iron-nickel inner core of the planet began to solidify.

Thought to have originally been entirely liquid like the outer core, eventually, the pressure of so much material overhead would slowly force the liquid into an effectively solid state while the surface temperature of this mass would reach a little more than 5,400 degrees Celsius. 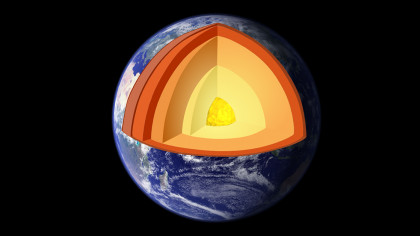 How Much Longer Until the Core of the Earth Runs Out of Fuel?

As time went on, the inner core would grow as the liquid iron-nickel alloy of the outer core would solidify under pressure to add its mass to the inner core. This process of solidification, or “nucleation,” provided the essential boost in energy that the fading geodynamo needed.

“As Earth evolved,” Tarduno said, “the energy to drive convection gradually decreased, until a critical point 565 million years ago marked by the extremely low magnetic field intensity. The growth on the inner core provided a new source to drive convection and the geodynamo."

Thanks to the restoration of Earth's magnetic field, life was able to continue and thrive, with the Cambrian explosion, the massive growth in biodiversity responsible for animal life, occurring not long after things started turning around 565 million years ago.