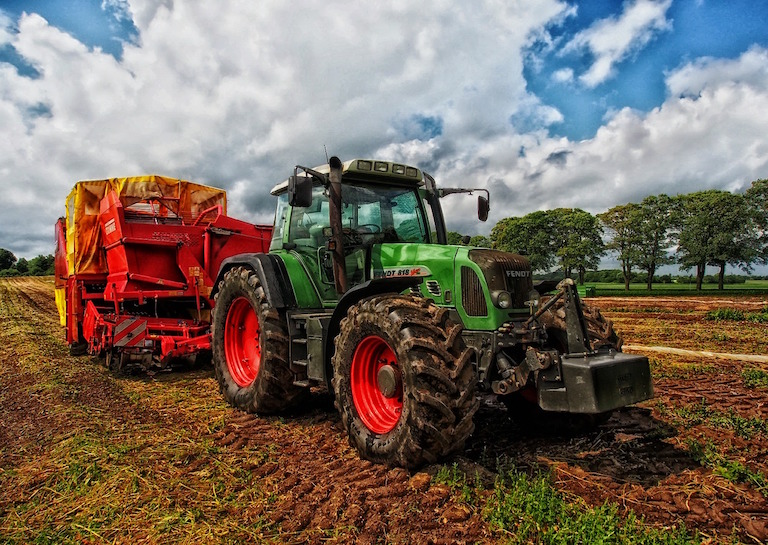 Farming is perhaps one of the world's oldest and most necessary trades, and up until recently, it has continued on with the same tools. Modern engineering along with tractors and new machinery has shifted the farming industry to one of efficiency and mass production. Farming is no longer a small scale production, but rather one that takes place with massive machines over thousands of hectares. This efficiency boost means that the world has access to any food it wants at any time. Let's take a look at 6 modern machines that dramatically increased the efficiency and production of farming operations across the globe.

As farmers know, weeding is an essential part of making sure you maintain a good crop. Letting your fields get overgrown can allow weeds and invasive species to choke out your cash crop and leave the farmer with pennies. Pesticides and weedicides are common, but many take issue with the possibly harmful chemicals hidden within. As a result, the Robocrop InRow Weeder was designed to quickly and effectively tear up weeds without worrying about hurting the original crops.

If you didn't know, olives grow on trees, which also makes them incredibly hard to harvest. Up until recently, the small oily fruit was picked by hand in a painstaking process by many workers. Now, farmers use an olive harvesting machine which shakes the tree, releasing the olives, and collecting them in one centralized location.

Cows are the most abundantly used livestock on the planet, from meat to milk, cow products help make the world go round. For large-scale milking operations, it simply isn't feasible to have hundreds of workers milking cows from morning until night. Even still, having workers attach automatic pumps to the utters is still in need of efficiency improvements. For this reason, this automated cow milking machine was invented which takes humans completely out of the process.

Potatoes are root vegetables, which means that harvesting them requires a lot of digging. The machine above tills the dirt around the potatoes and brings them up out of the ground. Even though the video depicts a small-scale machine, the same technology is used in tractor-towed rigs to harvest potatoes at an even greater scale.

Whether you knew it or not, lettuce is a very hard leafy green to harvest, and it often required hundreds of workers spending their days bending over and standing up. This repetitive motion opened up the industry to a wide array of back problems, and the farmers saw that something needed to be done. The above video gives an inside look into the lettuce harvesting industry and how, in this case, automation is actually creating better jobs.

As we mentioned with potatoes, root vegetables are notoriously hard to harvest, and carrots are no different. The tow-behind carrot harvesting machine above is perhaps the most mesmerizing of machines we have listed here, and its scale is just astounding. Think about the same process being done by hundreds of workers digging up carrots. Only then can the increase in efficiency in this process truly be grasped.

These machines are only a touch into the variety of  high-efficiency farming machines. The biggest fear with this scale of automation is a loss in jobs, creating an economy that is poised on skilled labor. While these innovations are amazing, the world will have to face the problem of skyrocketing unemployment in the future as automation like seen in the farming industry hits the rest of the workforce.