Once criminals' currency of choice, now people are using Bitcoin to save the world.

After the bust, the public relations backlash against Bitcoin was swift and severe but it looks like cryptocurrency is finally on the rebound. First, despite the naysaying, Bitcoin is unlikely to eclipse cash as the criminals' currency of choice anytime soon. Secondly, for every criminal mastermind coming up with ways to harness the blockchain for evil, there are companies, nonprofits and individuals coming up with creative ideas for using its powers for good. Here are a few ways that cryptocurrency is already making the world a better place:

Evidence suggests that climate change may be exacerbating the frequency and magnitude of natural disasters and extreme weather events, such as the rampant wildfires and hurricanes that took place earlier this year. According to The Economist, "since 1970, the number of disasters worldwide has more than quadrupled to around 400 a year."

Intense damage is sustained, thousands die and ripple effects continue well after the disaster zone is cleared. Enter Bitcoin: many charities worldwide now accept donations in digital currency. This makes it easier for relief organizations to access their money and put it to good use, explained Bitstocks, a cryptocurrency advisory group, in a blog post last month.

"Bitcoin offers the world many gifts, but an incredibly powerful one is the opportunity to initiate global payments, at an insignificant cost, with almost instantaneous availability. For charities spread across the world, this is an ideal mix of qualities to help fund their efforts and bring rapid relief to those impacted by natural disasters."

And it's not just cheap talk. Bitstocks set up a Bitcoin wallet and gave £10,000 to hurricane relief efforts, a donation you can verify—and add to—by clicking here.

Yes, the anonymity of blockchain transactions does make it easier for bad people to pay for bad things. So does cash. In the near future, however, it may also make them more likely to get caught. Transactions may not be traceable to a person—again, same with cash—but academics and working with law enforcement to find ways to use the blockchain's definitive ledger as a breadcrumb trail to the baddies.

The same article reveals how researchers have also been working on ways to map transactions in the ledger to IP addresses. It's not a perfect system yet, but they have made enough progress to pique the interest of the U.S. Department of Homeland Security.

Hands down, our award for most innovative use of Bitcoin for good goes to Project 256. This nonprofit contracts volunteer artists to respectfully depict homeless people in large-scale public art pieces in major cities using 256 cans of spray paint or less (hence the name). Portrait subjects are equipped with refurbished smart devices with Bitcoin wallets. Each mural is tagged with a QR code for viewers to scan to find out more about the person in the painting and make a crypto-donation, which is immediately transferred to the person in need. No prior experience with Bitcoin is needed; Project 256 even helps donors set up a Bitcoin wallets. The video below shows more about the project.

More than two billion people worldwide are considered "unbanked," which means they lack access to financial services through banking institutions. A majority are women, and most live in developing nations in Africa and Asia.

"According to the most recent Global Findex data, from 2015, 89 percent of adults in high-income economies report having an account at a formal financial institution; in developing economies, 41 percent of adults do," reported the Consultative Group to Assist the Poor (CGAP), a financial inclusion consortium, on their website.

Mobile devices are a much lower barrier to entering a global, digitized economy then establishing a relationship with a reputable financial institution, which may not even exist locally in some areas. And digital micro-loans and payments are easier, faster and cheaper to accept for independent workers and small business owners outside the North America and Europe, said a Foreign Affairs article earlier this month. These same benefits apply to other monetary exchanges, for example, remittance payments that immigrants send to their families back home. 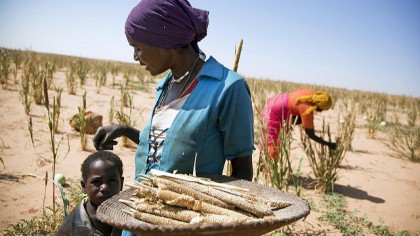 "Disparities also exist by gender. Among adults in developing economies living below the $2-a-day poverty line, women are 28 percent less likely than men to have an account at a formal financial institution."

Additionally, Bitcoin is already being used to help these vulnerable populations participate in a global economy. CEO Roya Mahboob has paid Afghan women writers with Bitcoin, allowing them to not only generate income, but also to retain control of it, revealed the serial tech entrepreneur on the Forbes Unchained podcast.

Zimbabweans are using Bitcoin to deal with the recent scarcity of U.S. dollars in their difficult economy. U.S. currency was introduced in 2009 as an antidote to astronomical 200 million percent inflation of Zimbabwe's own dollar, according to the U.S. news organization National Public Radio. Now, with the paucity of dollars, many people are investing in relatively inflation-proof Bitcoin as a backup.

Via: QZ, The Economist, Science Magazine