These ancient inventions have baffled scientists for years.

There are archaeological discoveries out there that have left scientists dumbfounded, inventions that occasionally paint a very different picture of our ancient world. Ancient inventions can be groundbreaking, giving us more insight into past cultures, people, and technology. Sporadically, researchers do find inventions that seem to be way ahead of their time, with a few of them almost impossible to recreate even with our modern technology. 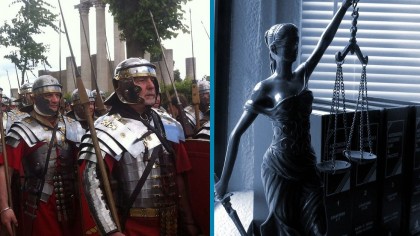 From analog computers that are thousands of years old to lost military technology, there are some ancient discoveries worth looking into. What makes a lot of these lost technologies so interesting is how revolutionary they would have been if they caught on by now. Who knows? We could have had an industrial revolution much earlier, spawning earlier technological advancements. Perhaps you could have had your hovercar by now.

Imagine spending your life coming up with your invention for it not to gain steam (pun intended for one case). Or come up with a revolutionary idea only to have it fail because of the current limitations of the time.

Let's start with a bang. When the Antikythera mechanism was first discovered, it left scholars deeply confused, and for a good reason. This ancient invention was discovered on the small geographically unique Greek island called Antikythera, an island located between the more popularly known islands of Kythera and Crete. The device was found in 1901 in sunken wreckage by divers out looking for sponges. On the wreckage, divers found beautifully preserved artifacts that dated back nearly 2,200 years, nothing too out of the ordinary, until they came across a greenish encrusted lump.

At first glance, you might think that the Antikythera mechanism is nothing to write home about. It looks like a rock with patches of mold. But, upon further inspection, you will see gears that were functional at some point, pieces that resemble an old clock. Upon its discovery, there were a few groups of scholars willing to call the device the part of an ancient computer, yet this was initially written off. The mystery behind the Antikythera did not start to break ground until the 1970s and 1990s. And guess what? It was a computer.

In short, the idea is that it was part of an ancient analog computer complete with bronze components stored in a wooden box. It has been speculated that the ancient invention was used to travel as the device was able to "replicate the motions of the heavens." The device would have not been any bigger than a mantel clock that you have at home. However, rather than display time as we know it, it would display celestial time, using the planets as guides. What is weird about this device is that if it was commonly used, wouldn't we have found more? In the world of archaeology, we have yet to come across something as sophisticated and advanced...yet.

2. Baghdad Battery: The ancient version of the battery

This is easily one of the more controversial ancient inventions on this list. Even more so, the ancient device was stolen in 2003 and has yet to be found. As its name implies, the Baghdad Battery, also known as the Parthian Battery, is a 2,000-year-old ancient artifact that could be an ancient version of a battery. The ancient invention was discovered in 1983 by a German archaeologist in Khujut Rabu, an area right outside of Baghdad.

Inside the clay jar, you will find a copper cylinder and iron rod. If you were to pour a weak acid into the clay jar, something like vinegar or even grape juice, the combination would cause the "battery" to generate about 1 volt of electricity. However, why would an ancient civilization need a battery?

At the moment, that is unclear. In fact, to this day, archeologists have only found one battery. Even more so, there is no written record describing the exact function of the jar. However, researchers have a few prevailing theories about the ancient invention. The Baghdad Battery was potentially used to electroplate items, the act placing a layer of one metal onto the surface of another. Another idea is that the device was used in religious ceremonies. The battery was used to literally shock devotees into belief. Nevertheless, the Baghdad Batteries' true purpose is still up for debate with no valid explanation in sight.

3. Automated Doors: The Greeks had them before you

Automated door technology made its appearance in 1931 and was considered to be one of the signs of the "modern" age. Yet, the world had already seen this technology all the way back in 1 AD. So how did it work?

If you wanted to open the door a fire would need to be lit to generate heat causing an atmospheric build up in brass vessels. This vessel would then pump water in holding containers, and these functions would act as weights to open the door. Think of it as a hydraulic system. Unfortunately, the doors were not that practical and not as popular as the modern doors you have around your city.

The ancient doors actually took hours to open and the process was hard to stop once it started. So, this probably meant that you only opened your doors once a day.

Every year earthquake detection technology is getting far more advanced, detecting a natural disaster before it happens, and saving lives. However, the technology may not be that new. Dating back to 2,000 years ago to ancient China, the Houfeng Didong Yi, a seismoscope, was the first earthquake detection device recorded in history, and it was actually very effective. The person who created the tool was Zhang Heng. Dubbed the Leonardo da Vinci of China, the renaissance man was an inventor, astronomer, engineer, scientist, scholar, and artist.

Though his long list of work and accomplishments are all worth mentioning, his Seismoscope takes the cake. The Houfeng Didong Yi was able to detect earthquakes hundreds of kilometers away remotely. The jar device featured eight tubed projections shaped as dragon heads on the exterior, with eight corresponding toads at the base of the jar. Each of the toads represented a direction in which the seismic wave was traveling.

To indicate the direction of a distant earthquake, the ancient invention would drop the ball in one of the toads.

What is even more strange is that Zhang Heng believed that earthquakes were caused by wind and air, stating "The chief cause of earthquakes is air, an element naturally swift and shifting from place to place. As long as it is not stirred, but lurks in a vacant space, it reposes innocently, giving no trouble to objects around it."

"But any cause coming upon it from without rouses it, or compresses it, and drives it into a narrow space ... and when opportunity of escape is cut off, then 'With deep murmur of the Mountain it roars around the barriers', which after long battering it dislodges and tosses on high, growing more fierce the stronger the obstacle with which it has contended." How was he able to figure out how to remotely detect earthquakes? This question still baffles researchers today, as no one has been able to recreate a functioning device successfully.

5. The Armored Car: A future tank

Many of Leonardo da Vinci's ideas could easily make this list. Yet, like his armored car idea, many of them were not created due to the limitations of the times. From the parachute to the diving suit, all of these would suffice. Even more so, Da Vinci inventions like the ball bearing, the parachute, machining gun, and revolving bridge are all things that are used today, hundreds of years later.

His ancient invention, the armored car, was one of our favorites. A potential precursor to the tank, the armored vehicle would have been filled with canons and able to move in every direction.

The Battle of Blackwater is one of the most memorable scenes in Game of Thrones, with the battle being decided by an intense green fire that could not be put out with water, and that to burn endlessly. What if I told you that this battle is partially based on history? The ancient invention, Greek fire, was a devastating invention, playing an essential role in the crusades.

First invented in 672 AD by the Eastern Roman Empire, the fire was known as many different things like sea fire, Roman fire, or war fire. The military weapon made its debut on the historic stage when the Byzantines were attacked by a massive naval fleet of their current enemy, the Muslims. The attacking force had never seen anything like Greek fire before, burning ships, people, and even burning on top of the water. The Greeks very literally hosed their enemies down with fire.

The Greeks would later develop different ways to use the ancient invention, creating everything from a fire hose (shoots fire, not water) to fire grenades. Enemies of the Greeks did smarten up and find ways to put out the fire using vinegar and old urine. Nevertheless, no one has ever been able to recreate Greek fire. The secret was tightly guarded for centuries.

The closest modern technology has come to creating Greek fire is Napalm. Nevertheless, no one has come up with the ancient invention's formula yet.

What would happen if this technology gained steam and was used to tackle projects? We assure you that the world would be very different. Dubbed the Aeolipile, the steam turbine was invented in the 1st century AD by the mathematician and engineer Heron of Alexandria and was even described in great detail in his Pneumatica. The ancient invention was a hollow sphere mounted in such a way that it could turn on a pair of hollow tubes that provided steam to the sphere from a cauldron. The steam would then escape from hollow bent tubes placed on the square causing the device to revolve at high speeds.

Though it was an impressive functioning device, it never really went beyond just being a novelty device. The Aeolipile was used to entertain royalty and was even considered a children's toy. Even more so, acquiring the fuel for the device to run extended periods of time was not easy. There are modern iterations of the device, and you can even create one from home.

Will we find more?

Over the next couple of decades, there are sure to be a host of new inventions that will shed more light on the technological achievements of our ancestors, ancient inventions that could potentially give more insights about our future. Maybe there were some really advanced civilizations lost to the seas of history. What do you think?