7 Atmospheric Science Fiction Soundtracks That You Should Definitely Revisit

Music can make or break a film. If anything, the right atmospheric track is just as equally important as the writing, directing, and acting.

Try watching one of your favorite science fiction movies without sound. There’s a good chance that the experience will just not feel the same. Music, especially in the popular genre of science fiction, plays a crucial and, at times, an underappreciated role in a film.

See Also: 7 Films That Absolutely Get The Science Right

Plot, character, and cinematography all take center stage, but for most music sits in the background. However, as you have already probably noticed the right sounds in a film can define a moviegoers' experience.

Imagine if the moody scenes of Blade Runner were scored cheesy with pop music. Or, if Nolan decided to score parts of Interstellar with a lo-fi banjo. It would not go over well with audiences.

How about a little Atmospheric Music?

Films like Blade Runner and Interstellar all share one thing in common, they have borderline epic and atmospheric soundtracks, with in some cases, the music outshined the movie.

For the uninitiated, ambient music or atmospheric music is a genre of music dedicated to creating a certain feeling or “atmosphere” rather than creating a formulaic record you might hear on the radio. 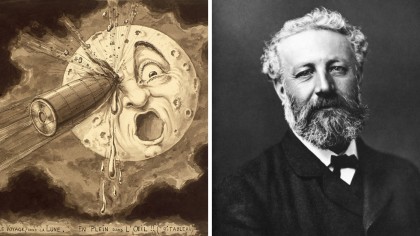 Whether it is to portray emotions, connect scenes, or even make references, atmospheric music and science fiction go hand in hand, ushering in a wave of sonics that at times can be truly awe-inspiring. Ready for the journey?

Ghost In The Shell - Kenji Kawai

First up on the list is a film that has probably inspired all your modern favorites. Ghost in The Shell, the futuristic cyberpunk masterpiece directed by Mamoru Oshii’s helped pushed the science fiction genre forward. Amid its beautiful animation, the film addressed topics centered around Eastern philosophy, cyber terrorism, and humanity.

Though you may not be a fan of remakes or sequels and might have a little beef with the plot, you cannot ignore the sleek visuals and sonics coming from the film. Tron has a special place in the hearts of people around the world, so getting the music right was a major priority for the director Joseph Kosinski.

Lead by the electric duo, Daft Punk the atmospheric soundtrack combines aggressive electronic synths, made popular in the 90s, with the more traditional orchestral scoring to create a mood that is sure to get you pumped for the “The Game Grid."

You probably saw this coming a mile away. Considered a living legend, when Hans Zimmer is involved, you know the score is going to be epic. Nolan wanted to explore something new in his film Interstellar and needed a soundtrack that matched the physics-friendly space film.

Zimmer created an atmospheric soundtrack that pulls at one's heartstrings, masterfully layering organs sounds, plucks, and epic swelling strings, matching some of the very emotional climaxes in the film.

Interestingly, when writing the main theme for this film, Zimmer did not know that the film was a space epic and was informed by Nolan to write a piece that captured the relationship between a father and his son. You might end up “chopping onions” while listening to this soundtrack.

Moon was a hidden gem in the science fiction community. If you have not seen it yet, the soundtrack may have you jumping to see the film.

Almost meditative in nature, the Clint Mansell score uses elements from classical music, 70s electronic music, and post-rock to carry out some of the major themes in a powerful and touching film.

Blade Runner is that science fiction movie. Very few films in the genre have attracted such a wide cult following and influence as Blade Runner. The futuristic detective film directed by Ridley Scott is a pure exercise on mood. Each scene is crafting meticulously with a dark, brooding atmosphere that matches the city and its protagonists.

The heavy synth-driven soundtrack, brought into fruition by Vangelis, go hand in hand with the film. Bouncing wooden percussion, spacious synths, and panoramic arpeggiators do a sonic job of telling the story of the film.

Solaris will probably make you feel something and that is not just because of great writing or performances. True to his form the Steven Soderbergh film was moody, tackling the themes of sorrow and loneliness.

Scored by Cliff Martinez, orchestral sounds help push the story along, while the small electronic twinkles, subtle leads, and layering create heavy and sad themes that linger in a lot of the scenes from the film.

A film by the talented Denis Villeneuve, this science fiction film explores the ideas of time, space, extraterrestrials, and language. Masterfully curated and shot, this film requires an ambient soundtrack.

Created by Jóhann Jóhannsson, the sonics on the soundtrack is mind-bending, populated with off the wall plucks and strings and the occasional orchestral rise.

The soundtrack does an excellent job at conveying both the out of the world characters in the film and some of the deep philosophical themes.

7 Times That "Rick and Morty" Got the Science Right

15 of The Best Science Toys That Money Can Buy