Georg Ohm would create one of the most fundamental and well-known laws of electricity. But he was largely ignored for most of his life.

Chances are you are more than a little familiar with his famous law, and might even use it every single day. Whilst his law has since become fundamental to physics, it is interesting to know that it went largely ignored for much of his life.

Georg was born on March the 16th, 1789 in Erlangen, Bavaria (now Germany). He was the son of a blacksmith who would prove to be instrumental to Ohm's early exposure to mathematics, physics, chemistry, and philosophy.

Georg would spend many years investigating the very nature of electricity and struggled to get much recognition for it early on. This all changed in his later years when he was finally recognized for his great work by the Royal Society in London.

Goerg would later die on the 6th of July, 1854, has is one of the best-known men of science today,

1. Georg Ohm was an early adopter of electricity

Georg Ohm was an early adopter and experimenter with electricity. After he graduated from University he took up various teaching positions in Bavaria. 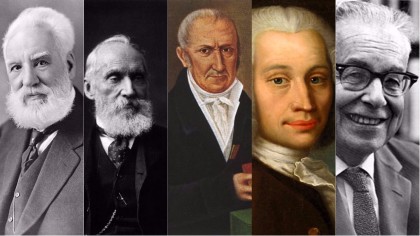 He had joined the mathematics department at the University of Erlangen as a lecturer in maths. He quit only a few months later as the salary could barely support his expenses.

This forced him to shop around for new work, and soon after the Bavarian Government offered him teaching positions in several schools in Bamberg.

During one of these postings, he appears to have acquired or built, an early electrochemical battery invented by the great Alessandro Volta.

Using this equipment, and other pieces of his own invention, Ohm would go on to make his groundbreaking work on the principles of electricity.

2. Despite his later success, he had no formal science training

Georg Ohm and his brother Martin did not receive a very high level of education in school. But fortune seems to have smiled on the young Ohm brothers.

Their father, a local and highly respected blacksmith, Johann Wolfgang Ohm, had been formally educated. He also happened to be an avid reader and prided himself on educating himself to a very high level for the time.

Their father was able to provide his children with an excellent education from his own teachings. He educated his sons to a very high standard in mathematics, physics, chemistry, and philosophy.

This was in stark contrast to his more formal education at Erlangen Gymnasium. Here, between the ages of 11 and 15, he received little, if any, scientific training.

Thanks to his father's input, he was later able to attend University and meet Karl Christian von Langsdorf. Karl would later inspire Ohm to push himself and make the most of his curiosity.

3. Ohm's Law was rejected at first

Ohm's famous first law appeared in his book Die galvanische Kette, mathematisch bearbeitet (The Galvanic Circuit Investigated Mathematically) that he published in 1827. Within this seminal book, he laid out his complete theory of electricity for all the world to see.

But, much to his disappointment, his work didn't make the impact he was hoping for. At least at first.

At the time of writing, Ohm was teaching at the Jesuit Gymnasium in Cologne. This school was very well equipped and allowed Ohm to begin making his own experiments in physics.

Borrowing from the teachings of his father, most importantly his blacksmith skills, Ohm was able to significant headway in the study of electricity.

But, when he presented his work, the college did not fully appreciate the significance of it. Ohm quickly resigned his position and left the school.

Ohm was quickly snatched up by the Polytechnic School of Nuremberg in 1833.

4. In fact, Ohm's law was largely ignored for years

It is incredible to think today that Ohm's Law was coldly received in his day. But sadly this was true.

Not only did the Jesuit Gymnasium in Cologne not appreciate it's importance, but so too did much of the scientific community in his home nation.

But this all changed several decades later when Ohm was finally honored with the highly coveted Copley Medal by the Royal Society in 1841.

Ohm was also honored with becoming one of the very few foreign members of the Royal Society in 1842. In 1845, he was finally recognized for his accomplishments at home when he became a full member of the Bavarian Academy of Sciences and Humanities.

His later recognition might have a helping hand thanks to some PR work by the great Charles Wheatstone. He helped to draw the attention of the Royal Society to Ohm's work.

5. Ohm also made some fundamental laws of acoustics

Georg Ohm was not a one-trick pony, not by a long shot. He also attempted to put his mind to some of the fundamental principles in the field of acoustics.

His Acoustic Law, sometimes called the acoustic phase, is, today, well known. Ohm formulated his law in 1843 and has since been found to be not quite correct.

Within his law, Ohm believed that musical sound is perceived by the ear as a set of a number of constituent pure harmonic tones.

Whilst it is true that the human ear is sensitive to frequencies and amplitudes of acoustic waves, Ohm's law is technically right. Today we understand that human hearing is only partially able to do this.

Whilst working at his first teaching posting in Bamberg, Ohm was very unhappy with his job. To keep his mind occupied, he decided to write an elementary textbook on geometry.

When the school he was working at was closed in 1816, Ohm was relocated to another overcrowded school in Bamberg to give them a helping hand.

Whilst there, he completed his textbook and sent the completed manuscript to none other than King Wilhelm II of Prussia. The king was very impressed and offered him his later position at the Jesuit Gymnasium in Cologne in 1817.

7. Ohm's law is simple but powerful

Ohm's most famous work, his law of electricity, is a simple but incredibly powerful mathematical tool. It forms part of a larger work that he published in 1827, that also includes an introduction to the mathematics needed to understand and use it.

His law effectively treats electricity like water in a pipe. He discovered that a circuit is directly proportional to the electric pressure and inversely to the resistance of the conductors.

The law, in and of itself, is very simple but has incredibly important real-world applications.

Ohm's law is today, one of the most important tools used by electricians and electrical engineers throughout their careers. It also forms a fundamental component of all school children's tuition on electricity and physics in general.

Whilst his work was largely ignored during his life, it is fitting that his work is taught to millions of children every single day.

15 Fun and Surprising Facts About the Periodic Table of Elements