We looked at young computer programmers who are making waves around the world and tech leaders who started programming at an early age.

Programming is becoming an essential skill. Aside from the tremendous demand for programmers across the world, there are a lot of overlooked benefits of learning how to code. Coding teaches the power of persistence, structured and creative thinking, and plays a vital role in our everyday lives. Steve Jobs said it best when he stated, “Everybody in this country should learn how to program a computer... because it teaches you how to think." If you are looking to code, now is probably the perfect time to start.

There are countless resources out there to help people of all ages get started immediately. In fact, if your kids want to jump into the world of coding or if you want to show them the power of coding, there are a lot of ways to do so from home at the moment. Learning an essential skill like coding has a host of benefits at a young age, properly preparing a child for our increasingly technology-dependent world. Some of the biggest challenges now and in the near future will be solved with a few lines of code. 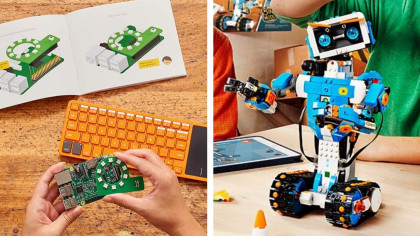 Today we are going to explore some of the youngest talented programmers around the world and the famous programmers who went on to reshape our society. If you are looking to program or want to get your kids interested, here is a little motivation. But first, let’s do a short review.

What is computer programming?

These instructions are known as code, and computer programmers write code to solve problems or perform a task. Computer languages vary, serving various purposes, but optimized for specific projects. A few lines of code can instruct the software in your computer how to function drive artificial intelligence, and even power a spaceship.

Why start coding at a young age?

The aim is not necessarily to have a little software engineer floating around the house. Just like with adults curious about programming, there are a host of practical, real-world benefits of learning how to code. First and foremost, computer programming teaches children how to solve problems over time, a general trait that applies to all aspects of life. Even more so, children who learn how to program develop resilience, expand their creative skills, and set themselves up for an industry that needs talent. Technologies like Artificial intelligence, IoT, and robotics require a programmer's touch. Not to mention, there are a lot of creative things you can do with coding in the arts and the design world.

Some of the following famous programmers started off learning at an early age applying their skills to better the lives of the people around them, creating some of the products that you use today. Other members on this list are simply current programming prodigies on their way to do the same. The next Bill Gates perhaps?

Quote: “Learning to write programs stretches your mind and helps you think better, creates a way of thinking about things that I think is helpful in all domains.”

Coding Fact: In 1968, Gates and his friends spent hours playing with the computer and learning its programming language: BASIC, or Beginner's All-purpose Symbolic Instruction Code.

Most of you know the story of Bill Gates. The philanthropist, billionaire, and Microsoft co-founder has had a tremendous impact on your life, helping usher in a whole new era in computing. However, many people are not aware that Bill Gates started coding at an early age, fascinated by how computers work.

Gates spent a majority of his childhood missing classes so that he could go about building his first program, a tic-tac-toe game where users play against the computer. He even would exploit these computers so that he could get more computer time. Years later, as an adult, Bill Gates is one of the biggest voices for coding education, computing, and emerging technology.

Coding Fact: Muhammad Hamza Shahzad is currently the youngest coder in the world.

How old were you when you started to learn to code? Or found your passion? The nine-year-old British Pakistani from Birmingham, UK, Muhammad Hamza Shahzad discovered his passion at an early age, becoming one of the youngest accomplished programmers in the world. Starting at the age of six, Muhammad grew up around computers, developing his love for programming, and has the goal of becoming the next Bil Gates. Not only is he talented, but he is certified. Muhammad recently completed a Microsoft coding certificate after studying for six months. His score? 757, 57 points higher than the required passing score.

Quote: “Universities have come to realize that online is not a fad. The question is not whether to engage in this area but how to do it.”

Coding Fact: Daphne Koller is the founder of the online learning platform Coursera.

Daphne Koller became interested in coding at an early age, later using her love for computer science to advocate coding and online education. The Israeli-American professor of computer science at Stanford University and MacArthur Fellowship recipient created Coursera, an online network of courses curated and produced by leading institutions. Here you can learn everything you need to know about coding as well as other build skills in other subjects.

Quote: “You have to be passionate about programming before you can program.”

Coding Fact: Tanmay Bakshi has given a TedTalk on his love for programming.

Another young and famous programmer, Tanmay Bakshi, caught the world’s attention and for a good reason. Not only is Tanmay a software developer, but he is an author, speaker, Youtuber, and the world’s youngest IBM Watson developer. The young talent began his programming career at the age of five, while at the age of eight, he designed his first app. Tammy described is excitement for programming at a young age stating in an interview with Factor Daily, “First of all, I had pretty much nothing to do when I was five years old.”

“My dad was a computer programmer, and since he would code a lot, it kind of intrigued me how computers could display things like ‘hello world’ and even my name. As a five-year-old, I thought it was magic, and I wanted to know how it’s done and get to the depth of it.”

Dubbed TTables, the iPhone app helps kids learn how to do their multiplication tables. Finally, Tanmay became an IBM Watson developer at the age of 12. Currently, Tanmay is working on a project with IBM that centers around helping a quadriplegic woman learn how to communicate through the power of artificial intelligence.

Quote: “All of my friends who have younger siblings who are going to college or high school - my number one piece of advice is: You should learn how to program.”

Coding Fact: Mark Zuckerberg was not only a talented coder as a kid was but an excellent fencer.

Love him or hate him; you probably clicked on this article because you saw it on Facebook. Similar to everyone else on this list, Zuckerberg has been a huge proponent of education and explicitly coding. The co-founder showed his interest at an early age after his father taught the young Zuckerberg the Atari BASIC programming language in the 90s, eventually getting software developer David Newman to tutor his son privately. The Facebook co-founder eventually honed his craft to the point that he could create his own computer games and, eventually, ZuckNet, a precursor to AOL’s Instant Messenger, that allow various computers to communicate with each other within his family network.

Quote: “When you’re in a community, it’s easier to learn.”

Coding Fact: Isabel Sieh is the Founder of “Girls Will Code.”

The Filipino-American teenager began her coding journey at the age of 10. This love for coding initially started when she quickly discovered how much she loved math. Getting directed to the coding, math, and science website Codeacadmey by her teacher, Isabel picked up HTML, CSS, and JavaScript and is currently practicing Python. She recently founded the company “Girls Will Code” to help other young girls interested in learning how to code find their path.

Quote: “Make every detail perfect and limit the number of details to perfect.”

The Twitter CEO used his early passions for trains, cities, and maps to ignite his passion for coding. Dorsey fell in love with computing when his parents bought him a Macintosh computer at the age of eight, eventually building maps on his laptop using software programming. As a teenager, he spent his time working in dispatch routing. While at New York University, the talented coder eventually came up with the idea that would eventually lead to the creation of Twitter.

How do I become a computer programmer?

If you are looking to jump into coding, or know of a young person that would like to try coding. There are plenty of resources across the web. Though these will not turn you into a software engineer overnight, they are a great place to start. Tools like Minecraft for Education, Kodable, and Tynker are perfect for kids, while Udacity Codecademy can help adults get started.

When did you start learning to code, and how do you think it impacted your life?