7 Fascinating Tornado Facts That Will Make Your Head Spin

How does a tornado form? What was the most destructive tornado in recorded history? Here we have compiled 7 interesting tornado facts for your delectation. 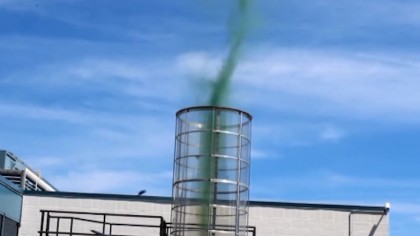 They are rightfully respected and feared in equal measures and as a result are quite fascinating events. We have collected some interesting tornado facts that will make your hairs stand on end.

Whilst they are terrible events, it doesn't mean you need to lose sleep over them. It may even be possible to use tornadoes to our advantage in the not too distant future.

If you are unfortunate to live in areas susceptible to tornado formation you can also take some simple precautions to save your life and that of your family.

A tornado is characterized as a vertical funnel of rapidly spinning air. These meteorological events also need to make contact with both the surface of the Earth and a cumulonimbus cloud or cumulus cloud to actually be classified as a tornado.

Other terms for this kind of weather event include a twister, whirlwind. It differs from a cyclone has a low-pressure system at its center that rotates counterclockwise in the Northern Hemisphere and clockwise in the Southern.

Wind speeds can reach 400 kilometers per hour and tend to wreak a path of destruction of around 1.6 miles wide and 80 kilometers long - though this does vary widely.

What causes tornadoes (and end)?

Tornadoes tend to form as a consequence of another weather phenomenon, thunderstorms. Ripe conditions for a tornado to form exist when warm, moist air meets cool, dry air.

When these two differing air masses meet, they create a lot of instability in the atmosphere. Changes in wind direction and an associated increase in wind speed occurs with increasing altitude.

This ultimately leads to the formation of a rotating, often many kilometers wide, this mass of air that extends through much of the storm.

Once this makes landfall all 'hell' then breaks loose.

1. They can be predicted but you don't get much warning

Currently, it is impossible for tornado forecasters to predict their formation like hurricanes. That being said they can provide enough notice to potentially save your life if you are paying attention to notices, that is.

At present, the current maximum warning they can provide is somewhere in the order of 13 minutes. Whilst that's not an enormous amount of time it should give you at least enough notice to at least try to find a shelter.

Warning signs of an impending tornado's formation include things like a dark, greenish sky, large hailstones with no rain, and a powerful train-like roar.

2. This was the deadliest tornado in U.S. recorded history

On March the 18th, 1925 a deadly tornado tore through various states of the U.S. After it had finally abated the death toll it left in its wake was appalling.

Records show that it managed to kill 11 people in Missouri, 613 in Illinois and 71 in Indiana. It was part of a phenomenon called a "Tornado Outbreak" which is a series of destructive storms that touch down over vast geographical ranges.

Not only was it the deadliest tornado in history it also happened to the one with the longest single track. Plots show that it had an estimated 352km-long uninterrupted path of destruction.

Not only that, but this event also holds the record one of the fastest tornado in U.S. history. Estimates from the time show that it had a forward speed of around 177 kmh.

3. This guy holds the record for the longest distance carried by a tornado

Tornados tend to be highly destructive and often tragic events. But there are some heart-warming stories that do appear from these freak acts of nature.

One chap, Matt Suter of Fordland, Missouri, actually holds the record for the longest-known distance traveled by a single person in a tornado.

Not only that, but he actually survived the encounter to tell the tale. It happened on the 12th March 2006 when he was captured by a tornado and deposited just shy of a quarter mile at around 398 m away.

This must have been both one of the most terrifying and exhilarating experiences in Matt's life. Sadly it's far more common for victims to have their lives cut tragically short but such encounters.

4. North America is more susceptible to tornadoes than other parts of the world

Tornadoes can actually occur anywhere in the world, but there is a reason that most appear to affect North America. The geography of the continent actually makes it more vulnerable than other parts of the world.

An atmospheric scientist from the National Science Foundation, Bradley Smull, explained the reason why in an interview with the Washington Post.

"In particular, the proximity of a major north-south mountain range...and the Gulf of Mexico...all in a latitude range frequented by strong upper-level jetstreams amounts to something of a "perfect storm" for severe (supercell-type) thunderstorm formation".

This fact means that the continent suffers from hundreds of tornadoes of various strength throughout the year. Many of these also tend to be devastating events.

5. But there is one part of North America that is particularly susceptible

There is a reason tornado Alley got its name. This is a flat stretch of land between Texas and North Dakota.

This part of North America is a literal hotspot for tornadoes. This is because the area is the meeting place between dry polar air from Canada and warm moist tropical air from the Gulf of Mexico.

The term was first coined in 1952 and has become a largely media-driven term since. Despite this, there other tornado hotspots around the world.

Other include some parts of Europe and Australia, as well as the Pampas lowlands of Argentina and parts of Uruguay and Paraguay and Brazil. In fact, parts of India and Bangladesh also exhibit some of the highest frequencies of tornadoes outside of the continental United States.

6. A tornado might have saved Washington D.C. from the British

During the lesser known War of 1812, Washingon D.C. might well have actually been saved from British retribution by a tornado. This war raged between 1812 and 1815 and was, to the British at least, a minor theater of war during the greatly more serious events of the Napoleonic Wars.

To many Canadians, this is an important moment in their history but is largely unknown in the United States. At one critical juncture in the war, British forces were able to capture the American capital of Washington D.C. in 1814.

Interestingly, this has been the only time since the American Revolution that a foreign power has captured and occupied the United States capital.

The effective sacking of the city by British forces followed their decisive victory at the Battle of Bladensburg on the 24th August of 1814. But it seems the city was saved from complete destruction by an 'act of god' the following day.

It seems the city can 'thank its lucky stars' thanks to the serendipitous arrival of a tornado.

7. The deadliest tornado in recorded history was in Bangladesh

Whilst the United States tend to take the brunt of global tornadoes, the record for the deadliest is actually held by Bangladesh. The World Meteorological Organisation recognizes the tornado that wreaked havoc in Manikganj, Bangladesh was the worst ever recorded.

It struck on the 26th of April, 1989 and after carving a path of destruction over 16 km long, it left an estimated 1,300 people dead in its wake. A further estimated 12,000 people were also suffered minor or near life-threatening injuries.

Any and all structures within nye-on 6 squared kilometers were also destroyed, leaving an approximate 80,00 people without a place to live.

To put things in perspective the deadliest tornado in America was the aforementioned Tri-State tornado of 1925. This 'only' killed around 700 people as it tore up anything in its path.