These shows hosted by women cover everything you have ever wanted to know about the science world. Physics, robotics, neuroscience, hacking and even fish aliens are all topics on these ladies' lists and more!

The STEM fields (science, technology, engineering, and mathematics) have long had a bit of a women issue. Study after study has found many obstacles to women both entering and staying in these crucial industries. 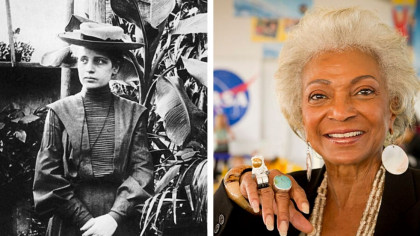 For instance, 2014 Unesco research revealed that women accounted for less than a third (28.8%) of those employed in scientific research and development across the world. Further 2017 studies found that those that did enter STEM-related careers were also significantly more likely to leave than men.

When they did stay, 2008 research by the Center for Work-Lefi policy found that their careers on average peaked within 10 years. Among the many reasons given for women’s decisions to leave, isolation, hostile work environments, and a lack of effective sponsors were often cited.

At IE, we are proud to promote and celebrate women in STEM and in that spirit we have combined a list of our favorite seven female-lead YouTube science shows that prove that women are on their way to breaking future STEM glass ceilings. You go girls!

Dianna Leilani Cowern, also known as Physics Girl, is a science communicator who uploads creative and entertaining videos explaining in simple terms complex physics, astronomy, and science-related topics. The show is hosted by PBS Digital Studios and even features many do-it-yourself demos and expert interviews.

Cowern actually began her careers as an outreach coordinator at the University of California's San Diego's Center for Astrophysics and Space Sciences but only started making her uniquely fun videos while working as an app developer at General Electric. She has often said that one off her goals is to make science more accessible to girls and judging by her large audience we bet she has!

This next PBS Digital Studio-hosted female-lead science show is another of our favorites. True to its name, Gross Science states that it covers "bizarre stories from the slimy, smelly, creepy world of science."

Before, you get too excited we should let you know that its host Anna Rothschild accepted a job with The Washington Post and put the show on hiatus. Still, there are plenty of her old clips online for you to watch and if you miss Rothschild you can follow her on Twitter and check out her new show!

This brilliant and inventive YouTuber builds robots. More specifically, she builds "shitty robots." Her words, not ours! We love her crazy cooky fun creations.

She has been featured everywhere from viral threads to the Ellen Degeneres show and, best of all, this ingenious young woman is self-made. In fact, she refers to herself as a "maker/robotics enthusiast/non-engineer." How's that for girl power?

Emily Graslie is the current Chief Curiosity Correspondent of The Field Museum in Chicago (yes for real!) and a former volunteer of the University of Montana Zoological Museum. Her mission is to share some of the "amazing things" the museau has in their collection and amazing is indeed the right word!

From a fish that looks like an alien demon to bullet ant venom, Graslie brings to audiences on the internet things you would think exist only in science fiction. The YouTube educator was notably asked to join the Nerdfighter network after appearing in a VlogBrothers video by Hank Green in 2012 and we have to wonder what took them so long to notice her!

This educational video series is hosted by none other than Australian science communicator Vanessa Hill. This original and artistic series uses both stop motion and paper craft animation to explore neuroscience, psychology, and human behavior.

Also part of the PBS Digital Studios network, this host and show probably offer the most animated look at science you will ever get and cover some pretty bold subjects such as ghosting!

6. GoldieBlox: a hacker engineer with a squad

This engineer and hacker calls herself GoldieBlox and even comes with her very own girl science crew: the appropriately-named GoldieSquad. Targeting a younger audience, this intrepid YouTuber hosts videos that feature everything from life hacks, to arts and crafts, to barbie robots, to slime experiments and more!

Now, this show is made for today's digital world. "We are more digitally savvy than ever but also more digitally illiterate," says host Danielle Thé and she is here to solve that issue.

The self-proclaimed tech enthusiast answers questions you likely always pondered such as how being online for so long is affecting us all and whether or not our laptop cameras are stalking us. Thé aims to make sure we control technology and not the other way around, a worthy goal.