7 Geoengineering Solutions That Might Cause More Damage Than Good

We share 7 technological fixes that could be a danger to the natural world.

Today we celebrate World Geology Day and nothing makes more sense than to stop for a few minutes and reflect on some good old geoengineering solutions that we have devised for the betterment of humanity. How good are these solutions?

Can they do more harm than good in the long run? Today, we will check out the top 7 geoengineering solutions that might be primed for a failure! But first, let us answer a few vital questions!

What Is the Purpose of Geoengineering?

Geoengineering, in simple terms, can be defined as the manipulation of a particular process or a number of processes on a large scale in order to control the climate of the Earth. The purpose of these experiments is to get some form of benefit out of them in view of the global climate scenario.

Therefore, geoengineering or climate engineering, in other words, aims to intervene in the world’s natural systems in order to combat climate change directly and effectively.

What Is Solar Geoengineering?

What Are Geoengineering Schemes?

Geoengineering schemes are essentially projects that are designed to tackle some of the most dangerous effects of climate change. These schemes work towards restricting the amount of sunlight that reaches the surface of the planet or eliminating carbon dioxide from the air.

However, in this article, we will concentrate on 7 geoengineering solutions that might cause more damage than good.

According to engineer Mark Hodges, who was featured on Discovery’s show called Project Earth, forests absorb substantial amounts of carbon which is why they are known as “carbon sinks.” In this geoengineering solution, planes would drop canisters of wax on land containing fertilizers and seedlings.

These canisters would explode and grow into forests after hitting the ground. This technology would prove to be a great ally to lower down the temperatures on the planet. That said, this solution could have an adverse effect on water bodies if these canisters are unintentionally dropped in oceans.

This could prove to be a threat to aquatic plants and animals.

As proposed by David Keith, a Harvard professor who has collaborated with World View Enterprises, spraying ice particles or dispensing balloons filled with ice into the stratosphere can potentially reflect the sunlight entering the Earth and prevent the planet from warming up even further. Although it is a great idea in theory as the ice could help the ozone layer, to make this plan a success, jet aircraft and balloons would have to coordinate in the sky.

Also, since a large number of such balloons would be required to cool down the ozone layer, which would mean countless jet aircraft would be sharing the sky in the presence of numerous ice spraying balloons.

Death Valley in eastern California was once a thriving lake with biodiversity. Today, it is a barren desert. A solution to combat the problem of rising sea levels has been introduced that suggests flooding deserts like Death Valley in order to protect coastal communities.

This could be a win-win situation as it would help cities in risk of flooding due to the rising sea levels and at the same time, it would help deserts become tropical and thrive with flora and fauna. That said, displacing this much amount of water from the coasts to fill deserts requires a lot of strategizing, funds and resources.

According to glaciologist Dr. Jason Box, in order to slow down the melting of ice caps in Greenland, an amazing solution could be to cover the entire country with white blankets. This would reflect the rays of the sun away from the ice, and since 80% of Greenland is covered with ice, this solution could potentially help a great deal in managing the atmospheric temperatures.

That said, it would require a lot of monitoring and maintenance. In addition to that, if the waters of the Arctic sea begin warming like the waters of Antarctica, the glaciers would melt nonetheless, with or without the blankets.

According to research, a space sunshade could potentially reflect the incoming sunlight in order to keep the temperatures cool on Earth. Research also suggests that 800,000 small spacecraft can be employed to create a long shield of 100,000 kilometers in outer space that could last for at least half a century.

Although this would go a long way to cooling the temperatures throughout the globe, it would cost an exorbitant amount of money, equivalent to at least 0.5% of the GDP of the entire world. This could lead to less sunlight and mass hunger at the very least.

6. Fill the Oceans with Iron

Filling the oceans with iron can help in the growth of phytoplankton like algae that can help in the absorption of carbon dioxide that these organisms need for their growth. This could improve the health of the atmosphere and the oceans.

That said, introducing iron into the water bodies also results in an increase in carbon emissions in the atmosphere. This could harm not only water bodies but aquatic food chains too.

7. Dispense Sulfuric Acid in The Sky 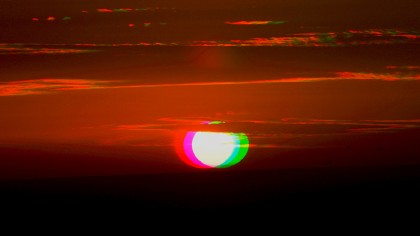 In this last geoengineering solution, jets would dispense sulfuric acid in the highest levels of the stratosphere to form aerosols when combined with water vapor. This would help in reflecting sunlight away from the Earth and prevent further warming.

However, blocking too much sunlight can also lead to mass hunger due to less yield and also, large amounts of sulfuric acid in the sky would also be toxic. As is evident, all these geoengineering solutions do have their share of advantages for the environment and the natural world.

However, if they do not work out as predicted or as planned, they can prove to be perilous for the planet in the long run.

5 Ways That AI Is Helping Artists Be More Creative