3D printing is a new technology that has a host of applications in some of the largest industries in the world.

You have probably spent the past couple weeks learning all about the cool things that you can 3D print at home and what 3D printers you should be using. However, you are not the only person looking to get into additive manufacturing.

From gaming companies to the medical field, 3D printing has spread its web of innovation, revolutionizing the way people design, prototype, and build products. Though just about any industry can use 3D printing, there are industries that are sure to gain the most.

According to the International Data Corporation or the IDC, the 3D printing market is expected to bring in nearly $35 billion in revenue by 2020 compared to $16 billion just four years ago. Today you are going to take a brief look at the industries expected to evolve thanks to 3D printing and what roles additive manufacturing will be playing.

But first, let’s make sure you can wrap your head around the process.

What is 3D printing?

From plastics to metals, companies have used 3D printing to create replacement parts, reinforce products and even create new ones. Here are the industries that are currently being disrupted by the 3D printing industry.

As probably one of the least expected industries to be changed by 3D printing, fashion has tapped into the power of this technology to redefine the clothing and accessories that you wear on a daily basis. Additive manufacturing will impact both the designers and the consumers that they design for across the world. 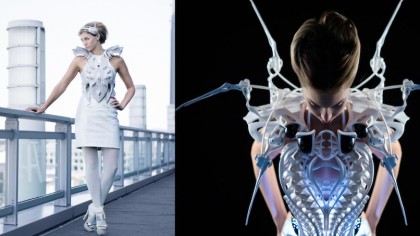 First and foremost fashion designers are using this technology to test and prototype their designs, a process that originally was expensive and inaccessible for those just entering the fashion world.

High fashion designers like Anouk Wipprecht and Iris Van Herpen have created entire collections of wearable clothing using 3D printers. While on the commercial side of things, footwear companies like Adidas have incorporated 3D printing in their latest sneakers.

There could come a time in the near future where designers allow you to 3D print clothing and shoes directly from home by simply purchasing their design online and uploading them to a printer inside your home.

Multiple aspects of the Healthcare industry are expected to benefit from 3D printing. Like something out of a science fiction film, startups like MBC Biolabs have developed ways to actually 3D print functioning organs, while the University of Toronto researchers have created a way to 3D print skin. Even some companies are already using additive technology to create prosthetics.

Aprecia Pharmaceuticals has created the world’s first FDA 3D printed drug, that could help encourage young children suffering from chronic diseases take medication and that could assist doctors with prescribing the exact amount of medication to patients.

Many people overlook the benefits of 3D printing in the world of research and development. Yet, the cost of R&D is usually the most expensive part of a company’s operations dramatically impacting the bottom line. As seen in the examples above, 3D printing allows companies to test and prototype much faster for a fraction of the cost.

Though the technology is readily available, 3D printing food may become more common than you think. Though this might not sound as appetizing as you may like, 3D printing food is a viable way to create meals in areas where food might not be accessible, like space or even underwater.

Some chefs are even using 3D printing to elevate the restaurant experience, creating mesmerizing designs that sometimes look just too good to eat. While astronauts have already found ways to 3D print food in space.

The most obvious application of 3D printing technology to architecture takes form in the early design process. Just like the rise of VR technology among design agencies, 3D technology allows designers to quickly bring models to life, test ideas, and pitch concepts to clients; a part of the design process that most architects believe is the most difficult.

However, innovation and disruption do not end there. Companies like PassivDom have created a process that allows homes to be built in just under 8 hours. With their own robot, they can create a luxurious 410 square foot home, that could easily rival some of your apartments.

The world of construction has a lot to gain from additive manufacturing, creating projects that could benefit a lot of people. Texas start-up, ICON,  is currently working on a project that could end homelessness using 3D printing home technology.

3D printing will change the way humans travel and could even extend the duration of missions to the International Space Station and plans to Mars.

Whether a component on a ship was damaged during a mission or an astronaut researchers needs a new tool, 3D printing an object is far better than either carrying extra weight on a mission or requesting the needed tool, thousands of miles away.