Einstein left an indelible mark on more than just physics. Here are other references throughout pop culture to his legacy and work.

In addition to it being National Pi Day, it's also the birthday of the esteemed physicist Albert Einstein.

In honor of Albert Einstein, we pulled together our favorite moments of Einstein-related pop culture fun. But before we get into the list, let's do a quick recap as to why Einstein managed to find his way into the mainstream.

Born on March 14 in 1879, Einstein grew up in Munich, Germany. The family later moved to Italy. Einstein then moved to Switzerland to continue his formal schooling. He became a Swiss citizen in 1901 (the same year he earned his diploma), and he earned his doctorate in 1905.

In that 1905 paper, Einstein proposed his famous equation: E = MC2. That equation laid out a new understanding of the matter/energy relationship where the energy of a body is equal to the mass of that body multiplied by the speed of light squared. 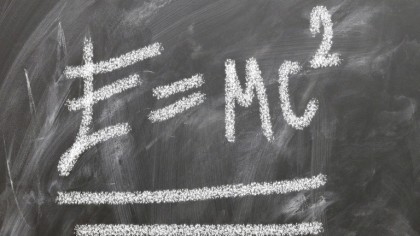 In 1921, Einstein was awarded the Nobel Prize in Physics for his study of the photoelectric effect. During the outbreak of the Second World War, Einstein immigrated to the United States after being targeted by Hitler's administration. His work also became crucial in the development of the atomic bomb later during the war.

Einstein was outspoken, eloquent, and had passions reaching far beyond the confines of the scientific community. He played the violin. He was well-versed in both classic and popular literature of the time. This could be partially why Einstein's persona and legacy seem so applicable to a variety of situations, movements, and movies.

His life has been adapted a number of times on-screen, and his iconic likeness has been recreated throughout art. Here are just a few of Einstein's most popular pop-ups in culture:

The movie starred Andy Serkis as Einstein and David Tennant as Eddington and dove into the social implications of British Eddington corresponding with then-German-residing Einstein.

It wasn't a very long scene or in-depth at all, but Rick and Morty fans will immediately remember monsters beating up Einstein who they mistake for Rick.

Was it hilarious? You bet. Iconic? Definitely. And even getting beat up by an alien race wasn't enough to stop cartoon Einstein from continuing to push the boundaries of our knowledge of time and space. Animated Einstein hops back up and continues his work.

3. Back to the Future

The references run deeper than Doc Brown's dog being named Einstein. Christopher Lloyd has hinted throughout his time in the franchise that Albert Einstein was a big inspiration to the character.

And as for the signature hair? Lloyd said he pulled the idea from both Einstein's iconic look and mixed it with conductor Leopold Stokowski's bright white hair.

4. Einstein on the Beach

In true Philip Glass style, the composer told NPR in 2013 that the audience filled in the blanks of the plot. According to Glass and playwright Robert Wilson, Einstein wasn't the first choice for the opera's namesake. It went from Hitler to Gandhi before landing on the famous physicist.

"And then [Wilson] said, "'What about Einstein?' Well, Einstein had been a great hero of mine since I had been a child, so I immediately said, 'That's great! That's the idea,'" recalled Glass.

Academy Award-winner Geoffry Rush portrayed the 'genius' researcher in the most recent docu-series about Einstein's life.

National Geographic aired the scripted show that explored Einstein's both private and professional lives. The show even created its own chatbot in the style of Einstein, giving Facebook users the opportunity to talk with the genius himself.

Einstein made his way onto not one but two episodes of Star Trek: The Next Generation. Lt. Commander Data programmed Einstein, Newton, and Stephen Hawking all into the holodeck's interface, meaning that the Enterprise was handily equipped with some of history's best scientists.

This might be a fitting ending for an 'epic' list. In 2011, YouTube creators Nice Peter and EpicLloyd -- the duo behind Epic Rap Battles of History -- had the wiry-haired physicist face off against Stephen Hawking. The resulting video went viral. As of this writing, the video has been viewed nearly 116 million times.

[Editorial note: this list was compiled just minutes before hearing about the death of Hawking. The writer finds it fitting that two such brilliant minds would be remembered on the same day.]