A list of some of the greatest mechanical engineering wonders that you rarely see or think about despite their awesomeness. 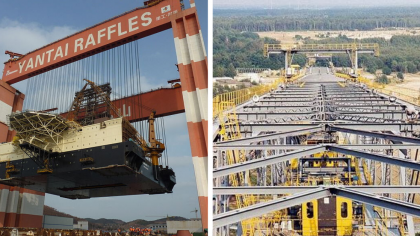 From the small water tap in our homes to the complex machines used in building monuments, the principles of mechanical engineering are applied in almost everything that surrounds us.

Each mechanical device is a wonder in itself, utilizing the principles of force, motion, and energy to make our lives easier. However, the word “marvel” is best suited to things that often make you wonder, “How did they do that?”

Here’s a list of 7 such marvels of mechanical engineering:

Bagger 288 is one of the world’s largest and heaviest moving machines which can move about 240,000 cubic meters of soil in a single day. The machine took ten years to complete, from design to assembling with a total cost of $100 million.

This enormous excavator is as tall as NY’s Statue of Liberty (96 meters), 225 meters long and weighs about 13500 tons. It was built in 1978 by the Krupp Company in Germany.

This gigantic machine was built to remove the waste before the coal mining at Germany’s Hambach strip-mine, and it did the work till 2001. In February 2001, it was moved to TagebauGrzweiler, a surface mine in North-Rhine Westphalia, Germany.

Altogether, it can do the work of 40,000 workers per day. A single bucket wheel has18 buckets with a diameter of 22 meters and a four 840kW motor drives each wheel.

Thick cables are used to provide the power of 30,000 volts to the bagger.

The bagger has a cab from where all the movements can be controlled, a slewing gear which enables the rotation of the machine and movement of bucket wheel into the desired position along with 23 service cranes to replace any damaged parts.

The machine can move at a speed of 2 to 10 meters per minute and rests on a total of 12 caterpillar tracks. The surface area of these tracks is very large, about 12 feet due to which the ground pressure is reduced extensively.

Named after the 41st President of the United States, the USS GEORGE H.W. BUSH (CVN-77) was built by the Northrop Grumman Newport News and was commissioned in 2009. CVN-77 is the last one among Nimitz Class aircraft carriers which are nuclear powered.

The total cost of building the ship was $6.2 billion. This giant carries two nuclear reactors which can power the ship for more than 20 years without refueling at all.

The CVN’S maximum speed is recorded to be more than 30 knots. She has a bulbous bow design which reduces the drag by providing better hull efficiency and better buoyancy to the forward portion of the carrier.

The aircraft carrier stretches to about1,092 feet and has a flight deck which is 76.8m wide and 332.9m long. She carries a total of 6000 crew members and accommodates more than 60 aircraft.

Including the stores, fuel, ammunition, and water it has a full load displacement of about 102,000t.

3. Nano Engine – Engine That Works On A Single Atom

Scientists at the University of Mainz in Germany were successful in building the smallest working engine ever created. The engine is powered by single electrically-charged calcium atom and is claimed to have a similar thermodynamic efficiency (when scaled to size) of an average automobile engine.

The nano engine follows the same thermodynamic cycle that occurs in a normal car engine. However, in this case, the power generated is converted into a vibration of an atom which serves as a mechanical motion.

The scientists in their experiment were also able to observe a power output of 10-22 watts with an efficiency of around 0.3 percent.

While there may not be any direct application of the single-atom engine, with few modifications, this tiny engine can lead to more opportunities in studying small quantum machines.

4. The Parker Solar Probe –The Fastest-EverSpacecraft

Named after an American astrophysicist Eugene Parker,theParker Solar Probe was launched on 12th August 2018. The spacecraft which was launched aboard the Delta IV Heavy rocket is a result of 8 years of hard work of several engineers and scientists, a total cost of $1.5 billion and is expected to become the fastest-ever spacecraft by December 2024.

The probe is specifically designed to travel through the sun’s atmosphere, also called the corona and study the area that we previously knew only in glimpses during eclipses. This historic mission will provide key research data about solar anomalies to find answers about important solar mysteries.

Weighing about 685 kilograms, the spacecraft is as small as a car. On its journey, the Parker Solar Probe will be the first ever spacecraft to provide a close-up view of our Sun while facing extreme temperatures of about 1,4000C. To be able to achieve such a feat, the probe is fitted with a massive 2.5-meter wide heat shield which will help in keeping the spacecraft cool as it gets closer to the Sun.

The heat shield comprises of an 11 cm thick carbon foam sandwiched between superheated carbon-carbon composite panels. The sun-facing side of the heat shield is painted with a specially formulated white coating which will reflect most of the sun rays.

In addition, the probe also has a solar array which will provide the necessary power to the onboard systems by using the solar energy. A separate cooling system is integrated to keep the solar panels cool at all times.

5. Chandra X-ray Observatory – The Most Powerful Telescope in Existence

The Chandra X-ray Observatory which was launched in 1999 by NASA is the most powerful and largest (at 45 feet) x-ray telescope in the world. It was launched to capture images of high energy regions (black holes, dark matter, supernovas,etc.) of the universe for scientists and researchers.

The Chandra is named after the famous Subrahmanyan Chandrasekhar, the Nobel Prize winner and is one of the 4 Great Observatories launched by NASA.

This mechanical marvel has high-resolution mirrors which enables it to pick up 100 times fainter x-ray regions than its predecessors could. This was made possible by the scientists and engineers at Raytheon Optical Systems in Danbury, Connecticut who polished and ground these pairs of mirrors to the smoothness of a few atoms.

The Chandra telescope system orbits around the earth at a height which is 200 times more than NASA’s Hubble space telescope.

6. RoboFly – A Tiny Flying Robot That Can Operate Wirelessly

The RoboFly is no more a technology that you would only see in Hollywood movies. Engineers from the University of Washington have designed a robotic fly which is half the size of a clip and weighs only one-tenth of a gram.

The flying robot operates on its own and does not require any wires to achieve the flight. This is made possible through a photovoltaic cell, which is attached above the RoboFly and converts the remotely pointed invisible laser beam to electricity.

In addition, the fly is also equipped with a microcontroller which acts as a brain to help the RoboFly gain control over its own wings. It essentially tells the wing muscles when to flap hard and when not to.

While the current RoboFly is still limited in terms of capabilities, researchers plan to develop an advanced version with integrated tiny batteries, advanced brains and sensor systems which will help the fly to navigate and perform tasks on their own.

The robotic fly, once completely developed, will have significant potential in areas of search and rescue missions, surveillance, climate monitoring and more.

With a massive weight of 360 tonnes, Belaz 75710 is indeed the world’s largest dump truck with a hauling capacity of 450 tonnes. To achieve such a feat, the giant dump truck consists of a pair of eight weels, each capable of supporting 102 tonnes.

The gigantic truck is powered by two 16-cylinder diesel engines that churn out an incredible 3430 kW of horsepower with a top speed of 64 km/h. Built by the engineers of a Belarusian company, this mechanical engineering marvel comes with a price tag of about $6 million.