Without these inventions, our modern life activities would never have been possible.

Electrical engineering is one of the most revered brands of engineering that deals with electricity, its study, development, and application. Think of a world without electricity, where you may not even connect through these words, because the device we used to write this piece and the device you use to consume runs on electricity.

These advancements came as a result of certain inventions and developments in the field of electrical engineering. These inventions are nothing less than marvels and showcase human engineering at its best.

We cannot begin the list without mentioning the most important discovery of them all – Alternating Current. The idea for AC was first conceived by Nikola Tesla, who presented the paper on the same in 1888.

We all use AC current on a daily basis as it is directly provided to our homes using electrical lines. AC currents are far more efficient than DC (Direct Current) when it comes to long distance travel and made electricity available for all.

The appliances in our homes that use DC to run converts the AC current coming from the socket to work. The AC made it possible for long distance electrification and brought in significant cost savings while doing so, something that DC failed to achieve.

Not to be confused with the movie, but equally enthralling in an engineering sense, transformers cannot be left out when we are on the subject of electrical marvels. The transformers have the unique ability to transfer electrical energy from one circuit to another without them being in contact with each other by the phenomenon of electrical induction.

Without transformers, long distance electrification would not be possible. In essence, they are the reason why our homes are kept lit and warm even when the electricity we use is generated hundreds of miles away.

For the developing world, the uses of electricity weren’t just the lighting bulb, but helping industries to grow and prosper at a very fast pace. Electric motors were the catalysts used in for such rapid development and still proves their relevance by being the prime movers of electric vehicles (DC motors).

Electric motors convert electrical energy into mechanical energy. This meant that human labor can be replaced with more powerful and effective means that could speed up production and maintain productivity for a higher period of time.

The electric motor was so effective that it single-handedly replaced steam engines from factories and other major industries. The DC motor was perfected by Frank Julian in 1886.

The AC motor was invented by the master inventor himself, Nikola Tesla in 1887.

Even though Solar Energy took forefront later in the 2000s, the principle behind it was put forward back in 1839 when Edmond Becquerel discovered the photovoltaic effect.

Solar cells are now being used extensively around the world. The Tengger Desert Solar Plant is currently the world’s largest solar plant. It can put out an output of 1547 MW at optimum conditions.

With further innovations in the field, we can expect solar panels getting cheaper and happing much more widened acceptance around the world. We can already see this coming into fruition as companies like Tesla are in the process of building solar tiles that can be installed on your rooftops without standing out like the bulky ones we have today.

Electricity can be generated using various methods, and one of the most common methods is by using a Hydro-electric generator. Even though nuclear plants create electrical energy in a far higher magnitude, the byproducts and the actual process itself are too dangerous.

The hydroelectric power plants do not create any waste as a byproduct and use a renewable source for making electrical energy. The first hydroelectric generator that was used for commercial use began its operation in 1882 at Fox River, Wisconsin.

The first ever hydroelectric turner was used to light up a lamp in Cragside country house in Northumberland, England in the year 1878.

The Three Gorges Dam uses hydroelectric power generation as its working principle, but the reason why it has its own spot on the list is that of its sheer scale and the engineering that went into building it.

The Three Gorges Dam is the world’s largest Power Station which is capable of producing 22,500 MW of energy.

The Dam is built on the Yangtze River in China and spans across 2335 meters long. The Dam was also built with increasing China’s shipping capacity in mind. The Construction was completed on July 4, 2012, and the dam recovered its full cost by the end of 2013!

The Dam is so big that by trapping an enormous amount of water on one side, it slowed down earth’s rotation by changing the earth’s moment of inertia.

The list will not be complete without mentioning the electric incandescent bulb. It was invented by Edison and his team of engineers. The light bulb hit markets in 1880 and revolutionized the way we spend our nights. 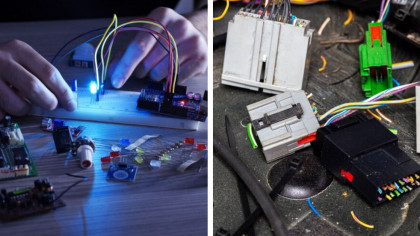 12 Electrical Engineering Projects That Will Impress Your Teachers

Nowadays, incandescent bulbs are being replaced by highly efficient LED bulbs, but it is the electric bulb that started it all!

Electricity has certainly changed the way we live and even how we interact with people. We take many of the technologies that we use on a daily basis for granted.