Some of the world's most important inventions were developed during WWII.

World War II can be said to have changed the direction of human history. The deadliest military conflict in history, it is estimated that between 1939-1945, as many as 75 million people may have lost their lives. Yet, despite the devastation wrought, the war also acted like a catalyst, bringing forth a wide range of innovations and inventions.

The National WWII Museum in the United States describes this period by stating, "There's an old saying that necessity is the mother of invention. That sentiment was definitely the case during World War II, a massive global conflict that presented the United States with a variety of tactical and logistical challenges. At every turn, Americans seemed to need more of everything—more supplies, bigger bombs, faster airplanes, better medical treatments, and more precise communications." 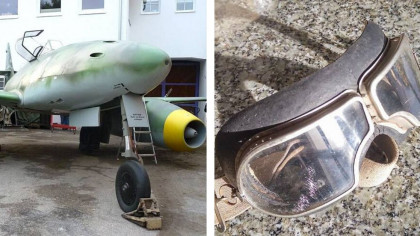 "In response, scientists, technicians, and inventors supplied a steady stream of new products that helped make victory possible. Many of these innovations transformed the very nature of warfare for future generations and had a significant impact on civilians' lives as well."

Aside from the obvious geopolitical changes which can still be felt, some of the inventions that came out of WWII are still being used today, including technologies that have made their way into our households and have taken us to the moon. In this article, we are going to look at some of the most important technologies from WWII and how their invention still affects us today.

First up on our list is Radio Detection And Ranging or, as you know, it, RADAR. Though the ideas of using radio waves to detect objects, as well as their speed and distance, was introduced long before the war, the first radar navigation system did not appear until just before WWII.

In 1927, meteorologist Sir Robert Watson Watt, the grandson of the famous inventor, James Watt, helped to form Britain's Radio Research Station. As war clouds gathered in the 1930s,  the likelihood of air raids and the threat of invasion drove a major effort in applying the use of radio waves to defense.

By the beginning of the Battle of Britain, the government had already developed a series of radar stations along the coast, which allowed them to monitor and detect German air attacks and to give early warning of air raids. To this day, radar is still used across the world.

During WWII, Germany had developed an encrypted communications system, called `Enigma, which many people believed to be unbreakable. The machine contained a series of interchangeable rotors, which rotated every time a key was pressed, so that the cipher changed continuously. The machine also had a plug board where pairs of letters were transposed. Combining these two systems resulted in 103 sextillion possible settings to choose from, which the Germans believed made Enigma unbreakable.

However, after receiving intelligence from Poland that suggested it was possible to exploit weaknesses in the coding system to break the Enigma code, the U.K. put together a group of code-breakers, led by Alan Turing.

Turing developed a machine, called a Bombe, which resembled a modern computer, except that it was 7 ft wide, 6ft 6in tall, and weighed a ton. Literally. The Bombe was essentially an electromechanical machine made up of 36 different Enigma machines, each one containing the exact internal wiring of the German device.

Using the machines, Turing and his team managed to decipher up to 3,000 German messages a day.  Although the Turing machine had little to do with the eventual development of AI, the experience did help Turing to refine and develop some of his earlier ideas for machine intelligence. In 1948, Turing introduced many of the central concepts of AI in a report entitled “Intelligent Machinery," which was never published. Many of the ideas Turing came up with would later be put into practice by others in the development of AI.

3. The importance of pressurized cabins.

If you have ever flown in an airplane, you may have been aware that the cabin was pressurized. Airplane cabins are pressurized to protect passengers and crew from hypoxia, a lack of oxygen at high altitudes. To prevent hypoxia, airplanes must pump air into the cabin to mimic the 14.7 pounds per square of pressure found at sea level.

The first airliner with a pressurized cabin was the Boeing 307 Stratoliner, which was built in 1938, but only ten were produced. The planes initially used in World War II were not pressurized, and pilots and crew relied on oxygen masks. As bombers became larger and required the crew to move around the cabin, a need emerged for cabin pressurization.

The first bomber with cabin pressurization was the Boeing B-29 Superfortress, which also included the first-ever mass-produced system designed for regulating air pressure.

4. Penicillin changed the world for the better.

The world before antibiotics was a more dangerous place, a place where a simple scratch, never mind a bullet wound, could lead to death from infection. While the antibiotic penicillin was developed in the 1930s by Alexander Fleming, Howard Florey, and Ernst Chain, the drug first came into widespread practical use during WWII.

In August 1940, the trio of Oxford researchers published results from their first experiments, showing that penicillin could effectively combat a variety of pathogens, including the bacteria that cause gangrene.

At that time, the Battle of Britain was already raging in the skies over Britain, and the researchers were so concerned about an imminent German invasion that they rubbed Penicillium notatum spores into the fabric of their jackets so that if forced to destroy their work and evacuate, they would still have the raw material to start up again. But turning the bacterium into medicine was slow going.

Then, in July 1941, Florey and Heatley traveled to the United States in search of help. Researchers there recognized the importance of the team’s work, and developed a way to mass-produced the drug-using submerged fermentation in huge vats. Soon, more than 20 companies were working on producing penicillin and in 1944, Allied soldiers carried vials of penicillin with them onto the beaches at Normandy.

5. The underappreciated aerosol can got its start in WWII.

The first metal aerosol spray cans were being tested as early as 1862, but these were far too bulky to be commercially successful. In 1927, Norwegian engineer Erik Rotheim patented the first aerosol can with a valve that could hold and dispense products.

During World War II, the U.S. government-funded research into a way that US service members in the Pacific Theater could use a portable system to spray pesticide on malaria-carrying bugs. In 1943, the Department of Agriculture researchers, Lyle Goodhue and William Sullivan developed a small aerosol that can be pressurized with liquefied gas (a fluorocarbon) in 1943. It was this design that made products like hair spray, along with the destruction of the ozone, possible.

Wernher von Braun was a German rocket scientist who worked for the Nazis until making his way to the US at the end of the war. He has been dubbed The Father of the Rocket, and his research helped to lay the foundations for the U.S. space program. However, before this, he was responsible for the  "Vergeltungswaffe 2" or V2 missiles, the world's first long-range ballistic missiles.

As mentioned in one of our articles, "Wernher Von Braun's five first-stage engines are still the most powerful single-chamber liquid-fueled rocket engines ever made." Braun was eventually awarded the prestigious National Medal of Science.

7. The atomic bomb and nuclear energy.

It is no secret that the atomic bomb shaped the outcome of the war, having rippling effects across history. Led by a host of top scientists, like Niels Bohr, Emilio Serge, and Robert Oppenheimer, the Manhattan Project brought forth the first test of a nuclear bomb on July 16, 1945. The science behind the bomb would eventually lead to a host of innovations in the field of nuclear energy.

For more about history and innovation, be sure to stop here and read the articles here.

9+ Inventions That You Probably Didn't Know Came from the 1970s

UK Entrepreneur Makes Diamonds Out of CO2 in a World First