7 Tire Innovations That Will Have Your Mind Reeling

These innovations and future model concepts from tire giants and one space agency are bound to revolutionize the industry. Now we just have to wait for the prototypes to hit the market.

Tires are true engineering marvels that not only make our vehicles more efficient, they greatly improve their safety too. 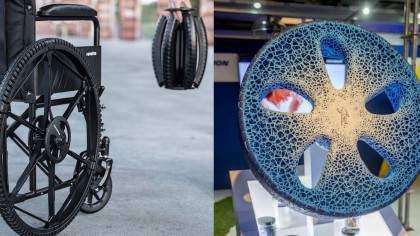 Tires have a long history, almost as long as the wheel's, and have definitely come a long way since their early days as mere bands of metal fitted around wooden wheels.

However, nothing compares to the recent developments in tire innovations, particularly those being put forward as future concept models by some of the industry's biggest players and even a space agency.

Here are seven of our favorite most impressive recent tire advancements and upcoming prototypes that will make the first pneumatic tire patent of 1847 seem like a minor event.

1. The tire that charges your car while you drive

In 2015, tire giant Goodyear unveiled their BH03 concept and it took the car world by storm. "This tire generates electricity through the action of materials in the tire that capture and transform the energy created by heat when it flexes as it rolls during normal driving conditions," read the firm's release.

The tires were obviously targeting electric vehicles (EV) and were meant to increase and support their generation capabilities and rolling resistance. After much hype, the concept disappeared without any updates so far. However, we are still hoping it will be revisited especially with the EV industry constantly progressing.

Unveiled by Hankook three years ago, this concept was set to revolutionize the industry by removing the need for air pressure. Hakook's research and development teams put significant work into ensuring their non-pneumatic prototype could perform as well, if not better, than conventional tires.

"The company put the iFlex through a serious of rigorous tests designed to push the tires to their limits in five categories: durability, hardness, stability, slalom (zigzag) and speed. In the speed test, the electric car equipped with iFlex tires reached 130km/h," read the firm's release.

Yes, that seems like a lot of features for just one tire and yet Michelin's Vision concept model actually even includes more advancements. This elaborate tire, dubbed ‘tweel,’ would not only be printed from bio-sourced materials into a design that mimics the natural cellular structures of coral ensuring it never blows out, it would also be smart, enabling communication with its user, and rechargeable.

"Now imagine that you don't have to worry anymore about keeping your loved ones safe when you travel, because road conditions and bad weather don't matter anymore: your tread instantly adjusts to your driving conditions, whenever necessary, using just the right amount of materials. A tread that can be modified and replenished at will, without wasting any resources, time or money, and which protects the environment for the generations to come..." reads the company's announcement and it definitely has us dreaming!

4.  The moss-covered tire that cleans the air

Sounds too good to be true right? Yet Goodyear claims that their latest new concept tire 'Oxygene', unveiled just mere months ago, can use photosynthesis to absorb carbon dioxide and release oxygen.

“By contributing in this way to cleaner air generation, the tire could help enhance quality of life and health for city-dwellers," said at the time Chris Delaney, President of Goodyear Europe, Middle East and Africa.

Equipped with living moss growing within its sidewall, this super eco-friendly tire would also absorb moisture from the road and use the power generated from photosynthesis to power its artificial intelligence electronics. Whoever thought moss could be used so efficiently?

It seems that Goodyear's research and development team never tires of innovating. The third on our list from this industry giant was just too good to be ignored.

Unveiled by the company last year in Geneva, the Eagle 360 Urban would be the first tire to be powered by artificial intelligence (AI) and would be given an actual "brain." Featuring a truly unique spherical design, this marvel of innovation would be equipped with high-tech features that would allow it to "sense, decide, transform and interact."

6. The tire made for space colonization

Developed by NASA, obviously, these superelastic tires are built to withstand Mars' rocky terrains. Best of all, these sturdy tires engineered for space use also make for viable alternatives to pneumatic tires right here on Earth.

"The novel use of shape memory alloys capable of undergoing high strain as load bearing components, instead of typical elastic materials, results in a tire that can withstand excessive deformation without permanent damage. Using shape memory alloy as radial stiffening elements can also increase the load carrying capacity of the tire," reads the space agency's statement.

7. The tire that autonomously adapts to weather conditions

This model may not be as out there as some of the rest on this list but it is a long time coming. After all, what more important task does a tire have then tackling road conditions under all weather events?

If you loved these concepts, rest assured this is just the beginning of the tire's evolution. Researchers from tire firms, to space agencies, to military organizations, are constantly searching for ways to upgrade this classic vehicle part. So, it is safe to say the best is surely yet to come!