7 Ways Electric Vehicles Are Set to Change the Future

With electric vehicle production and uptake set to sky rocket over the next decade or so, what might the near-future look like?

Electric vehicles are set to oust combustion engines out of its market dominance over the next decade or so. As prices drop and performance improves, they will become more and more economically viable for consumers.

But there will need to be a few changes needed prior to the mass roll-out of this technology around the world.

From better infrastructure to support them to cheaper moto-repairs and fuel costs, here are some ways EVs are set to change the future.

1. Will infrastructure be able to support them?

As Electrical Vehicles are set to grow in numbers around the world, can existing energy grids keep up? In the United Kingdom, for example, its energy grid will likely be severely stretched to supply the growing numbers of Evs on their roads.

It has been estimated that an extra 8GW of power generation will be required to meet the potential growth in demand for power. This will require significant investment in upgrades, including but not limited to, innovative power load balancing.

But not just that. If the mass replacement for combustion engines to low-emission alternatives is to be achieved, electrical generation will need a higher percentage of renewables and other non-carbon fuel alternatives.

But this isn't the be all and end all. Energy is currently needed on demand, and renewable sources are notoriously unpredictable.

2. Future households could generate their own power for their electrical vehicles

Perhaps one solution to point 1 above is for consumers to become "prosumers". Instead of relying on grid-supplied electricity, we might see an increased uptake in self-generation of electricity instead.

Each electric vehicle owner's home will have an electrical generation and storage device to hand. Ideally, these storage systems will hold enough charge to power the average home for a few days.

Perhaps it could be stored in their garage or basement? Just like today, "prosumers" could sell back any excess power to the grid after they've stored enough for their needs.

Or, just like today, their car batteries could be charged from the grid (when in excess supply) but supply back when demand is high.

In this sense, today's tendency for energy supply to be a one-way street will be completely turned on its head. Power will increasingly be supplied from many different sources from renewables to domestic micro-producers.

Currently, smart meters are able to provide insight into a consumer consumption of energy. If electric vehicles are to become more and more popular, the next generation of them will need them to become even more sophisticated.

So-called second-generation smart meters, which are currently available, have the ability to not only to measure consumption but also record electricity generation from a "prosumer."

They can also provide real-time information on energy pricing movements.

Many current Building Management Systems have sensors and software capable of modeling a building's energy requirements from known parameters about past performance and use that information to better predict the energy needs for the current day.

A similar system might be possible using smart meters for a household's energy needs per day, during working hours or evenings, especially for charging their vehicles.

This information will be invaluable to ascertain how much energy the household will need, at what times, and ensure it is available.

Any excess energy, from battery-stored sources, for example, could then be sold back to the grid during peak times.

This will, of course, require significant investment in two-way grids, microgeneration, and smart meter technology to achieve.

An electric vehicle, on the other hand, usually has less than 20. Not only they are less mechanically complex, but there is less likelihood of mechanical failure that will need repairs or replacement throughout the vehicle's lifetime.

The top 10 car repairs from 2015 show some exciting information about this. On the list, only one of the common faults was from an electric vehicle (tightening or replacing a fuel cap).

This also happened to be one of the cheapest at around $15 on average.

By way of example, the top three most common repairs were the replacement of an oxygen sensor ($249), replacing a catalytic converter ($1,153), and replacing ignition coil(s) and spark plug(s) ($390).

Whilst electric vehicles are relatively expensive today; it seems they are a wise long term investment. Tom Raftery reported in Forbes that "contrary to what many believe, the batteries in electric vehicles don’t degrade over time (or over miles/kilometers driven either).

This is a graph of the battery capacity of Tesla Model S/X vehicles, and it shows that after driving 270,000km (roughly 168,000 miles), the batteries still had 91% of their original capacity."

This means they lose around 1% of their capacity every 30,000 km or so. The upfront cost of an EV doesn't seem that bad after all.

But this information is limited to Tesla batteries, but it will only be a matter of time before other manufacturers catch up.

6. China is looking likely to dominate the market

As far as electric vehicle production and sales go, China is currently leagues ahead. By 2020, China is expected to account for somewhere in the order of 60% of global sales, which should drop to 55% by 2025, according to J.P. Morgan.

Their popularity in China has been boosted by the rise of mini-EVs with small battery packs designed specifically for short-range driving (between 100 and 150km).

They also tend to be a lot cheaper than even some combustion engine cars, coming in at around $6,520 a piece.

These forecasts are based on a few assumptions, however. Battery costs are expected to drop over time, more charging facilities will become available, China's current EV subsidies are due to expire in 2021 (this could trigger buying beforehand), and China currently has an EV public transport policy (30% of all new buses must be an EV).

7. You might want to invest in lithium, nickel and aluminum producers

Just like anything that requires raw materials, auto producers and battery makers are sensitive to material costs. Over time the cost of raw materials will increase over time as demand increases. 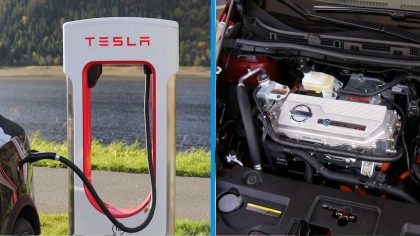 How an Electric Vehicle Works [Infographic]

Unless ultracapacitors replace them altogether of course.

"[If] total battery pack prices drop from $209/kWh to $100/kWh, but raw material costs stay the same, the raw materials cost would account for 56% of the price, substantially higher than today’s 27%.” - JP Morgan.

The composition of batteries are likely to change over time and demand (not to mention price) for certain commodities will certainly be impacted as EV's become more numerous. It is estimated that by 2025, lithium prices will climb by a least 20%.

This is mainly due to the increase in demand from China, as detailed above. Another commodity set to be impacted is Nickel.

The battery sector is set to become the second largest consumer for nickel by the middle of the 2020s. Copper will also increase in demand over this time period for use in charging ports, stations, and ancillary cabling.

Aluminum is another raw material that will get a nice economic boost from the growth in the EV industry.

It might be time to make some wise investments!