7,000 methane-filled ground bubbles were discovered in the Yamalo-Nenets Autonomous District (YANAO) in Siberia. These methane bubbles distort the Yamal Peninsula and Gydan plane producing craters that resemble an opening tip of a volcano. 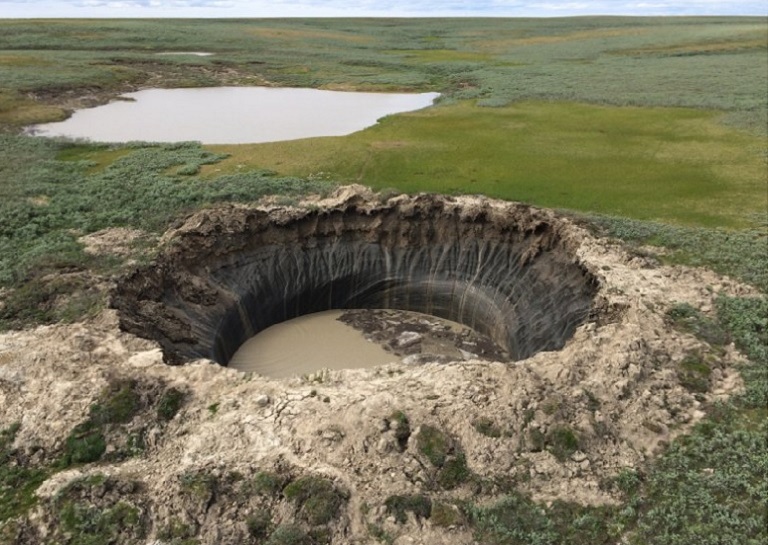 The Ural Branch of the Russian Academy of Science suspects that the significant increase in temperature in the Arctic region causes the permafrost to thaw and release high amounts of methane gas. It is definitely worrying for scientists and environmental advocates that a global temperature spike of around 1.5 degrees Celsius is sufficient enough to cause melting. With the Earth’s constant battle with climate change, it is not a surprise that freaks of nature such as methane bubbles would appear in great quantities on the surface of the planet.

The video below shows you just how bubble-like and ‘wobbly’ these methane holes are and a blunt puncture on the surface releases the gas trapped underneath it.

“Gas rising to the surface through the systems of faults and cracks causes overpressure in the palaeo-permafrost clay layers and breaks through the weakened parts of it, forming the gas springs and blowout craters” explains Vasily Bogoyavlenski from the Russian Academy of Science.

An investigation of these early pingos or sinkholes found that ridiculous amounts of greenhouse gasses are released by the bubbles by around 1,000 times more methane compared to the atmospheric levels and 25 times more carbon dioxide.

This particular region in Siberia belongs to the Cenomian Upper Cretaceous era (approximately 100 million years ago) which is a “regional gas reservoir, is very shallow (500–1,200m) and the biggest gas fields including Bovanenkovo, Urengoy, Yamburg and Zapolyarnoye were discovered in this horizon” said Bogoyavlensky.

A video taken last year at the Yamal region shows the enormous dimensions of one of these methane-filled sinkholes.

Methane is produced simply by the heating of the Earth’s surface and the geological features of the terrain.

The Yamal region is an important energy production region and the occurrence of these methane bubbles could jeopardize the transport and infrastructure system. Because methane is highly flammable, it will be too dangerous to have a few thousands of these locked-gasses lurking underneath oil and gas production plants. It is critical to map out the locations of these gas bubbles in order to determine which spots are dangerous and drill them to release the gas before spontaneously exploding.

Apart from methane being extremely flammable, the high concentrations of carbon dioxides found in these sinkholes are alarming. The world is already going through a rapid global warming transition that is irreversible and the contribution of the 7,000 methane-filled bubbles in just one focused region on the planet flashes red lights on the environmental community. Scientists are still conducting field investigations to better understand the existence of methane bubbles and to determine signs of potential threat.