The Federal Aviation Administration announced today that it will be forming a joint task for with NASA and international regulators to review the software update for the Boeing 737 MAX 8 aircraft as new details from the Ethiopian Airlines flight 302 crash emerge.

In a statement today, the Federal Aviation Administration (FAA) announced the formation of an international task force composed of experts from the FAA, NASA, and regulatory agencies from around the world who will review the proposed software update for the embattled Boeing 737 MAX 8 aircraft.

The task force will be chaired by former National Transportation Safety Board chairman Chris Hart and the FAA says that it will be tasked with reviewing the Maneuver Characteristics Augmentation System’s (MCAS) “design and pilots' interaction with the system, to determine its compliance with all applicable regulations and to identify future enhancements that might be needed.”

Meanwhile, Boeing CEO Dennis Muilenburg rode aboard a 737 MAX 8 test flight on Wednesday that was designed to test certain failure conditions of the aircraft’s MCAS system. Boeing said in a statement that “The flight crew performed different scenarios that exercised various aspects of the software changes to test failure conditions. The software update worked as designed, and the pilots landed safely at Boeing Field."

The MCAS system of the 737 MAX 8 has been under intense scrutiny after the crash of Eathiopian Airlines flight 302 out of Addis Ababa on March 10 following the crash of Lion Air flight 610 out of Jakarta on October 28 of last year. Both planes were relatively new 737 MAX 8 aircraft and both displayed similar flight behavior just prior to the crash, indicating that the MCAS system may have been linked to both crashes. 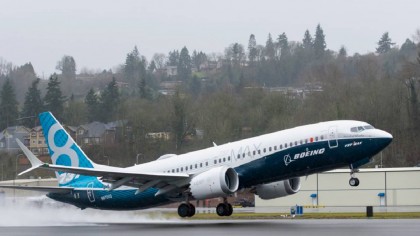 That connection came into sharper focus as sources close to the Ethiopian Airlines crash investigation tell ABC News that a foreign object may have damaged the angle-of-attack sensor on the aircraft, causing it to feed bad data to the MCAS which caused it to engage. The preliminary findings show that the pilot on the Ethiopian Airlines flight used the proper procedure to shut down power to the horizontal stabilizer and used the trim wheel to bring the nose of the plane up.

When the pilots restored power to the horizontal stabilizer however, the MCAS re-engaged and forced the nose of the plane down again and the pilots were unable to pull the plane out of the nosedive that followed. The subsequent crash killed all 157 people on board the aircraft.