747 sized solar plane will attempt to fly around the globe

The team behind the first ever solar-powered aircraft to fly around the globe has announced the follow up, the Solar Impulse 2. The aircraft has a wingspan equivalent to the 747, is just slightly heavier than the average car at 2,300 kg and will attempt to fly full-circle around the globe. 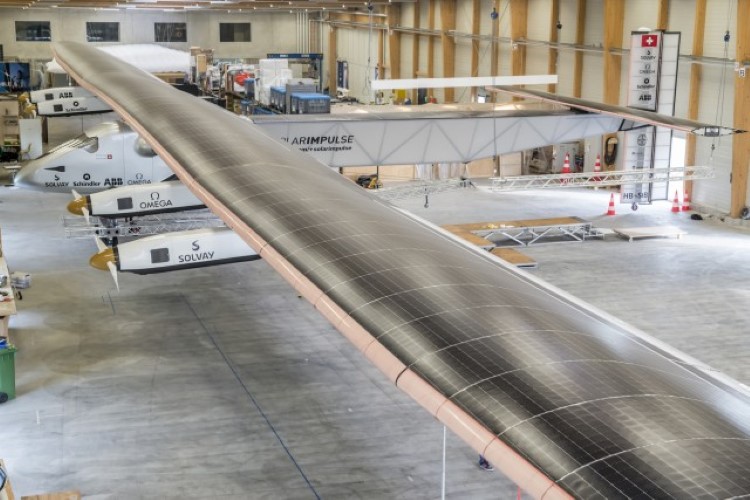 Bertrand Piccard is the head of the Solar Impulse team, credited with being the first man to pilot a balloon around the world, along with engineer and entrepreneur André Borschberg. Both men introduced the new solar aircraft and talked about their plans for the round the globe flight, which they say will take place sometime next year. For a lot of the time they will be flying over land, having the advantage of being able to land if need be - changing pilots for example.

The whole idea behind the journey is to spark up interest in solar flight. The airplane is going to have to go across both the Pacific and Atlantic Oceans, which has been estimated to take around five days. This is down to the fact that the maximum speed the Solar Impulse can travel is 140 km/hour. However it has been said that the plane is going to fly slower than this for most of the time.

A choreographed flight pattern is going to have to be chosen carefully. During the day and under full power it will charge the batteries that power the four 17.5 hp electric motors.  During the night the plane will slowly descend and fly at lower speeds powered solely by the battery storage power. The Solar Impulse 2 will be able to gracefully and gradually glide so that it is closer to the level of the sea and then re-climb the following day.

The cabin of the Solar Impulse 2 needed some redesigning after consideration brought about from the first Solar Impulse. Borschberg said "We went from a bad economy class on the first plane to a good business class seat." This seating can be reconfigured so that it will be used as a bed when folded flat and also as a toilet. The health of the pilots will be tracked at all times thanks to computer monitors and both pilots have gone through self-hypnosis and meditation techniques to help improve their focus, especially due to the degree of monotony involved.

The cabin will also have a supply of oxygen as the aircraft is going to have to climb to a height of about 7km before nightfall.

The front of the aircraft has been designed larger than the one that came before it and this allows storage space for the hardware that is needed. There is a broader body to account for the additional solar panels and the carbon fibre on the wings has been replaced with sheets that weigh less than paper per square metre.

There is a downside to the changes made in the Solar Impulse 2 and this is that the plane will be harder to handle if conditions become turbulent and the craft will also be more fragile when it is on ground. All in all it looks as though some of the most risky parts of the flight around the globe won’t actually be when the plane is in the air, but when it is coming in to land. Test flights are going to begin in just a few weeks and if all goes to plan, the around the globe flight should happen March 2015.