There are many thousands of scientific words out there but some have some very fascinating origins.

The etymology of words in any language or subject can be a fascinating journey through history and human imagination. The following 8 origins of some common science words are prime examples.

The terms we've chosen are some of the funniest sounding and interesting terms that first came to mind. They come from varied scientific fields from Geology to Anatomy, but all are equally fascinating in their derivation.

1. Orogenies can be uplifting

Suits you sir! But in all seriousness, this is a pretty awesome scientific word.

An orogeny is a technical term in Geology that defines a mountain building event. More specifically it refers to the structural deformation of the Earth's crust when two plates collide with one another (usually both thick continental plate).

When this happens continental crust crumples and is pushed upwards (and down into the mantle) to form one or multiple mountain ranges. The entire process is called orogenesis, or mountain building.

This is the main process on Earth for the formation of mountain ranges like the Rockies, Appalachians, and the Himalayas to name but a few.

The word is derived from the ancient Greek Oros meaning "mountain" and genesis obviously meaning "creating or origin". Orogenesis as a term has been used in the past but it became widely used in Geology from 1890 onwards.

2. Can you feel the peristalsis?

For anyone who remembers their high-school Biology lessons, you should already know what this term means. But for those who aren't sure, peristalsis is the involuntary (not consciously controlled) constriction and relaxation of muscles within the intestine or another canal.

This action creates wavelike movements within the canals to push contents forward within it, like feces in the intestine for example.

In fact annelids, like earthworms, use a similar mechanism to actually move around. A process that has also been copied by some modern machinery like the so-called peristaltic pump.

There are also some robots that use the same technique for locomotion.

The term is a compound noun derived from the modern Latin peristallein "wrap around" which in turn is derived from two words of Greek origin. These being peri- "around" and stallein "draw in", "bring together" or "set in order".

You may or may not know what an Ostracod is. But for those who are unfamiliar with these amazing creatures you are about to never forget them.

Ostracods, aka ostracodes, are teeny tiny little crustaceans that are sometimes also called seed shrimp. There are around 70,000 species of them with all but 13,000 now extinct.

They are usually around 1 mm in length but can vary between 0.2 mm and a whopping 30 mm for larger species. Their bodies tend to be flattened with their organs enclosed in two shells (valves) made of chitin or calcium carbonate.

Ostracods can be found all over the world and have been around since the Ordovician period - that's more than 450 million years!

And now the main reason for its inclusion on the list. The most impressive fact about them (and one that most Geology students remember for life) is that a male's sperm is the longest relative to parent body length in the animal kingdom.

You can "take that to the bank", as they say.

The term Ostracod comes from the Greek óstrakon that means "shell" or "tile". In fact, it is the same etymology as the term to ostracize which is was the practice of voting with shells or potsherds to banish someone.

Sorry, we couldn't resist this timeless geological joke. Schist is a type of foliated metamorphic rock that forms under moderate heat and pressure.

It is usually found at convergent plate boundaries where two plates smack into one another, and one is pushed underneath the other. As this happens sedimentary rock (like mudstones, shales etc) are compressed, heated and chemically altered.

The heat and pressure cause the minerals within the source sedimentary rocks to transform into plate-like minerals called micas.

Not only that, but the new minerals re-arrange themselves from an often random order into parallel alignments with their longest axes orientated at 90-degrees to the prevailing direction of compression.

This allows for the rock to be split into thin irregular plates much like slate or phyllite. These two rock types also happen to be intermediary steps towards the formation of Schist as pressure and heat increase over time.

5. Gneiss to meet you

Again we couldn't resist, that will be the last geology pun we promise. Our last entry brings us on Gneiss-ly (yeah we lied) to this one.

As Schists are put under even more heat and pressure they can actually partially melt and recrystallize. This eventually leads to the formation of a rock called Gneiss.

Gneiss is another foliated metamorphic rock that is distinguished by its bands and lenses of varying composite minerals. Some bands within it can contain grains of minerals with interlocking textures.

If you think the word looks a bit German you'd be right. It is thought to derive from the Old High German gneisto meaning "spark". This is owing to the rocks "sparkly" sheen or luster.

Parallax is not just a cool scientific term but a phenomenon we are familiar with on a daily basis. Assuming you have binocular vision that is.

The term is used to define the displacement or difference in apparent position of an object when viewed along two different lines of sight. It is usually measured by the angle or semi-angle of inclination between the two lines of sight.

It can also be used to determine distances as objects closer to the observer will have large apparent shifts than those further away.

You can do this on your own at home by fixing your eyes on one of your fingers and then closing one eye and then the other. By keeping your gaze on your finger you should notice it moves ever so slightly left or right relative to the background.

In fact, it will move more in one direction than the other depending on whether you are left or right eye dominant. Try it out!

Parallax is an important consideration in things like optical instruments such as rifle scopes, binoculars, microscopes, and twin-lens reflex cameras that view objects from slightly different angles. Astrophysicists can also use this principle to measure large distances to planets or stars from Earth.

It is, in fact, a vital component of your, and other predators binocular vision as it is used by your brain for depth perception.

The term has changed little from its Ancient Greek root parallaxis which means, roughly, "a change" and from parallassein "to alternate".

The acetabulum, if you don't know, is any of the cup-shaped, concave cavities in your hip that seat the head of your femur. It is also known as the cotyloid cavity and is an integral part of how your leg keeps stuck to your pelvis.

Rather than being singular structures, they are actually comprised of no less than three of the main bones of your hip. It is made up of the ischium, ilium and, of course, the pubis.

In life, both the acetabulum and head of the femur are coating in articular cartilage. In turn, the connection between the femur and socket are also lubricated by a thin film of synovial fluid.

So effective is this setup at reducing friction between the two structures that it is less than one-tenth that of ice gliding on ice. Quite amazing really when you think about it.

The etymology of the term is actually quite fascinating. The term in and of itself literally means "little vinegar cup" in Latin.

And so its resemblance to a small vinegar cruet of Roman times stuck for all eternity.

8. Talk about the weight of the world on your shoulders

Do you know what the technical name for the first vertebra that supports your head is called? Take a guess?

Yes, that's right, it's called the Atlas, or more commonly C1, vertebrae. No prizes for guessing the origin of the former. 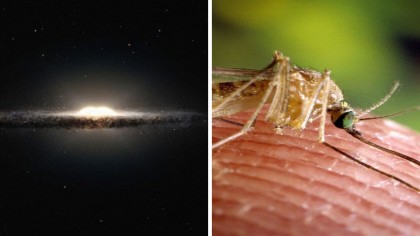 It is, of course, derived from Atlas in Ancient Greek Mythology. This is the chap who supports the entire globe above his head - or in this case the skull.

But despite this, its name is a little misleading if not magnificent. It is but one integral part of the entire vertebral column that ultimately distributes the weight of the head to the body and legs.

However, it is interesting in its own right. The C1 vertebra (and its counterpart the C2 axis) is specialized to allow for a greater range of motion than its lower brothers and sisters.

This is vitally important, as it allows for you to be able to nod and rotate your head with ease.