Algae-powered innovations are already happening in many ways and they hold the key to our sustainable future.

You might recall that green scum left on the neglected fish tank or a smelly pond when you hear about algae. But these tiny green organisms that are often found in wastewater has a great potential to secure our future in many ways. 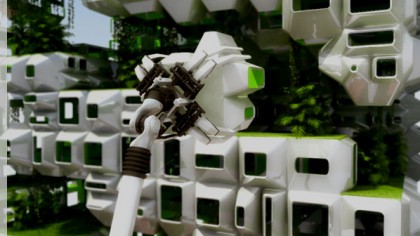 Algae, microalgae in particular, has unique capabilities of producing energy from the sunlight through photosynthesis, just like plants. And, in this process, they consume CO2 from the atmosphere and release oxygen, making it ideal for clearing up the mess created from our fossil fuels. But what is even more interesting with microalgae is its ability to produce fuel. Some of these microorganisms produce oils in order to store the energy and it is possible to use these oil as fuel for our cars and even as an alternative protein source for us! With such a great potential, this symbiotic process is not too far from becoming a reality. Algae-powered innovations are already happening in many ways, and they are worth giving a look to imagine how our future can become more sustainable with the new “green gold”.

This Urban Algae Canopy by ecoLogicStudio was demonstrated in Milan, Italy. It is apparently the world’s first bio-digital canopy that integrates micro-algal cultures along with real-time digital protocols for cultivation using a unique architectural cladding system. The canopy has the capability to produce Oxygen that is equivalent to four hectares of woodland and up to 15kg of biomass per day, which includes 60% of vegetal proteins. Utilizing technology, the canopy is built to control the flow of water through the structure that acts as a medium for the microorganisms. The canopy can adjust the transparency, color and shading potential according to the climate, microalgae and visitor movements with the help of digital control systems.

The handmade wooden motorcycle by Ritsert Mans and Peter Mooij is an excellent example of using as many natural materials as possible including the algae oil that powers it. The energy-producing capabilities of microalgae make it a potential candidate to fuel our vehicles and is already being widely recognized. Algaeus, the plug-in hybrid Toyota Prius in 2009 was just the beginning. In 2011, United Airlines introduced the first algae-powered passenger flight from Chicago to Houston. Japan has already considered developing a fleet of buses powered by algal oil and energy companies are already working on ways to produce algae biofuel at a lower cost to serve as an alternative to conventional petroleum products.

In a not too distant future, we humans will need to learn to live with nature and not against it. The project “Living Things” is an effort in this direction that celebrates the beauty and qualities of microalgae, creating a symbiosis between humans and microorganisms within the built environment. Consisting of custom glass bioreactors designed as household furnishings, the project demonstrates three vignettes that function differently in each space by cultivating Spirulina algae. These furnishings also function as a lighting and heating elements for the occupants and simultaneously provide heat, light and air supply for the microorganism living inside.

While there are numerous concepts that boast about the ability of algae to power buildings, there’s one that is actually utilizing this capability. The international design firm Arup, worked with Germany’s SSC Strategic Science Consultants and Austria’s Splitterwerk Architects to develop the world’s first algae-powered building dubbed as BIQ House. The building features a bio-adaptive algae façade that not only helps in maintaining the required amount of solar shading, but it also captures solar thermal heat and biomass that can be used to power the building.

The self-powered lamp by Pierre Calleja utilizes the energy-producing capabilities of microalgae to offer light through natural process and simultaneously absorb CO2 from the surroundings. The lamp runs completely free of electricity and uses the energy produced by algae’s photosynthesis process. Pierra explains in his TED Talk that a single lamp has the capability to absorb at least a ton of carbon from the air in a single year, while illuminating the low-light areas.

Algae isn’t just restricted to be used as a biofuel or CO2 absorber, it is equally useful in developing sustainable materials. The biodegradable water bottle designed by Ari Jonsson is an attempt in this direction. It uses a mixture of powdered agar and water with a capability to break down once it is empty. Being an all-natural alternative to plastic, drinkers can also chew the bottle if they like the taste and is safe for both humans and the environment.

Microalgae is already successful in specialty food market. Spirulina, one of the types of algae is gaining popularity as a health food supplement. It is also marketed as an alternative to fish oil since fish gets the omegas by eating plankton. By extracting omega-3, omega-7 fatty acids directly from the crops, it is possible to cut the middlefish. Microalgae is also seen as a livestock feed for animals due to its valuable nutrient composition.

Forget about fuelling your car or powering up your house with algae, the co-founders of ecoLogicStudio, Claudia Pasquero and Marco Polleto has already envisioned an eco-friendly city. They are experimenting the possibilities of building an entire town in Simrishamn, Sweden which will be centered on algae production and research that would eventually drive tourism. The project aims to harvest the algae for energy and food while keeping the environment pollution-free. A map of the project’s design can be viewed at Simrishamn Marine Center.

Developed by Loop.pH in Lille, France, the “Algae Curtain-a” is a living metabolic textile installation made up of transparent tubes that are knotted together to form architectural drapes. During the daytime, living algae is pumped in these tubes to photosynthesize and produce bio-fuel that can be used for local energy requirements, while also providing shading to the occupants sitting nearby.