These mind-bending objects challenge the concepts of physics as we know it.

Physics is amazing! It essentially explains how the entire universe functions and helps us to develop critical thinking and problem-solving skills. From the smallest subatomic particles to largest galaxies, everything around us works perfectly through our known laws of physics.

But there are many curious ones amongst us who go on to challenge these laws that govern the universe and try to build things that defy physics. While it is certainly not possible to circumvent the laws of physics, figuring out ways that try to break these laws often helps in learning something new about the universe.

Here’s a list of 9 such objects/devices that makes us question the physics as we know it!

The term perpetual motion means a never-ending motion or a motion that will never cease. Perpetual motion machines have remained the dream of scientists for a long time, and if practically possible will kick out the second law of thermodynamics.

The perpetual motion see-saw is a concept in which two golf balls and a designed structure is used to create repeating see-saw motion. The continuous left-right motion of the balls causes a change in the center of mass of the structure, which results in an oscillatory motion without requiring any external influences.

While the idea might seem plausible and can make you think that this machine can solve the world’s energy problem, the reality is far different! This mind-bending machine clearly violates the Work-Energy Principle which states that the work done on a system is equal to the change in energy.

In this case, the Net Work done will be zero, which is practically not possible for a closed system like a perpetual motion machine. There is an obvious use of some external energy input, maybe in the form of magnets placed under the table that are doing the job of providing the oscillatory motion.

2. Gömböc – the object that corrects itself

The idea of an object without a brain, automatically correcting itself to rest on a single position can only make you scratch your head. The Gomboc often described as the object which should not exist is one such object, the only one of its kind.

It is the world’s only artificial object that can correct itself no matter how you keep it on the ground. Even though the idea of Gömböc was put forward by V.I Arnold in 1995, the invention of Gömböc as a real object was made in 2006 by two engineers from Hungary, Peter Varkonyi and Dabor Domokos.

The Gömböc is essentially a convex 3D homogenous body which when resting on a flat surface will have only one stable and one unstable point of equilibrium. The density and weight of a Gömböc are consistent throughout, and the way it moves and rights itself is only because of its shape.

This unique object clearly makes us question the physics behind it. While Gömböcs available in the market can cost you a thousand dollars, it is only good to be used as a fancy paperweight if you’re willing to own one.

3. The Uphill Water Fountain – a fountain that flows upwards

The Uphill water fountain was created by the famous James Dyson, the same guy known for inventing the vacuum machines. In 2003, he built a structure at the Chelsea Garden Show in England in which water was seen flowing on an upward slope.

This physics-defying demonstration caught the eyes of many as the water was flowing against the laws of gravity.

The secret, however, was that he made use of compressed air to pump water upwards. The pressurized water between 2 layers of plastic and a thin layer of water running downwards created the perfect illusion of water naturally flowing up the slope.

It turns out to be just another magic trick to annoy physics.

4. One-sided bulletproof glass - protect and shoot at the same time

As the name indicates, this unidirectional glass has properties which enable it to remain bulletproof on one side but lets the bullets through from the other. Even though the ordinary bulletproof glass used in military grade vehicles protects a person from being hit by bullets, it also cripples the person from firing at the enemy from the inside.

At first, this mind-bending glass may seem to defy the laws of physics, but the reality is different!

The normal bulletproof glass that we are familiar with consists of a layer of polycarbonate thermoplastic between the normal glass layers. This gives strength to the glass and makes it tough for a bullet to pass through from both the sides.

The one-way bulletproof glass, however, has a harder as well as a flexible soft layer. When the bullet fired from outside hits the glass, the hard layer flattens and slows down the bullet, which then comes to a stop hitting the soft layer.

But when the bullet fired from the other side hits the glass, it passes through the soft layer easily and stress is induced on the hard layer by the flexible soft layer. This cracks the outer layer and allows the bullet to pass through easily.

5. Starlite – The miracle material which went into hiding

Starlite is a miracle substance which was first introduced to in 1990 through a TV show by BBC. It is a plastic material which was invented by Maurice Ward, which had the properties of being strong, non-toxic and heat proof.

The magical property of this material is that it can withstand large degrees of heat, protecting whatever is kept inside. This property was demonstrated by subjecting an egg coated with Starlite to hot glowing flame for minutes.

Not only did the egg’s shell absorb the high amount of heat but when cracked open, the egg was completely raw.  Maurice never shared his recipe of creating such a potential substance fearing that it could be reverse engineered.

There was a huge potential for his discovery across many applications. However, he died in 2011 without ever patenting or commercializing his invention.

The method of how Starlite was created is still unknown. However, an article published in International Defense Review mentioned that Starlite is a mixture of a variety of polymers and co-polymers with a total of 21 organic and inorganic additives such as borates, ceramics, and other special barrier ingredients.

While the formula of developing Starlite may have been buried along with Ward’s death, there have been many attempts to replicate the properties of this magical material. For example, a Canadian inventor, Troy Hurtubise developed his own version of a heat-resistant material called firepaste.

Remember the spinning top that the actor Leonardo DiCaprio used in the movie Inception to know whether he’s dreaming or awake? A top spinning continuously would mean that he’s inside a dream world, and when it stops, he’s actually in the real world.

But what if there’s an actual, real-working spinning top that spins endlessly? Is that even possible for a top to defy the laws of physics and spin continuously?

Well, a toy manufacturing company certainly tried to make you believe that through their magical spinning top called LIMBO. This mind-bending top will definitely leave you puzzled at first, as it keeps on spinning almost endlessly.

As a matter of fact, the top holds a Guinness World Record for the longest running mechanical spinning top. The exact time duration of its world record spin is 27 hours 9 minutes and 24 seconds.

But if you think that the top has managed to defy physics, you’re wrong! LIMBO’s secret lies inside the housing where there’s a special asymmetric flywheel motor, a high-end motion sensor, a rechargeable battery and an advanced system-on-a-chip that constantly monitors the top’s stability and applies dozens of motion corrections every second to keep it spinning.

The top, rather than defying physics, makes the most use of it!

EmDrive is a controversial space engine from NASA that is developed to realize the ultimate dream of humans – free energy. Originally developed by British scientist Roger Shawyer in the early 2000s, the EmDrive engine generates thrust without using any fuel.

The main concept of EmDrive is to focus microwaves by a metal cone, which can be converted into a thrust that can propel the spaceship without requiring any fuel. The idea, however, violates the Newton’s Third Law of Motion which states that for every action, there is an equal and opposite reaction.

In the case of EmDrive, the third law doesn’t come into play, which is unbelievable as these laws have been governing our universe perfectly. However, NASA published their lab tests of the device last year, detecting some level of thrust in their experiments.

But NASA’s claims were soon put to test by German scientists who built their own EmDrive and tested it in the vacuum chamber. The researchers found that the ‘thrust’ was clearly not coming from the microwave cavity, but was more likely due to a magnetic interaction from the power feeding cables.

Villard's wheel was first introduced in 1245 by a French architect, Villard de Honnecourt. Villard’s wheel is one of the stepping stones of machines created to show perpetual motion in practical.

Theoretically, Villard’s wheel was supposed to be a wheel which continues its motion without a pause or stops. Such an invention would have been a major scientific breakthrough and of course, throw some of the important laws of physics in the bin.

Villard's wheel consisted of an overbalanced wheel to which hinged hammers were fitted. The number of hammers was supposed to be in odd numbers with equal spacing between the hammers. The product was supposed to deliver a continuous rotation of the wheel with the help of the hammers, but it obviously didn’t!

The wheel did not deliver continuous motion, and a backward motion was observed every time a hammer moved which is not what Villard wanted. Since then, there have been many attempts to create such a perpetual motion wheel trying out different designs and materials.

9. The Rattleback – The alien thing

The Rattleback is as a semi-elliptical object which can turn only in a single direction on its axis, either clockwise or anticlockwise. The movement of a Rattleback depends on its design, and a certain amount of ground friction is required for it to work.

The Rattlebacks can rotate only in one direction, and if turned in the opposite direction, it will correct itself automatically after coming to a slight stop. At first, it may seem that this semi-ellipsoidal top violates the law of conservation of angular momentum, but that’s not the case. 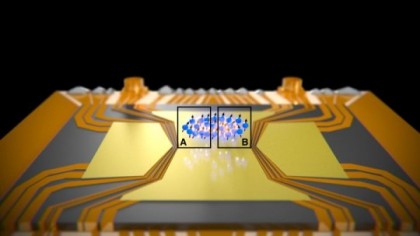 Some Rattlebacks reverse their motion when spun in any direction. These features caused curiosity among many for some time. In 2011, David Tombe presented an article explaining the science behind it, which is nothing but the interplay of forces that we all know – inertia, gravity and friction.

Although these objects designed to defy the laws of physics have always failed, there’s one thing in common among all – the desire to challenge our own scientific concepts and explore the unknown! This very idea often leads to breakthrough innovations that may not defy physics, but do defy our usual ways of looking at things around us.