Want to see some cool new car tech that will change your car forever?

The automobile industry has always been a great example of one "pushing the envelope" of technological development. By 2020, the cars we use from everything to commuting to work to "popping" to the shops could be unrecognizable to us today. There has recently been a lot of new car tech advances that should be of interest to us all.

In the following article, we'll highlight a select few of them.

We'll kick off our list of new car tech with an obvious one. You're probably inundated about progress in this area daily so we won't dwell on it. Note we mentioned partial automation, as it will take more than 5 years before a car will drive about unaided.

It is believed that by 2020 we should have fully autonomous cars that can take over in certain circumstances. This will likely be in rural areas or long stretches of road. A bit like cruise control in the old days.

You must have noticed the switch from actual keys to fobs or keyless entry over the last few years. Not to mention start buttons etc. for the engine. This trend in new car tech is looking like it will render even these obsolete in the not so distant future. Ford was granted a patent for just such a system in 2015.

Developments in this sector mean you'll be able to unlock and start your car with your fingerprint alone. Perhaps even retinal scans. Sounds a lot like some of the latest cell phone security features doesn't it? Well, it should, it's the same concept.

Although somewhat similar to autonomous technology, it's not quite the same. This technology will see the vehicle completely disregarding the driver's commands and make its own decisions. This would be especially useful during potential car crash events. 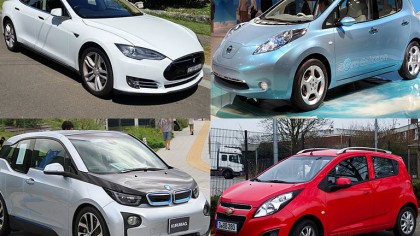 We already have an automatic breaking in some cars that will stop the car should the brakes fail. This, then, is something of a natural progression of the concept. By 2020 cars should be able to apply the brakes even if the driver is pressing down hard on the accelerator.

The rapid increase in sensor technology will eventually give the car itself the final say. We wouldn't be surprised if access to this feature would be open to police forces to prevent car chases etc. This is of course conjecture so don't take us literally.

You may have already seen adverts for this technology from Toyota.

Over the next few years, we should see active glass capable of full-color imaging. Imagine the possibilities of this new car tech. Satellite navigation that could actually highlight the next turn right in front of you as you approach it, for example. Neat.

Ford has recently made progress, but then scrapped, an idea of a seatbelt or steering wheel that would monitor your vital statistics. If you combined this with some form of an emergency autonomous driver "kick-in". This sort of system would have your car pull over and call emergency services in case of a heart attack.

Mercedes is currently developing a form of airbag that will deploy to help stop the car. They plan to have them deploy underneath the vehicle to stop the car before a crash. These bags will form part of an overall active safety system that deploys when sensors determine an impact is inevitable.

These special bags will have a friction coating that will help slow the car down and double the stopping "power" of the vehicle. They will also lift the car up about 8 centimeters that will help counter the car's dipping motion during braking.

With the growing trend in new car tech in electric and hybrid cars, it seems that this trend is not going to slow down. The problem at the moment with them is that batteries take up a lot of space and are very heavy.

European auto manufacturers are currently experimenting with body panels that can store energy. They will also, hopefully, charge faster than conventional batteries today, These panels are polymer fiber and carbon resin that provide strength and reduce the car's overall weight.

The idea is that the panels will capture energy from other technologies like regenerative braking or even from direct overnight charging. They will in effect become the car's batteries.

You are probably already acutely aware of social media ads that seem to intuitively know your spending behavior. It is more than likely that this will soon form a new car tech too.

By 2020, your car might well be fully connected to the internet. This will make your car a powerful information mining tool for advertisers so they can customize their message to you.

We do hope this will be an opt-in feature but do prepare yourself for personalized, location-based ads on your car display. If this leads to some discounts on fuel or hotels then fine, but if you're going to be bombarded with adverts for local restaurants forget it.

Well not quite the "best" new car tech for owners, for insurance companies and governments certainly. You might already have some form of tracking fitted to your car to reduce your premiums. This kind of system might likely get more comprehensive if insurance companies and governments get their way. They are talking about implementing fees based on the total mileage you make.

So long as this remains voluntary this shouldn't be something to worry about. If governments get involved, of course, this is highly unlikely. Watch this space.

So there you go. Our list of some of the 9 best new car tech that will change the future of driving. This is just a selection, there are many more out there. Which ones would you have included? Let us know below.