The LA Auto Show has begun and here are some of the most exciting and futuristic vehicles to take center stage at the event.

It is about that time of year. The auto show season is here; the perfect temporary escape of the holiday rush. Auto Shows also known as motor shows, or car shows are a public exhibition and spectacle of current or upcoming automobile models, concept cars, or even out of production classics. The perfect place for car enthusiasts around the world.

Who usually attends these car soirees? Everyone from the public to automotive industry representatives, dealers, and auto journalists make their way to the shows, eager to see what new innovative vehicles the car world has to offer. 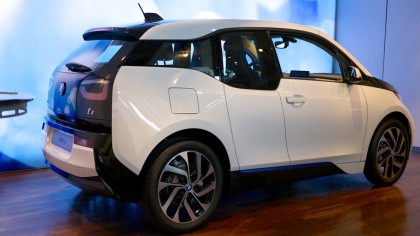 How Safe are Electric Vehicles?

Taking place from November 30 - December 9 of this year, the LA Auto Show is one of the world’s largest car events. The car event showcases well over 1,000 vehicles, which include trucks, SUVs, and electric vehicles.

If you missed out, do not worry, Interesting Engineering has got your back. Here are some of the coolest vehicles, from this year's 2018 LA Auto Show.

Maybe the perfect car for the remote worker in 2021? As one of BMW’s next concept, the vehicle showcased a host of technology that is sure to show up in the next generation of the car company’s vehicles expected to appear in 2021.

The iNext itself has the promise of having a high level of autonomous driving technology and an advanced electric propulsion system.

The buzz around the Audi e-tron GT described the vehicle as a potential “Tesla Killer”. Reportedly coming out in 2021 the vehicle promises a whopping 590 horsepower, with the ability to go from 0-100km in just about 3.4 seconds.

Even more impressive is that the electric vehicle promises an optimistic 248 miles of range and with its 800 volts charger, you could have your vehicle 80% charged in just under 20 minutes.

The interior of the vehicle is just as nice and Audi boasts that the car interior will be completely vegan.

You have probably heard a lot about this vehicle. The Byton K-Byte Concept promises to bring both a high level of comfort and electric performance to families.

The Byton company hopes to create a premium sedan with an advanced electric drivetrain and nearly fully-autonomous driving capabilities.

Inside the vehicle, you will find an impressive 49-inch display screen which acts as the car’s control center for real-time driving information, navigation, and infotainment.

The vehicle will be available for purchase in 2021.

Think of the Rivian R1S as a modern update to the standard SUV that you are so accustomed to seeing or driving. At the LA Auto Show, the Rivian R1S is one of the more unique looking cars the at the showcase with its head-turning front-end design.

Created by an MIT alumni startup, the electric vehicle will host an impressive 410 miles of range off of a single charge with the largest battery installed.

Inside the vehicle, you will find a very comfortable and luxurious looking interior, perfect for those long trips, with its wood accents and premium seats.

Like something out of Speed Racer, the Infiniti Prototype 10 is ready for the future. Though you might not be able to get behind the wheel anytime soon, the car showcases Infiniti’s dedication to design and where it plans to take the next generation of vehicles.

The Prototype 10 is a dynamic single-seat roadster with an electrified powertrain, something perfect to tackle any potential electric races thrown your way.

Like if the 1960s fused with the 2020s the Volkswagen ID Buzz Cargo Concept embodies everything people enjoy about the car company.

Potentially making its debut on the market for consumers in 2022, the fully electric “van” can travel 340 miles off of a single charge.

Another highlight from the LA Auto Show, the vehicle can utilize the solar cells placed on the top of the vehicle’s roof to increase its range by 9.3 miles per day.

Gladiator is an appropriate name for this beast of a vehicle. This vehicle caught the eye of a lot of people at this year’s LA Auto Show.

Impressively, the Jeep Gladiator is 31 inches longer than the Jeep Wrangler and is equipped with a 5-foot bed. Think of it as a compact pick-up truck.

Nevertheless, like the Wrangler, you will be able to remove Gladiator’s doors and roof, plus fold forward its windshield, making it the only convertible pickup. Not to mention the vehicle can even tow up to 7,650 pounds.

This track-ready race car allows you to customizes the suspension settings so you can tackle just about any track layout and course conditions.

The GT R Pro demands your respect. With a design that is optimized for the perfect aerodynamics, the vehicle packs a 577-horsepower 4.0-liter turbocharged V8.

You have waited and its here, the next generation of the Porsche 911. As another staple of the LA Auto Show, the car holds a lot of the design language of previous 911 cars but with small tweaks that are true to the car’s legacy.

Going on sale in 2020, the Porsche 911 will host a range of neck breaking features. The vehicle produces a nice 443 horsepower with its turbocharged flat-six engine.

When released the vehicle will include an eight-speed PDK automatic transmission with a manual gearbox to be added at a later date.

Do you have a favorite car at this year’s LA Car Show?