9 Pieces of Bionic Tech That Will Make You Superhuman

These bionic technologies give us a glimpse of a “superhuman” future.

Bionic technology can be defined as the flow of concepts from engineering to biology and vice versa. The advancement in bionic technology over the years has helped scientists to create various innovative materials that enhance our ability.

Bionic devices such as prosthetic arms and prosthetic legs have even helped people with disabilities lead a normal life. But science fiction has literally raised our expectation, and researchers and innovators all over the globe are putting best of their efforts to build bionic tech that could someday actually make us superhuman.

Here’s a list of applications of bionics that may soon enable us to integrate superhuman powers!

1. H.U.L.C Exoskeleton – Turns You Into A Super Soldier

The H.U.L.C exoskeleton which has a titanium body was developed by Berkley Bionics and Lockheed Martin mainly keeping soldiers in mind. It is a 3rd gen exoskeleton which allows the wearer to easily lift up to 200 pounds of weight and also decreases the amount of metabolic energy required by the wearer.

The exoskeleton essentially provides a person with superhuman capabilities by increasing the strength as well as endurance. The H.U.L.C exoskeleton was made for soldiers to help them march long distances carrying heavy loads with low consumption of oxygen and heart rate.

Strength and endurance are the most important features a soldier requires especially while going on long missions. The exoskeleton increases the endurance of the wearer by lowering the oxygen requirement with the help of proprietary technology fueled by HULC™.

The bionic lens is a proposition by many developers and manufacturers that will have a virtual display and could have multiple uses from improving eyesight to video gaming. A company called Ocumetics Technology Corporation is at the forefront of this technology.

The company has developed bionic lenses that can replace the natural lens in the human eye through the most common cataract surgery. This lens is made from bio compactable, inert and polymeric material that does not cause any bio-physiological changes in the human eye.

It not only is an answer to all the vision-related problems, but it also enhances the human eyes capability. It can focus vision at wider ranges than normal eye by adjusting the curvature of the lens.

This is achieved as the bionic lens is connected to the muscles in charge of adjusting the curvature of normal lenses. The 20/20 vision is improved three times with the help of a bionic lens which enables a person to see things even at a distance of 30 feet.

Above all the most interesting feature of this lens is that it is built with components which allow future access for modifications and upgrades. Preparations for clinical trials are already underway and the company is waiting to receive regulatory approval to perform the surgery.

3. Invisibility Cloak – A Technology that Makes a Person Invisible

The first thing that comes to our mind when we hear of an invisibility cloak is the one used by Harry Potter in the movie. Well, the geeky device in the movie has inspired many and might be developed into a real product very soon.

Researchers from the Montreal National Institute of Scientific Research have been onto this for quite some time and claims to have developed a material invisible to some bands of light using a technology named spectral cloaking.

To achieve cloaking, meta-materials are used which can bend light and give a non-existing appearance to the eye. Many researchers from different places are trying to perfectly develop the technology of invisibility, and if successful, it will have a wide range of security applications in the future.

4. Mind Controlling Helmet – Influencing the Brain Activity for the Better

DARPA has been trying to implement this technology of ultrasonic brain stimulation into a helmet to help soldiers on the field. This helmet will have the abilities to reduce pain, stress, and anxiety, improve the duration of alertness time and enhance cognitive abilities.

The helmets are fitted with microcontroller devices and ultrasound transducers which emit sound waves of high frequency targeting certain parts of the brain. These sound waves are responsible for controlling the mind of the person wearing it.

A large portion of people in the world is insulin dependent due to diabetic problems. These people not only have to keep a control on the food items they eat but also have to go through the trouble of taking insulin regularly.

However, the Juvenile Diabetes Research Foundation is in the process of creating an artificial pancreas which will be able to monitor the sugar levels in the blood and adjust the insulin levels of the body accordingly.

Simply saying, this device combines two existing technologies, a glucose monitor and an insulin pump into one, to create this portable pancreas. Once available in the market it can help people with diabetes (type 1) lead a normal life and save a majority of them from the high risks of having too much or too little blood sugar.

6. Prosthetics For The Brain – A Way To Cure/Enhance Brain Function

You are familiar with the replacement of a knee or a limb, but have you heard about replacing a part of the brain? There have been researches going on to develop technology to replace parts of the brain for some time, and neuroscientist Theodore Berger from the University of Southern California is in the process of developing a chip for the same.

The computer chip being developed by Berger is expected to replace hippocampus which is the part of the brain that controls spatial understanding and short-term memory loss. Hippocampus is that part of the brain which is frequently damaged when a person experience stroke or due to Alzheimer’s disease.

Being able to replace a part of the brain like hippocampus with a chip and restore its function can be a great breakthrough both in the scientific and medical field.

Nuada, a Portuguese company will soon be providing people with a smart glove which will grant the wearer with extra abilities. The gloves have been developed jointly by Vitor Crespo and Filipe Quinaz, and it provides the wearer with great coordination and backhand strength by augmenting the movement of digits and palm.

The gloves have electronic tendons and behave as an electromechanical support body which allows the wearer to perform nearly impossible tasks. It helps to lift heavy objects easily, improves hand grip and allows a person to hold objects for a long time without causing any muscle fatigue.

The Nuada gloves are made up of flexible, breathable, thin and smart textiles which offer comfort to the wearer. It can also be used by a person suffering from hand injuries or people with reduced hand strengths to perform their daily tasks without putting a strain on their hand.

8. Luke Prosthetic Arm – An Arm Similar To That of Luke Skywalker

The Luke Arm is a prosthetic arm named after the famous Luke Skywalker of Star Wars. It was designed by Dean Kamen with funding from DARPA and is the only prosthesis in the market with a powered shoulder.

The Luke Arm is more intuitive than other prosthetic arms available in the market, provides greater grip and is fully automatic. The Luke arm also has the option of being controlled separately with various devices like EMG, IMU Foot Control, Pressure Switch, Pressure Transducer, Rocker Transducer, and Linear Transducer.

The arm uses electrodes to pick up electric signals from the wearer’s muscle and offers more degrees of movement and flexibility. It is without a doubt a great innovation in the area of bionics.

The human ear is an organ without which we can’t think of living a life. Imagine being able to amplify the ability of the human ear using technology. The Here earbuds were developed in Doppler Labs by Noah Kraft and his team.

It allowed a person to change the input of ear as per the need. With this technology in hand, one can easily mute selected sounds, turn up the volume of desired ones, adjust the bass, and much more.

The Here Earbuds made use of a set of microphones to send sound into the ears through a DSP (Digital Signal Processor). These earbuds essentially grant hearing abilities more than what an average person possesses. 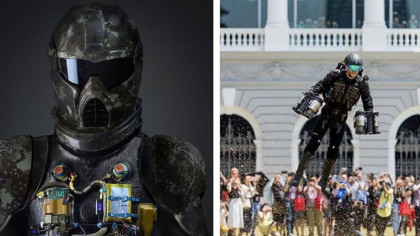 The amazing piece of bionic tech was an ideal solution to provide hearing aid, however, the company had to shut down its operations due to the inability to secure enough capital to keep the business running.

As these bionic technologies are tinkered with and perfected further, gaining superhuman capabilities might become a reality sooner than we think.

Military Advancements That Will Blow You Away