9 Things That You Really Shouldn’t Microwave

Microwaves are incredible things, but there are certain foodstuffs and objects that you really shouldn't microwave.

The invention of the microwave has been one of the most liberating developments in human history. They, like all of the greatest inventions of all time, save you from spending your most valuable asset - your time.

But, whilst they are amazing for heating up a great many things, there are some objects and foodstuffs you really shouldn't microwave.

These 9 are prime examples. Try to avoid these unless you want to send your microwave, or dinner, off in style. You have been warned.

Quite why you would want warm-to-superhot grapes are anyone's business, but it is also not a good idea to microwave them. Grapes are mostly made up of water, so intuitively you might think sticking them in a microwave is safe. 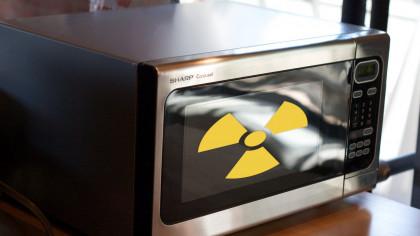 How to Check If Your Microwave Has a Radiation Leak

After all, this is how microwaves work. The problem is grapes are pretty much just water and nothing else.

Their waxy skin and avoid shape makes them perfect for generating plasma balls in your microwave. Whilst this sounds incredibly cool, it can lead to sparks jumping between grapes and potentially causes irreparable damage to the microwave.

Or you could just try it one time to make a potentially viral YouTube video "for science," of course. Though we would never actually advocate doing that, that would be reckless of us.

Thankfully others have taken the risk for you. Cheers.

For those who can't wait to get some dried peppers, you might be tempted to plonk them into a microwave. This would, in theory, save you a lot of time compared to the more traditional method of letting the sun do its thing.

The problem is, by doing this you are potentially going to have a very bad day indeed. Peppers release a chemical called capsaicin when they are super-heated.

You might have heard of this before. It is more commonly known as pepper spray.

Yes, that same stuff that riot police use to disperse crowds as well as self-defence, (whether peaceful or otherwise depending on how authoritarian your government is). It also seems like someone must have done this in a film sometime - surely Stephen Seagal or MacGyver pulled this one off somewhere?

This gas will escape easily from the microwave and flood the room in question. If you or your unsuspecting family are around, it will quickly affect their eyes and lungs.

Whilst some might see this as the perfect prank, as the microwave will otherwise unharmed, it is potentially very harmful.

It goes without saying this is not a good idea. Please do not try this at home.

3. Light bulbs (some people have in the past apparently)

Yes we know, we do hope that someone 'bright spark' hasn't tried this in the past. But it seems, some have done this in an attempt to make the light bulbs "light up" from the microwaves.

The problem is that light bulbs are mostly made up of metal. Microwaving metal things generates sparks that unevenly heats the glass of the bulb.

This usually leads to the bulb breaking. The sparks can also lead to an explosion being generated which has a good chance of ruining your microwave.

If the bulbs in question are of the fluorescent kind, this is not a good outcome. Unlike incandescent bulbs, fluorescent bulbs contain highly toxic vapors that will readily be released into the air.

You do not want to inhale those if you can help it. So it's probably best to avoid this kind of microwave experiment altogether.

4. Eggs in their shells make mine egg bombs

The onus here is on eggs in their shells. There is nothing wrong with cooking an egg yolk and whites in a microwave otherwise.

Eggs in shells tend to heat up faster than normal and their shells tend to help build up the pressure. As you might already know, microwaves work by exciting, or energizing water in food. This tends to result in steam being generated, which is an egg, is contained by the shell.

This is literally a ticking time, well egg, bomb.

Whilst, hopefully, this will simply just make a big mess inside the microwave, it might be strong enough to blow the door of the device. Plus, it is a complete waste of a perfectly good egg.

Don't let that unborn chicken's sacrifice be in vain. Only joking, as everybody knows, eggs are mostly unfertilized chicken "periods" anyway.

Again, why on Earth would you want to stick non-food in a microwave? The mind boggles.

Again, this is generally not a very clever idea. Though it is rumored that by doing so you can simulate a plasma display and interesting visuals by microwaving a CD/DVD.

However, doing this is a potential fire hazard; it can also release toxic fumes. Not to mention risking damaging your precious microwave.

CDs have an aluminum coating that acts as an antenna for microwave radiation. This will generate plasma and sparks.

It goes without saying that the CD/DVD will be completely ruined by the process as a result.

But if you really must try this for yourself, and we stress you really shouldn't, this chap has some advice. Or just watch some YouTube chaps do it for you - it'll be cheaper and safer for you in the long run.

Plastic and microwaving tend to be an unwise decision, but not always. But many people also don't seem to realize that styrofoam also contains plastic.

Whilst you should be ok with any labeled "microwave safe," you should avoid any others completely.

For this reason, microwaving styrofoam is equally a bad idea. Perhaps you've tried this before, but you if you do this you will soon notice that it appears to melt or at least noticeably change shape.

Whilst this is not really an issue, the process can release toxic chemicals. These chemicals can make their way into your food - you don't really want to be consuming those if you can help it.

Just transfer the contents into a microwave-safe container instead.

Never, ever, microwave food completely covered in aluminum foil. Not only is it unlikely to get heated up, thus defeated the object, but it can be potentially dangerous.

The U.S. Department of Agriculture (USDA) Food Safety and Inspection Service even has some guidance on this.

You can use small amounts of aluminum when microwaving food but always consult the manufacturer's guidance before doing so. For example, you can shield some of the food items so long as the foil is unwrinkled and makes up less than 1/4 of the total surface area of the food items.

But be vigilant. If you do start to see arching or sparks, immediately open the door and remove the foil.

8. Sauces without lids ruin your dinner

Whilst microwaving sauces without lids isn't potentially dangerous, it will spoil your day (and dinner). This activity is notorious for causing the sauces to explode in the microwave and makes an almighty mess inside.

This means you will be spending your time cleaning up rather than enjoying that delicious sauce. Such a shame.

To avoid this always make sure you cover it with a lid (not styrofoam or metal as above). It's best to use a microwave-safe lid or paper towel to avoid any unnecessary explosion.

And last but not least, don't bother wasting your time microwaving oil. Not because it's potentially dangerous, but rather because it's completely pointless.

Oil, whilst liquid-like, is mostly fat rather than water. By microwaving it, you are likely to be disappointed by the final result.

After patiently waiting for a few minutes, you will find that your oil will be luke-warm at best. The lack of water content means the microwave will be completely ineffectual.

Moving stuff with your mind? That superpower may finally be here