Little is really known about that huge continent at the bottom of our planet. But the more we learn the more fascinating it becomes. Take these unbelievable facts about Antarctica for example.

Antarctica is one of the most amazing places on Earth. Little is really known about it, but what we have managed to gather, like these facts about Antartica, only adds to its mystery. 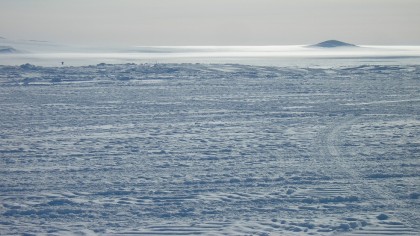 This enormous continent is very remote, incredibly inhospitable and largely untouched by mankind. Locked within its kilometer thick ice sheets are most of the planet's freshwater and it has a wealth of information on Earth's climatic past.

But it's not all about the science. Antarctica is one of the most beautiful, if hostile, places on the planet.

For this reason, amongst others, it attracts around 30,000 tourists each year as well as numerous occupied and abandoned scientific and military installations.

1. Despite its name, there are actually no ants in Antarctica

Amazingly, this is one of the only places on Earth that has never been colonised by ants. Other areas include the Arctic and some remote islands around the world, including Greenland.

But everywhere else you look on Earth you will find at least one native or invasive species of these incredible little creatures pottering around.

In fact, ants are so ubiquitous around the world that they are estimated to form around 15-25% of all terrestrial animal biomass. Given their usual diminutive size, that is a serious number of them going about their business every day.

2. It is a meteorite free-for-all

If you were ever looking for a meteorite supermarket, then book a trip to Antartica. The continent has become renowned for its abundance of fallen space rocks just waiting to be picked up.

That's not to say Antarctica is some sort of meteorite magnet. They do have an almost equal probability of falling anywhere on Earth at any one time.

The reason for its reputation is that the continent has a few key characteristics that make spotting them as easy as pie. Most of it is white, very white, and dark colored meteorites stand out like a sore thumb.

The climate of the continent also tends to preserve them very well - it is very dry. Any meteorite that falls anywhere else, in say the jungle, would quickly corrode and break down.

There are also some ice drifts that tend to pick up and drop them off in the same area. A bit like a giant natural conveyor delivery belt. This means it is the perfect place to grab yourself a piece of alien debris.

3. No ants but it did use to have Dinosaurs

During the Mesozoic (250 to 66 million years ago), Antarctica used to be joined with other present-day continents in the enormous landmass called Gondwanaland. That's why it came as no real surprise when specimens of long-dead Dinosaurs were found on the continent over the last few decades.

To date, only three Antarctic Dinosaur genera have been discovered and described. These include a large carnivorous dinosaur called Cryolophosaurus, a herbivorous long-necked sauropod dinosaur called Glacialisaurus from the Jurassic Period and an armored herbivorous Ankylosaurian called Antarctopelta from the Cretaceous Period.

But it's not just Dinosaurs that are found there. Antarctica actually has a pretty rich and well-preserved reservoir of fossils from its entire geological history.

4. This chap was the first to ever be born there

On the 7th of January 1978, the first ever person to be born on the continent of Antarctica was born. Their name was Emilio Marco Palma and since then ten others have been born there.

Emilio's father was the head honcho of an Argentine Army contingent at the Esperanza Research Base. This base is located near the tip of the Antarctica Peninsula.

His mother was airlifted into the base when she was seven months pregnant to complete her third trimester in Antarctica. Far from being a nice gesture for his father, it was part of an Argentinian strategy over a sovereignty dispute over that specific part of the continent.

Whilst Argentina has claimed this part of the continent as part of their national territory, it is not internationally recognized by other nations. It also overlaps other parts that were previously claimed by the United Kingdom and Chile.

5. Some parts have never seen rain or snow for 2 million years

Whilst large swathes of the continent are buried in hundreds of meters of ice, others are completely ice-free. In fact, around 1% of its area (about 4000 km2) is permanently ice-free.

These areas are called dry valleys or Antarctic oasis. They are some of the driest and harshest environments on Earth and it has been estimated that they have never seen rain or snow in almost 2 million years.

Some studies also appear to indicate that these ice-free zones might expand considerably by the end of the 21st Century. If true, this could have a huge effect on the continent's biodiversity.

Antarctica truly is a land of contradictions. Whilst the vast majority of it being buried under tons of ice, it does also have several active volcanoes.

One of them, Mount Erebus, is actually the southernmost active volcano in the world. This volcano is also the only to have what is known as 'lava lakes'.

These have been able to maintain a body of liquid magma for Eons despite the continents very frigid conditions.

The other active volcano, Deception Island, is buried deep below the continent's ice sheets. It is constantly erupting but you'd never know that from the surface.

7. It is bigger than the continental United States

Antarctica is absolutely huge. Its estimated surface area is somewhere in the region of 14 million square kilometers.

Its size also grows in winter when ice builds up on its coast.

With the surface area of the United States being somewhere in the order of over 9 million km2, it is about 1.5 times bigger. That is absolutely fascinating.

The vast majority of this open space has never been explored by humans. It really is quite exciting to think about what we might find in the future.

Incidentally, it is also almost 60 times larger than the United Kingdom with its surface area of over 240,000 km2.

And that's before we even get onto the subject of some of its icebergs.

8. One of its waterfalls looks like something out of a horror film

Sometimes the names given to landmarks are bang on target. One prime example is Blood Falls in Antarctica.

And it really is a name that suits its reality. Far from being a gushing torrent of blood from hell itself, this is actually a natural outflow of iron oxide enriched saltwater. It can be found on the tongue of the Taylor Glacier in Antarctica.

The waterfall appears sporadically over time as hypersaline water spills out of small fissures in the ice. The source of the blood-colored water is a subglacial pool of unknown extent.

The waterfall was discovered in 1911 by an Australian geologist Griffith Taylor who was the first to explore the region. It is him that it was named after.

9. Antarctica is an enormous freshwater stash

Antartica is estimated to hold the vast majority of the Earth's total ice. Within this ice somewhere in the order of 70% of all the fresh water on the planet is locked up there.

But to put this into perspective, this may sound like a lot but it only represents around 2 % of the Earth's total water supply.

It has also been estimated that if all the ice were to melt global sea levels would rise by around 61 meters. But this would take a major shift in global climate.

The continents location at the South Pole means it receives a lot less solar radiation than the rest of the planet. For this reason, its average temperatures all year round are usually sub-zero meaning any water there spends most of its time as ice.