A pollination link between the evergreen cycads from the Mesozoic Era and beetles from the same period has been established thanks to new research and new fossil evidence.

Much like the excitement that continues to greet scientists in Arctic climates who discover preserved remains of some of our most ancient human relatives in large slabs of ice, we also enjoy the mysteries uncovered by rare finds such as these. 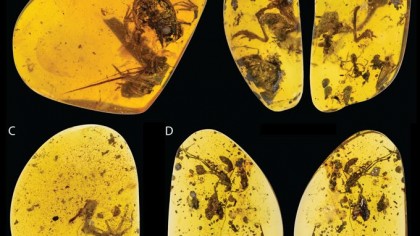 For this reason, perhaps, the discovery of a 99-million-year-old beetle perfectly preserved inside of Burmese amber is generating lots of attention. The insect which lived during the Mesozoic, or Middle Life, era of history, a team of scientists determined, pollinated an ancient plant known as the cycad.

The newfound specimen provided evidence of a link between the insect and the plant after several etymological determinations determined that pollen grains found on the beetle were in fact from a cycad.

The discovery is a new genus and species of beetle, with the appropriately lengthy Latin name of Cretoparacucujus cycadophilus. It is believed to have inhabited large areas which covered southwestern Australia as well as southeastern Africa.

Although this does not fill in all the gaps--for instance, it still remains unclear why the numbers and varieties of cycads have decreased so dramatically since the Mesozoci era, it is an important step.

Already unique in their own right, gymnosperms are a special group of plants which stand out from others thanks to their absence of an outer covering on the seeds as well as their lack of fruit and flower production. This is the reason why this ancient gymnosperm relative is all the more precious.

Chenyang Cai, a research fellow at the University of Bristol, as well as a corresponding author on the paper, unearthed and examined the specimen in what was a 5-year feat. He elaborated on how this discovery fills in some of the information gaps existing about cycads:

"Boganiid beetles have been ancient pollinators for cycads since the Age of Cycads and Dinosaurs," he said, adding, "Our find indicates a probable ancient origin of beetle pollination of cycads at least in the Early Jurassic, long before angiosperm dominance and the radiation of flowering-plant pollinators, such as bees, later in the Cretaceous."

The research goes a long way in proving the strongest claim made by Cai: that these ancient cycads were the first plants in the history of our planet which were pollinated by insects. The impact it could have on theories about biological evolution would be significant.

The team is hopeful that other specimens of this variety will emerge in the future and help to answer even more questions from the past.

Details about the study were shared in an article, titled "Beetle Pollination of Cycads in the Mesozoic", which was published in the Current Biology journal last week.