A team of archaeologists stumbled upon this mysterious granite coffin that was buried beside an alabaster head.

A mysterious granite sarcophagus has been unearthed in Egypt, but experts have still not unearthed the mystery of who is inside the coffin. The coffin that is 8.6 ft (2.6 m) long was excavated in Alexandria, which is on the northern Egyptian coast.

It is believed that the archaeologists weren’t actively looking for the discovery but just happened upon the coffin in a dig. The sarcophagus was found nearly 16 ft (4.8 m) deep inside the ground and was found lying beside a white-colored alabaster head that is speculated to belong to whoever is in that coffin.

This is, indeed, a fascinating discovery for archaeologists. Experts say that it comes from the Ptolemaic Era that started from 332 BCE to 30 BCE. This makes the tomb at least a 1,000 years old.

According to Ayman Ashmawy who works in the Egypt Ministry of Antiquities, the coffin has not once been opened or disturbed since its burial all those years ago, as proved by the undisturbed layer of mortar lying between the lid of the coffin and the occupant’s body.

It is said that the experts will now work towards establishing who is exactly inside that centuries-old sarcophagus, even if it is difficult to know where it came from.

However, this is not the first exciting discovery made by archaeologists in Egypt. Some time back, archaeologists unearthed another fascinating piece of item that was a 2200-year-old coin that illustrated King Ptolemy III, who is an ancestor of Cleopatra.

Another discovery was of a very rare marble that illustrated the head of the Roman Emperor, Aurelius.

Other intriguing finds this year also includes 40 mummies that were discovered in a burial site in Minya that is located south of Cairo. But these mummies weren’t alone. 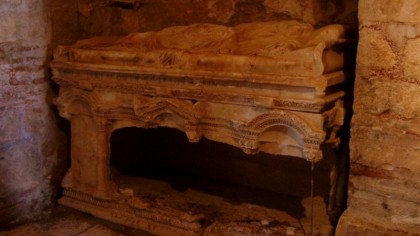 According to reports, these mummies were found buried next to several jewelry items, masks, and pottery pieces. This excavation site, however, might take another couple of years to be completed.

Another discovery this year was the tomb of ancient priestess that dates back 4400 years. This discovery was again made near Cairo, and the tomb was decorated with several paintings of the priestess in various scenes.

Coming back to this mysterious sarcophagus, even though experts do not yet know who is inside the tomb, it is suspected to belong to someone pretty influential of that period, owing to the size of the coffin.

Rest assured, we are sure to hear more such pieces of discovery from the Egyptian soil in the future.

Via: Science Alert, Ministry of Antiquities

4.6-Billion-Year-Old Chunk of an Ancient Baby Planet Found in Africa