A 4,500 Year Old Papyrus Holds the Answer to How the Great Pyramid Was Built

New evidence deciphered from an ancient papyrus puts to bed a theory about how they transported stones to the Great Pyramid site during construction.

A new documentary on British television station Channel 4, explores recent evidence discovered regarding the construction of the Great Pyramid of Giza, this information was etched on an ancient papyrus, found in the port of Wadi al-Jarf, on the Red Sea.

The new information puts to bed exactly how the stone was transported to the pyramid site.

A French-Egyptian team of archaeologists found the records in the 4,500-year-old diary of Merer - an official with a team of 40 elite workmen, who was heavily involved in the building of the huge pyramid which was commissioned by the early, fourth dynasty Egyptian Pharaoh Khufu.

The 146-meter-tall structure was believed to have taken 20 years in total to construct concluding around 2560 BC. The diary describes the lives of workers who built the wonder of the world with their bare hands. From the hieroglyphs and hieratic writings, the researchers were able to decipher three months in the life of Merer. This is considered the only first-person account of life during the assembly of the pyramid.

Using notes from an early 19th-century English explorer, John Gardner Wilkinson as his guide, Egyptologist Pierre Tallet found rolls of papyrus while digging in caves dug into limestone, a few miles inland from the Red Sea. Wilkinson had previously described the location in his travel diary,

“Near the ruins is a small knoll containing eighteen excavated chambers, beside, perhaps, many others, the entrance of which are no longer visible. We went into those where the doors were the least obstructed by the sand or decayed rock, and found them to be catacombs; they are well cut and vary from about 80 to 24 feet, by 5; their height may be from 6 to 8 feet.”

Zahi Hawass, the Egyptian archaeologist, and formerly the chief inspector of the pyramid site and minister of antiquities, told Smithsonian Magazine, that it is “the greatest discovery in Egypt in the 21st century.”

“The century is at the beginning,” Tallet told the magazine in 2015 at one of his digs along the Red Sea. “One must not enlarge this kind of find.”

Despite his hesitation, the text describes Merer stopping at Tura, a town along the Nile known for its limestone quarry. He along with thousands of workers filled his purpose-built boats with tons of limestone casing stone and took it up the Nile, via an array of man-made waterways to Giza, as close to the construction site as possible. 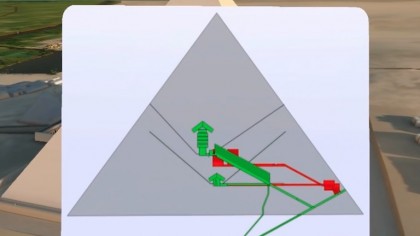 They were then rolled to the foundation on special tracks. Merer also mentions reporting to “the noble Ankh-haf,” the known half-brother of the Pharaoh Khufu. Based on that knowledge, experts now know the person who oversaw the development of the Great Pyramid and the source of the stone used. They also discovered exactly how it was transported to the site.

The papyrus is currently on display at the Egyptian Museum in Cairo.