A Brief History of Printed Money

The history of printed money began in China. With the first government-issued first banknotes in 1023, a new chapter in the history of global finance started.

When you read in the news about countries becoming completely cashless as soon as 2023; perhaps you wonder how human civilization goes from the invention of printed paper money to not using money at all.

SEE ALSO: SWEDEN: HOW TO LIVE IN THE WORLD'S FIRST CASHLESS SOCIETY

Because Sweden is expected to become the world's first cashless society by March 2023, there is also a lot of talk around the beginning of money, how money was invented, when it was invented, who actually invented it.

And how because someone thought keeping everyone's money in his vault was a good idea it led to the creation of the first bank.

A brief history of printed money: How money was invented

The history of printed money is as old --in some ways even older-- than minted money. Coins were invented around 660 BCE. Before that, trade was basically to barter. Goods and products were traded back and forth between tradesmen, artisans, citizens, and officials.

Excess goods were stored either at home or in a kind of community warehouse. It was then when the first methods to keep track of who had what stored where were created. This was one of the contributions leading to the development of writing itself.

If people didn't have enough room in their homes to store their excess goods, they could use the common warehouse. The earliest clay-tablet storage records so far discovered were small, square, and thin bits of clay with a few symbols representing various products and their quantity pressed into the clay. This was then given as receipts to the people depositing their produce in the common warehouses.

Since these products were, in most cases, exactly alike, it is quite likely that people owning such receipts, called IOU (I owe you), began to trade them for other goods or other receipts for different stored products owned by other people in the same or different village. We can say that is was back then when hand-printed on clay money was born.

Later on, with the discovery of metals such as gold and silver, tradesmen began replacing the old technology with the new. Gold and silver coins were born.

Banknotes are commonly referred to as paper money. Yet, a more accurate way of referring to it is as printed money. History has seen money printed on clay, wood, pounded bark, cloth, leather, parchment, metal foils, and most recently, on plastic with paper-like characteristics such as some British pound notes.

According to the International Bank Note Society, Emperor Chen Tsung (998-1022) awarded rights to issue universal bills of exchange to 16 merchants during his reign. During this time, several of these merchants failed to redeem notes on presentation and the credibility of the money was undermined. Consequently, the public refused to accept it.

The first government-issued banknotes date from the year 1023, when the Emperor rescinded the merchants’ issue rights. He also established a Bureau of Exchange within the government charged with issuing circulating paper notes.

During excavations, archeologists found printing plates made of brass from this period. These plates were used to print recreated examples of these early banknotes. According to the International Bank Note Society, sadly, no original-issue notes of this series have survived.

It was Marco Polo who in 1296 made the first reference to paper used as money in the Chinese Empire. Back in Europe, such an idea was so preposterous and unbelievable that Europeans doubted not only about the credibility of his accounts but they also questioned if he had ever traveled and lived in China as he claimed.

When a fragment of an original banknote was discovered in a cave, it was established that it was the oldest banknote existing in the world. This banknote had been issued by the Chinese Emperor Hsiao Tsung. Even though it was not possible to establish a precise date, it is known that this banknote dates from between 1165 and 1174.

The number of coins it represented was depicted on its face. According to the International Bank Note Society, it clearly descended from earlier issues. Yet, no other similar banknotes were ever found.

The first country to adopt banknotes in Europe was Sweden

Stockholms Banco, Sweden's first bank, issued the first real banknotes in Europe in 1661. The bank was founded by Johan Palmstruch, who issued the banknotes as deposit certificates.

Because they were lighter and more convenient to carry than coins made of copper, Palmstruch's banknotes quickly became popular. 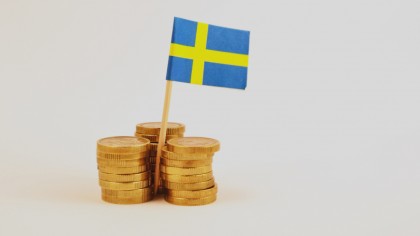 What was special about the credit notes, as they were called, were handed out as loans from the bank. These credit notes could be used to purchase anything. And this was how the first banknotes in Europe were invented.

Palmstruch's banknotes were not linked to any deposit. They were based on the general public's confidence that the bank would pay the value printed on the banknotes in coins upon demand.

The bank printed more and more notes leading to what today is known as inflation. Many people demanded their notes be redeemed, but the bank didn't have enough coins for everyone.

Stockholms Banco then demanded that the loans it had granted had to be repaid. This led to a bank failure as well as many people suffering financial problems.

Johan Palmstruch was sentenced to death for mismanagement of the bank in 1668. He was reprived but remained in prison until 1670. He died a year later.