A team of archaeologists in eastern Turkey has discovered a lost castle in Van Lake dating back several thousand years.

For most of us, the prospect of finding a sunken city is indeed the stuff legends are made of, but for the team of archaeologists in Turkey who are part of a recent find of a lifetime, it’s a reality.

The archaeologists from Van Yüzüncü Yıl University announced the discovery of the 3,000-year-old castle this week. This find is the culmination of a decade of searching the Van lake in eastern Turkey, and the team confirmed that the lake was maintained in surprisingly good condition. Because the castle was several meters deep, the team also coordinated their work with an independent group of divers.

Diving team leader Tahsin Ceylan admits that in the beginning of the project his interest in the project was more about finding the fabled Lake Van Monster, not a lost city: "There was a rumour that there might be something under the water but most archaeologists and museum officials told us that we won't find anything," he shared with a local publication in Turkey.

The castle measures an impressive kilometer in width, with walls that extend as high as 3 or 4 meters in the tallest point. Archaeologists attribute the good condition of the structure to the lake’s alkaline waters. The researchers believe that the castle dates back to the Urartu Civilization, or the Kingdom of Van, which experienced its greatest influence in the area between the 9th and 6th centuries BCE.

Ceylan indicates the Lake’s well-documented fluctuations in levels explains the current state of the castle: "Many civilisations and people had settled around Lake Van," he says, adding about their challenge of separating fact from legend in the Lake, "They named the lake the 'upper sea' and believed it had many mysterious things. With this belief in mind, we are working to reveal the lake's 'secrets'." 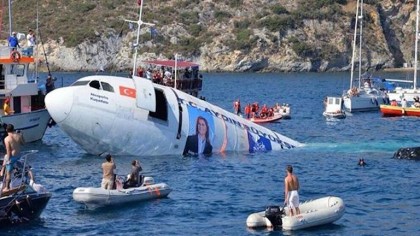 Future diving expeditions will be needed to collect more data about the structure, and its former inhabitants; in addition, the team needs to understand just how deep the walls extend below the lake bed sediment, which all involved are looking forward to: "It is a miracle to find this castle underwater. Archaeologists will come here to examine the castle's history and provide information on it," Ceylan said, elaborating on the progress already made, "We have detected the castle's exact location and photographed it and have made progress in our research. We now believe we have discovered a new area for archaeologists and historians to study."

Compared to Egypt, where the momentum for digging and unearthing ancient sites is in full swing, the discovery of ancient sites in Turkey is more hit or miss—a labor of love. Perhaps because of this, the possibility of being part of an important find feels all the more exciting. One could call this country a kind of archaeologist’s paradise. We look forward to even more ancient treasures being unearthed in these ancient lands.