A very brave woman in China volunteered to have a robot perform dental surgery on her.

Such an innovation could vastly improve the country’s current dentist shortage and frequent surgical errors. It was developed by the Fourth Military Medical University’s affiliated Stomatological Hospital, based in Xian, and the robot institute at Beihang University in Beijing.

Two human medical staff were present to monitor the one-hour operation which took place in Xian, Shaanxi, but they didn’t assist, allowing the robot to carry out the entire surgery, according to South China Morning Post.

Before the surgery, position oriented equipment was fitted to the patient, the robot assessed the patient’s skull and jaw using a CT scanner, researchers then uploaded all the necessary information into the device to complete the procedure using a special marking system.

This information included the angles, movements, and depth required to accurately place the implants, which were fitted within a margin of error of 0.2 - 0.3mm, the standard for procedures of this kind. Luckily for the volunteer patient, it was determined that the robot dentist had inserted the new teeth with a high level of precision.

There’s even a video of the entire procedure, drills and all.

400 million people in China need dental implants, but there aren’t nearly enough dentists on hand to provide the care needed. Only one million are done each year, leading many to go to unqualified individuals to get the work done which obviously leads to more problems.

More and more, robots are being used to address these issues, assisting the country’s dentists with root canals and orthodontic operations as well as training future dentists.

The first dental robotic system was approved by the FDA in the United States this year, developed by Florida based company Neocis, the robot also uses a CT scan to plan procedures, much like the Chinese robot.

Yomi continuously tracks the patient, controlling the direction of the drill while the clinician focuses on advancing into the tissue. Its purpose is to ensure the physician doesn’t stray from the correct location, depth, and orientation of the planned operation. 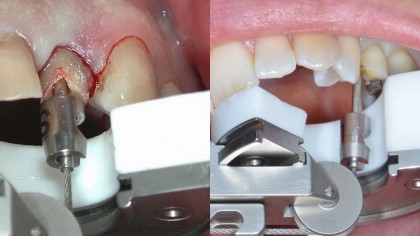 The software also allows for quick plan changes instead of sticking to surgical guides which are prepared ahead of time.

The first robot was sold to South Florida Center for Periodontics and Implant Dentistry in Boca Raton, Fla in March.

“We are excited to incorporate Yomi into our practice,” said Dr. Ganeles, a physician at the center told Business Wire. “Adopting state-of-the-art technology is part of our commitment to providing the very best care for our patients. Yomi ensures that the procedure goes precisely as planned. There is nothing else like it, and I believe it will be a game-changer for our practice.”

Would you let a robot drill into your molars?