Russia is tweaking their new space-bound humanoid robot FEDOR (Final Experimental Demonstration Object Research) to be capable of shooting a gun incredibly precisely- from both of its hands. The new development threatens a new era of warfare; one without human soldiers. 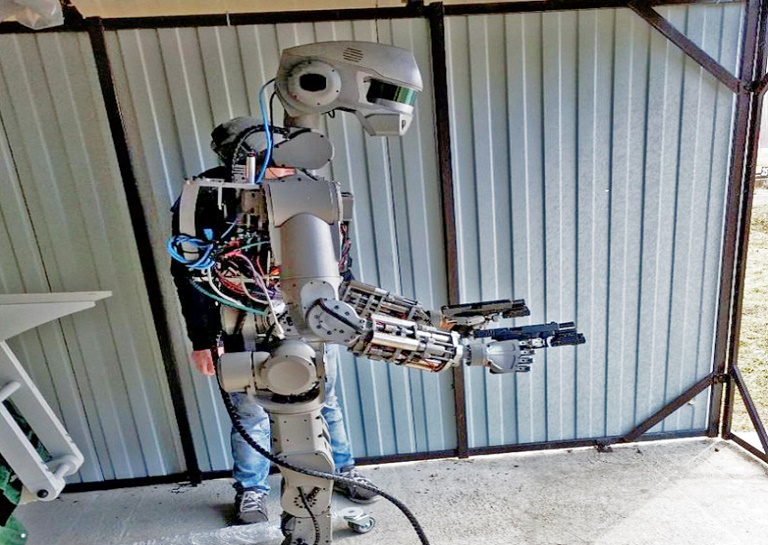 While Russia claims the skill will only be used to improve the android's motor skills and decision-making, many people remains skeptical that a new age terminator may be just over the horizon

“Robot platform F.E.D.O.R. showed shooting skills with two hands, [but] we are not creating a Terminator, but artificial intelligence that will be of great practical significance in various fields."

The showcased video is a short demonstration of FEDOR in action as it shot its dual wielded pistols at a target. Beside it reads  “Russian fighting robots – guys with iron nature.”

The Russian government claims the robot is being prepped for a mission into space in 2021. The idea is to eliminate the necessity for humans to perform dangerous missions. In place, the robot will take over to minimize human endangerment. The android will be able to execute regular service and emergency operation inside and outside of the space station.

Android Technics, a Russian company assisting with the project explains the ambitions of the mission.

The goal - replacing robots human presence to reduce the risk of crew life, reducing the financial costs of maintaining the astronauts life. Ease of use android systems explained humanoid design. The operator, wearing his costume control by the synchronous motions of the driving and control mechanisms it is possible to effectively and most comfortable working implement actions regardless of the distance and environmental conditions.

So far the robot has proven it can work with precise dexterous hand motions as it easily manipulates small objects. The droid is also capable of walking (albeit rather awkwardly). Even more surprisingly is FEDO's ability to drive.

The original intent and purpose of the development of FEDOR was to assist in rescue work. However, its capabilities have rapidly been improved, and now it has proven capabilities in armed warfare.

The robot will be sent into space in the coming few years. While the worry of an armed robot frightens many, Russia assures it is purely intended to benefit humanity and its exploration of the cosmos.

This thing can work without a space suit, live not only in a crew vehicle but even outside it,” Rogozin previously said about FEDOR.

However, the lethal demonstrations cannot be ignored. Though, FEDOR is not the first of its kind to be refined for robotic warfare.

Using high-tech military systems, the robot can perform reconnaissance missions, perform ambush and attacks, or work as a decoy as other operational units move in to eliminate potential threats.

The robot contains advanced military-standard LTE network (Tac4G) enabling communications and making the controls accurate and highly responsive. It contains infrared, thermal, and other sensors enabling it to perform missions at night or with low visibility. The bot weighs around 7 tons fully loaded with 3 tons available for cargo. The articulated vehicle operates as a 6×6 unit that can also utilize tracks to improve on mobility across a larger variety of terrain.

With DARPA, IAI, and now Russia all releasing complex armed robotic vehicles, android warfare is practically imminent. The idea of killing at a distance is not new, however. Currently, armed forces around the globe are using drones for reconnaissance and deadly strikes in enemy territory. With it comes an unprecedentedly complex array of moral dilemmas and gray areas.

The ethics of drone killing

Is replacing the soldier from the battlefield with drones morally better or worse than conventional warfare? Obama has also voiced the concerns raising the profound questions about accountability and morality of killing from a distance. The ethics of drone warfare are complex and unresolved. Despite the complications, Russia insists on arming their robots with weapons.

However, Russia insists that their terminator- like robot is not a terminator. It is rather difficult to grasp the reason and necessity of strapping weapons to a robot if there is no intent to inflict harm. It does raise the question of whether or not replacing the world's human soldiers with robots will save more lives. Live soldiers will be removed from the battlefield, however, one thing that cannot be removed are civilians. Arming robots (and even worse, arming autonomous robots) with weapons dehumanizes killing. Without directly witnessing the brutality of war, soldiers will instead sit behind a screen where there is no physical interaction with civilian life.

It is relatable to drone strikes where a pilot can sit comfortably hundreds of miles away and with a mere flick of a button, mass devastation is inflicted to all those below. Enemies, civilians, and children are all affected. It is an unprecedented problem with no resolution except with the passing of time.