A Drone Just Hit a Passenger Plane in Canada

This event is a first for Canada and comes soon after Minister of Transport Marc Garneau warned citizens to be careful when flying UAVs.

A commercial prop aircraft carrying eight souls, struck a drone for the first time in Canada, according to Garneau. A Skyjet Beech King Air 100 was on approach to Jean Lesage International Airport in Quebec City when it hit a random UAV (Unmanned Aerial Vehicles). The drone in question was flying at around 1,500 feet, 300 miles from the airport, a figure that exceeds the legal limit of 500 feet. Luckily, the more substantial twin prop aircraft landed safely, only receiving minor damage, but Garneau told the CBC, "it could have been a lot more serious."

ATC areas around airports have strict guidelines, meaning any aircraft must have clearance to be there, including drones. According to Canadian law, drones are not permitted above 90 meters (300 feet), the penalty for breaking this law is $3,000CAD. "It's important to note that aircraft are particularly vulnerable when on final approach coming in — the pilot is concentrating on landing properly," said Garneau at a press conference in Montreal on Sunday, as reported by CBC News. Notably, Garneau was also a three-time space shuttle astronaut.

An investigation into the breach is ongoing. If the person handling the drone controls is discovered, they could face a CAD 25,000 fine or a prison term.

This may be the first time Canada has experienced a drone and aircraft collision, but it’s not an uncommon happening in the rest of the world. In April 2016, the pilot of a BA727 flight from Geneva coming into Heathrow, carrying 132 passengers reported to aviation police that the front of the plane had been struck by an unmanned object shortly before landing. 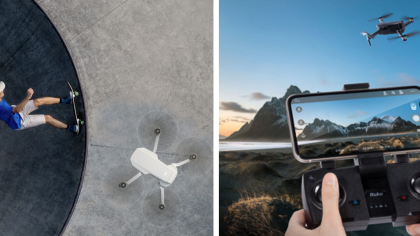 Luckily, the plane and all those onboard were fine, but it was the first time a drone had struck an airliner in UK airspace, calling for stricter laws to be in place to prevent such a happening again.

"Frankly it was only a matter of time before we had a drone strike given the huge numbers being flown around by amateurs who don't understand the risks and the rules, said Steve Landells, flight safety specialist for the British Airline Pilots Association (Balpa) to The Telegraph, at the time.

Worryingly the impact was the result of nearly 23 near misses between aircrafts and drones between April and October in the year before, according to statistics released by the air regulator.

Drone technology is always advancing. Air Drone Craze, an Amazon Services LLC affiliate advertising program website claims that drones have seven potential generations, with the majority of UAVs on the market currently sitting in the fifth and sixth bracket.

Generation 7 drones would have, among other components, full airspace awareness, something of which they are in dire need. Development of these drones is already underway, with the aim of making them safer a top priority. In fact, Ascending Technologies and Intel have signed an agreement to work on a collision avoidance technology and algorithms for UAVs.