The 1022 square feet house took a little more than 2 days to print, and has sparked interest in the construction community.

The house is a four-bedroom property which serves as the perfect model for future projects. The aim is to make the entire concept of housebuilding significantly faster and cheaper.

Could this impact the construction of future 3D-printed homes? Only future will tell!

This new prototype of a 3D printed home is an architect’s dream come true. The highlights of this house are digital controls for the convenience of disabled individuals and the curved-wall designs that substantially alleviate the effects of humidity on the house.

The following numbers are going to leave you staggered. The house took a little more than 2 days to print, in addition to another four months to add roof, windows, and doors to the house.

The construction of the entire house cost around £176,000. This means that the cost of construction done by 3D printing is 20% cheaper than using conventional construction techniques.

In addition to that, the entire process is much quicker than if you were to use traditional building solutions. The 3D printing team believes that they just might be able to achieve the feat of reprinting the same house in a day and a half.

This house was made as a result of the collaboration between the University of Nantes, the city council, and a housing association. The 1022 square feet house can comfortably house a family of five.

The council’s lead innovator, Francky Trichet commented that the primary goal of this 3D printing project was to ascertain if this kind of construction solution could become mainstream and be applied to different types of communal buildings. He now believes that this concept could potentially impact the construction industry. 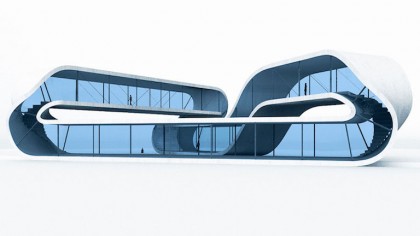 The house is now being inhabited by Nordine Ramdani, Nouria Ramdani, and their three children. Nordine comments on the project saying, "It's a big honor to be a part of this project. We lived in a block of council flats from the 60s, so it's a big change for us. It's really something amazing to be able to live in a place where there is a garden, and to have a detached house.”

The house is initially designed by a team of expert scientists and architects, after which the 3D printer does its job. It prints the layers of the walls from the floor and up. Then the builders fit in the windows, doors, and roofs and voila! You have yourself a 3D-printed home!

Not just this, but the house is extremely eco-friendly with digital controls for the differently-abled. Rest assured, this brainchild of Benoit Furet from the University of Nantes is a significant leap in the arena of 3D printing solutions.